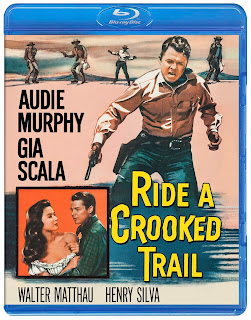 In the 1950s, arguably no studio produced as consistently high quality westerns as Universal. There is a brilliance in their modesty and workmanship—Universal's westerns may not have been super productions, but in the attention to details they achieved a mastery of the form. The writing and editing were as tight as could be achieved, with not a line or a frame wasted, while the direction and photography were elegant if understated. Universal's lineup of western directors included such legends as Anthony Mann, Budd Boetticher, Raoul Walsh, King Vidor, Don Siegel, John Sturges, and William Castle, as well as lesser-celebrated filmmakers deserving of more attention like George Sherman, Lesley Selander, Hugo Fregonese, Jack Arnold, and Jesse Hibbs. It was Hibbs who directed Ride a Crooked Trail (1958), a superb Cinemascope western that is emblematic of the high level of craftsmanship that Universal put into their westerns in the 1950s, and the visual beauty of the film is on full display in Kino Lorber Studio Classics's Blu-ray.

Audie Murphy plays Joe Maybe, an outlaw on the run who assumes the identity of the U.S. Marshal who died in pursuit of him. With only the dead man's badge to prove his identity, Maybe is made sheriff of Webb City by Judge Kyle (Walter Matthau). Maybe plans to use his new role as a cover to plan a bank robbery. Everything is going smoothly until someone from his past who knows his identity arrives on the riverboat, Tessa (Gia Scala). In order to cover himself, Maybe convinces her to pose as his wife. But when she reveals that Sam Teeler (Henry Silva) sent her ahead to scout the bank for their own robbery, it's only a matter of time before his cover is blown and he'll have to make a decision about whether he's an outlaw or a lawman. 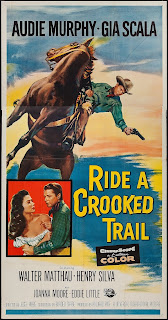 Ride a Crooked Trail is what today we might call a "noir western" because it plot resembles the sort of darker crime stories that were prevalent at the time. And like much noir fiction, moral ambivalence runs deep in the film, and is most prominently seen in the name of its protagonist, Joe Maybe. Not fully good, not fully bad, Maybe is somewhere in between, undecided about who, and what, he is. The excellent script was written by one of the best western writers in Hollywood at the time, Borden Chase—Red River (1948), Winchester '73, Bend of the River (1952), The Far Country (1954), and Backlash (1956) are just a few of his credits. Chase's script was based on a story by George Bruce, a prolific writer of the time who is mostly forgotten today. He was such a prolific pulp writer that at one point he had his own line of aviation pulps, including George Bruce's Squadron, George Bruce's Contact, and other similarly-titled magazines. The movie's credits don't indicate that this is based on a short story, and Bruce had transitioned from the pulps to Hollywood in the mid-1930s, so I assume that this was an original screen story and not an adaptation.

A funny aside about Bruce—fellow pulpster-turned-screenwriter Frank Gruber remembered a party Bruce threw in his memoir, The Pulp Jungle. Gruber recalled Bruce's writing routine, which he would allow nothing to interrupt.

George Bruce, who had a temporary apartment in Brooklyn, gave one. It was a rather small apartment and the thirty-some guests who were there were jammed into the place so that you could hardly move around. About ten o’clock in the evening George announced that he had a deadline for a twelve thousand-word story the following morning and had to get at it. I assumed that it was a hint for the guests to leave, but such was not the case at all. George merely went to his desk in one corner of the room and began to bang his electric typewriter. George sat at that typewriter for four solid hours, completely oblivious to the brawl going on around him. At two o’clock in the morning he finished his twelve thousand words and had a drink of gin.

As a director, Jesse Hibbs is an austere stylist. He may not be flashy but his compositions are bold and dynamic with a rich color palette, and he has an eye for both exterior, location shooting as well as studio-bound interior scenes. Hibbs also displays subtle but effective directorial touches (one of my favorites how the camera rocked back-and-forth when Maybe wakes up on Judge Kyle's houseboat, which must have made for one hell of a hangover). Before he was a filmmaker, Hibbs was a college football player at USC (alongside John Wayne) and even played pro with the Chicago Bears in 1931 before changing careers and became a filmmaker. Starting in the mid-1930s, Hibbs paid his dues for nearly two decades as an assistant director—including Anthony Mann's Winchester '73 (1950) and William Castle's Cave of Outlaws (1951)—before becoming a full-fledged director. Between 1953 and 1958, Hibbs directed 11 features, five of which were westerns, and six of which starred Audie Murphy (including the 1955 biopic To Hell and Back, where Murphy played himself). Ride a Crooked Trail was Hibbs's last feature before he transitioned to a television director, where he worked on Gunsmoke, Perry Mason, and Rawhide, among many others. 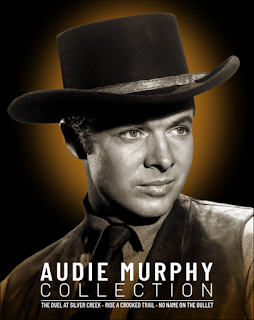 Much could be said about the excellent cast of the film. Audie Murphy, the legendary WWII hero, is not your typical western star. His sweet, perennially youthful face and diminutive stature contrasted with his hardboiled attitude and the complex, morally ambiguous characters that he played. His style of acting is representative of the shift in the genre in the 1950s towards more adult and realistic characters. Matthau, as the Judge, is having a blast as he alternates pontificating and imbibing gin and whiskey. Gia Scala, an English-born actress of Italian and Irish parentage, was a terrific actress who appeared in many wonderful roles—including the noir The Price of Fear (1956) and The Guns of Naverone (1961)—before dying of an overdose of sleeping pills in 1972 at age 38. Her character here is refreshing and non-stereotypical female role for the genre. She's smart and crafty, and like Murphy she gets to play a complex character who is both a little good and a little bad, and the film doesn't judge her for choice of occupation. The most striking feature of her character is her intelligence. As a scout for the gang, she's responsible for integrating herself into the community and single-handedly planning the robbery. She and Murphy are perfect foils for each other, cut from the same cloth, and after the same goal, but not playing for the same team. Their repartee is based on their dialogue and under-handed attempts to thwart each other's plans and not physical romance. And Henry Silva—where to begin with such a legendary actor whose performances are always top notch and whose presence elevated every production, and every, scene that he was in? 30 years old in this movie, he had already been acting for close to a decade. His lines in the film are few, but his presence is immense—he communicates so much with his body language and his eyes.

Clocking in at 88 swift, utterly delightful minutes, Ride a Crooked Trail is everything I want out of a western. It's available from Kino Lorber Studio Classics as part of the Audie Murphy Collection alongside Don Siegel's Duel at Silver Creek (1952) and Jack Arnold's No Name on the Bullet (1959), two other great westerns that are not to be missed.