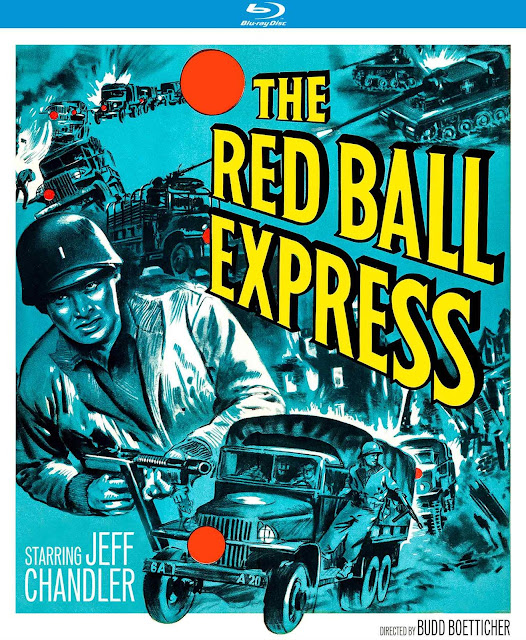 Red Ball Express (1952) is a stunning example of a rare breed of movies, transportation noir, alongside Thieves' Highway (1949), The Wages of Fear (1953), Blowing Wild (1953), The Long Haul (1957), and Sorcerer (1977). While its World War II setting might superficially set it apart from its more criminally-preoccupied brethren, Red Ball Express shares with them a similar existential crisis, an almost nihilistic drive towards suicide. Trucking becomes a vessel for bringing out darker impulses in its characters, and for that reason I think it deservedly should stand alongside those other films in the transportation noir subgenre.

Red Ball Express tells the story of a group of soldiers who must create a route through mined roads in order to deliver armaments to General Patton. In order to get all the supplies to him, Lt. Chick Campbell (Jeff Chandler) insists the soldiers drive all day and all night, and turn around on another run as soon as they return. The grueling work tests the limits of his men and pits them against each other, including Corporal Andrew Robinson (Sidney Poitier) who is fighting racism within the unit, and Sgt. Red Kallek (Alex Nicol), who carries a personal vendetta against the lieutenant.

What could have been a straight-forward B-movie in other hands is uplifted by extraordinary talent on-screen and behind the camera. The script was the first film written by legendary screenwriter John Michael Hayes (who went on to write four Hitchcock classics, Rear Window, To Catch a Thief, the James Stewart-Doris Day Man Who Knew Too Much, and The Trouble with Harry). And directing the film is Budd Boetticher, still several years away from his masterful collaborations with Randolph Scott. But even in this early film, he's a master of hard-boiled, unsentimental action (though there is the occasional moment of brief humor). His direction is as instinctive, decisive, and as direct as his characters: everything is understated, and told in as few words as necessary. Not a frame, gesture, or line of dialogue is wasted in Red Ball Express, it's emblematic of Boetticher's style, pure economy and poetry. 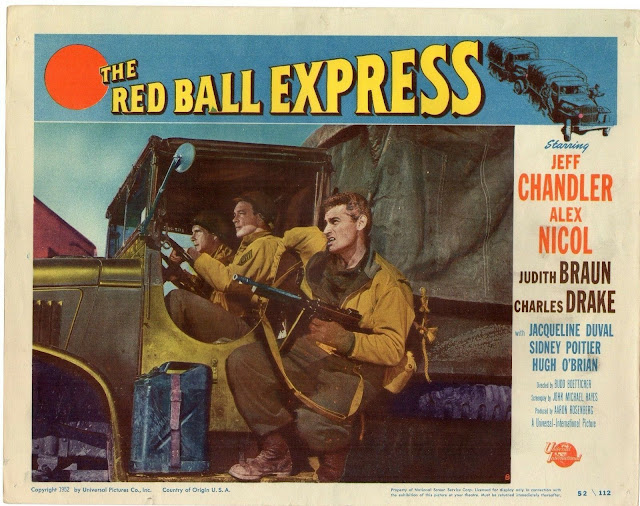 In a movie about driving, there no one more important for keeping the story moving ahead than its editor, and keeping the pace of Red Ball Express is a true cinematic veteran, Edward Curtiss. He never lets up the gas and turns the movie in at a relentlessly swift 83 minutes. Curtiss's expertise is the result of decades of cutting pictures, beginning with Lon Chaney films such as The Hunchback of Notre Dame (1923) and The Phantom of the Opera (1925), and going on to do more than 100 films and tv episodes including Howard Hawks's The Criminal Code (1930) and Scarface (1931), Jules Dassin's Brute Force (1947), Anthony Mann's Winchester '73 (1950), and the underrated Wyoming Mail (1950) (a personal favorite). Curtiss also worked with Boetticher on Bronco Buster (1952) and City Beneath the Sea (1953).