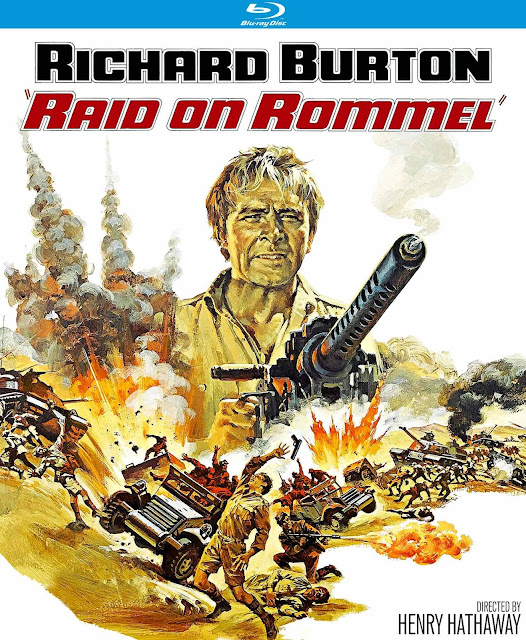 Hollywood, for a couple decades, engaged in a continuous production cycle of WWII movies. At first it was a contemporary topic, then it was propaganda as part of the domestic homefront effort, and then, after the war was over, it was seemingly an endless well of stories for filmmakers to pull from. Well into the 1960s, WWII blockbusters continued to be massive successes, such as John Sturges's The Great Escape (1963), Otto Preminger's In Harm's Way (1965), and Robert Aldrich's The Dirty Dozen (1967). 1970 was a watershed year for American WWII movies, with Phil Karlson and Franco Cirino's Hornets' Nest, Mike Nichols's Catch-22, Brian G. Hutton's Kelly's Heroes, Franklin Schaffner's Patton, the international co-production with Japan Tora! Tora! Tora!, Paul Wendkos's Hell Boats, Robert Aldrich's Too Late the Hero, Jerry Lewis's Which Way to the Front, The Last Escape, and Underground.

Raid on Rommel (1971) was released at the tail end of Hollywood's WWII cycle. It was the only American WWII-themed movie produced that year, and none would be produced until Operation: Daybreak (1975). Hollywood was by no means done with WWII movies, and they continue to produce such movies to this day, but Raid on Rommel marked the end of an era in which WWII was a dominate topic for Hollywood cinema.

Despite being a late entry in Hollywood's WWII cycle, Raid on Rommel still feels fresh, exciting, and singular, and it manages to distinguish itself from its predecessors through its unique narrative construction. Unlike most mission-based movies that begin with a goal and then base their story around the attempt to achieve it, Raid on Rommel begins by disrupting the plan and plunging its characters into uncertainty.

Captain Alex Foster (Richard Burton) lays into the Libyan desert pretending to be injured so that he can be captured by German soldiers. He is expecting the Germans to be transporting a commando unit that he can partner up with and find a way to sabotage Rommel's forces at Tobruk; instead, he finds that his fellow prisoners are a medical unit that hasn't been trained in combat. Thus begins a series of struggles: can Foster and the medics overpower their captors; if so, are the medics capable of infiltrating Rommel's entire tank corps at Tobruk; and just how, exactly, can they sabotage Rommel so that the Allies have a chance of invading? The script is the only feature film written by Richard M. Bluel, a prolific television writer of the time, but Bluel succeeded in writing an unconventional yet still thrilling story.

Directing the picture is Hollywood heavyweight Henry Hathaway, who got his start directing B-Westerns forty years earlier. From his early Randolph Scott films like To the Last Man (1933) and Man of the Forest (1933) to mid-career films like Rawhide (1951) to late films like True Grit (1969), Hathaway always had an eye for the great outdoors, an affinity for rough, hard-lived characters, and an instinct for tense stories of physical struggle. Raid on Rommel displays all of Hathaway's hallmarks: an unsentimental, hardboiled sensibility; a highly pragmatic story acted out by rugged characters; and a pitch-perfect eye for capturing natural landscapes.

Kino Lorber's Studio Classics Blu-ray is, as usual, a spectacular presentation, with smart commentary by Steve Mitchell and Steven Jay Rubin, and an interview with Clinton Greyn, who played medical officer Major Tarkington.
at August 06, 2020