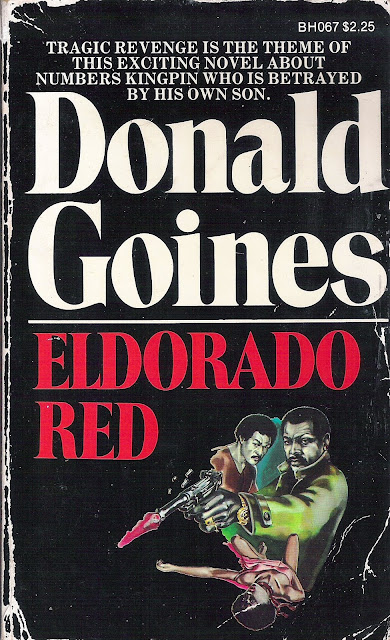 Donald Goines's Eldorado Red is a taut and vicious cat-and-mouse thriller about a numbers kingpin mercilessly tracking down a group of thieves who are systematically hitting his houses. Originally published in 1974 by Holloway House, this was Goines's fourth novel in two years, and it was based in part on his own experiences holding up a numbers house. "Goines knew of that which he wrote: he had served time for attempting to rob a numbers house in Detroit," writes Kinohi Nishikawa in "The Radical: Donald Goines in the Wake of Civil Rights" from Andrew Nette and Iain McIntyre's superb literary history book Sticking It to the Man: Revolution and Counterculture in Pulp and Popular Fiction, 1950 to 1980. "His representation of the robbery and its violent fallout show the lengths to which people are willing to go to claim their stake in the ghetto’s most lucrative underground venture."

Set in Detroit, novel begins with Shirley showing Dolores the collection route for Eldorado Red's network of numbers houses. While doing their pickup, they are surprised by the cops and arrested. Meanwhile, Red has reunited with his estranged son, Buddy, who grew up living with Red's ex-wife, and has trusted him with cleaning up the numbers houses at the end of the day. Behind his father's back, Buddy has used this information to plan a string of robberies of his father's businesses. As Red and crew narrow down the list of suspects who know the locations of the houses, it is only a matter of time before they nail Buddy for the crime. And with every second counting, Buddy and his crew decide to hit more houses while they still can.

In the atlas of crime fiction, Goines wrote some of the most hardboiled streets of them all, and Eldorado Red is noir at its grittiest. Goines lead a life as hard and punishing as the characters in his novels. Born in Detroit in 1936, he enlisted in the Air Force in 1951 by lying about his age. He was only 15. Serving in the Korean War is where Goines first developed his heroin addiction. Returning from the war, he took to crime to support his habit. "He spent the next decade and a half in and out of jail," Kinohi Nishikawa explains in "Donald Goines and the Birth of Black Pulp Fiction," "serving time for charges ranging from bootlegging to attempted larceny,"  As Greg Goode describes in his essay "From Dopefiend to Kenyatta's Last Hit: The Angry Black Crime Novels of Donald Goines," Goines began writing while still in prison after being inspired by Iceberg Slim's Trick Baby. His fellow inmates encouraged him to send his debut, Whoreson, to Slim's publisher, Holloway House. They loved the book, and Goines's career as a novelist was born. 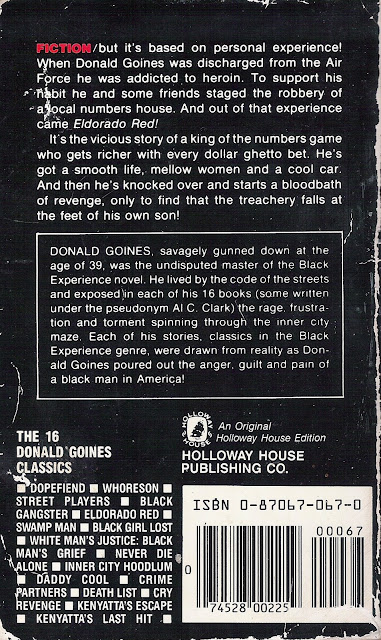 Superficially, Red may resemble Mickey Spillane's hardboiled archetype Mike Hammer in their shared machismo, misogyny, and violence, but Red's actually much closer in spirit to the enterprising capitalists of W.R. Burnett's novels. Like his literary predecessor Little Caesar, Red is out to take no less than the world. Also like Burnett, Goines writes of a world thoroughly consumed by notions of profit. As Greg Goode describes in "From Dopefiend to Kenyatta's Last Hit," "Goines's ghettos are like zero-sum-game societies in which one man's gain must be another's loss."

In the midst of this cutthroat novel, Goines interjects unexpected moments of human warmth. After Shirley and Dolores go to collect from Auntie Dee, they wonder why Red keeps her on when her take is so little. It is explained that Auntie Dee's brother used to handle things, and she took over after his death. Red understands that without the small commission she makes doing this work she would have nothing. It's an interesting relationship that goes against Red's capitalistic streak because he gives more to Dee than he gets in return. Goines doesn't delve too deep into this relationship, but it is in stark contrast to the rest of the novel, in which all of Red's relationships are transactional at best. Even Red's own son is trying to rip him off. Red and his girlfriends treat each other like objects—neither of them see any permanence or deep affection in each other. And while Red has many workers who are loyal to him, his strength exists only as long as they continue to be loyal to him, and that loyal lasts only as long as his money and protection holds out. Red's reign is tenuous—and while Goines doesn't spell it out, it's clear that his character understands that implicitly. 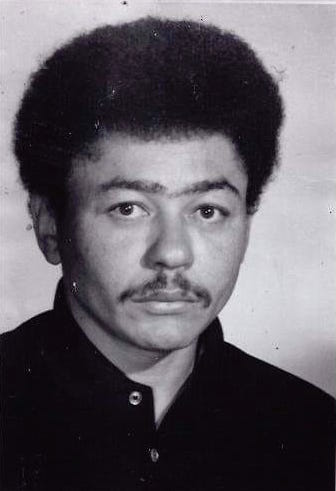 Another unusual aspect of Eldorado Red is its ending—or, rather, lack thereof. Goines didn't write a "crime doesn't pay" or a "crime does pay" narrative, nor did he write a conclusion that even tied up loose ends. Eddie B. Allen, Jr notes in Low Road: The Life and Legacy of Donald Goines, "Unlike the protagonists in most of Donnie’s stories, however, Red is not given any comeuppance in the end. Problems are corrected to his satisfaction, and he suffers no consequence for his complicity in the retaliation." The immediate problems may be solved, but there is no real resolution or conclusion in sight. Goines wrote Eldorado Red as a novel without catharsis, and its ending suggests a Sisyphean cycle in which Red and his remaining crew are trapped.

Goines's reality was as rough and merciless as the world he wrote about. In 1974, he and his wife were found murdered in their home. He was 37 and only had been publishing novels for 3 years, during which time he wrote 16 novels. Goines, like Red, was trapped by the streets from which he arose.