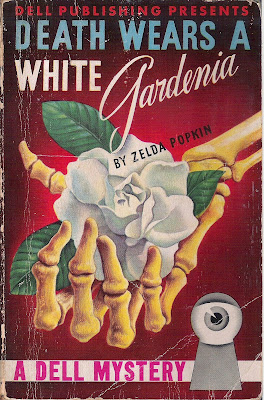 Death Wears a White Gardenia was the first novel by Zelda Popkin, published in 1938, and introduces her series sleuth Mary Carner. Carner is an absolute gem of a character, a fast-talking, sharp-witted New York City department store detective. She's as tough and street smart as the Big Apple, and more crafty than the thieves she busts.

In this first outing, Carner and her boss, Chris Whittaker, have to solve the murder of Andrew McAndrew, the credit manager of Jeremiah Blankfort and Company department store, whose corpse found stuffed in a sample room near a suitcase of stolen merchandise belonging to Joseph Swayzey, a notorious thief and cocaine addict who Whittaker has dealt with before. Adding to the pandemonium, it is the store's fifty-first anniversary and they are hosting a big sale and ribbon cutting ceremony with the governor's wife, and Mr. Blankfort doesn't want murder—or the NYPD—to close down the store or disturb the customers. Carner and Whittaker have their hands full, and their biggest clue is the white gardenia in the dead man's hands.

Death Wears a White Gardenia is a fabulously fun murder mystery with the right blend of genteel, light-hearted humor and big city, hardboiled attitude. Popkin does a stellar job of creating a realistic department store atmosphere with a large cast of characters. The female characters, in particular, shine in this story, from Carner to the secretaries, they come off with authentic New York City attitude, liberated working girls who know how to survive in the city and who speak their mind. 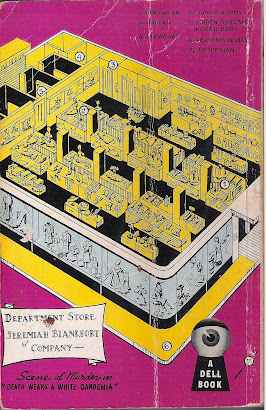 Hollywood really missed out on Death Wears a White Gardenia. With its colorful cast of catty sales workers spewing gossip about affairs, jealousies and grievances, all set within the glamorous confines of a multi-level Fifth Avenue department store, Death Wears a White Gardenia would have been a perfect match for a 70-minute Warner Brothers movie starring Joan Blondell or Glenda Farrell. Their stock company of character actors who could create a memorable cameo with just one line of dialog or facial expression would have really brought Popkin's story to life.

Popkin's life and career was profiled in an enlightening article by her grandson, Jeremy Popkin, called "A Forgotten Forerunner: Zelda Popkin's Novels of the Holocaust and the 1948 War" that was published in Shofar in 2001. Jeremy notes that she was born as Jenny Feinberg in 1898, and that her parents were Jewish immigrants who settled in Wilkes-Barre, PA. Zelda was a professional journalist by age 16, then moved to New York to study journalism at Columbia University. She and her husband, Louis Popkin, started a PR firm together. Her husband died in 1934, and after that she left the PR field and returned to being a full-time writer.

Zelda Popkin was a prolific author of both novels and articles. Her character Mary Carner went on to appear in four more novels, Time Off for Murder (1940), Murder in the Mist (1940), Dead Man's Gift (1941), and No Crime for a Lady (1942). Her non-mystery novels include The Journey Home (1945), about a returning soldier's encounter with a woman during a train accident, and Small Victory (1947), an early novel that deals with the horrors of the Holocaust and was based on her own experiences in Germany with the American Red Cross. She published an autobiography, Open Every Door, in 1956, and her last novel was Dear Once and appeared in 1975. Zelda Popkin died in 1983 at age 84.