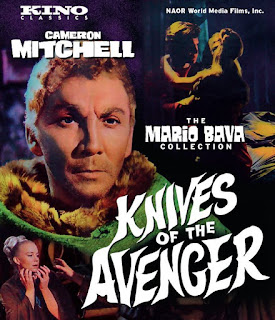 Kino Lorber's on-going commitment to presenting the films of Mario Bava on Blu-ray is revelatory, displaying the Italian director's work in all of their visual majesty. Even a film like Knives of the Avenger (I coltelli del vendicatore, 1966), not heralded as one of Bava's masterworks, is simply stunning to behold. It was made right in the middle of his career as a director, in between his early career-defining hits and late-period masterpieces: behind him were Black Sunday (1960), Black Sabbath (1963), The Girl Who Knew Too Much (1963), The Whip and the Body (1964), Blood and Black Lace (1964), and Planet of the Vampires (1965), and still to come were Danger: Diabolik (1968), Five Dolls for an August Moon (1970), Hatchet for the Honeymoon (1970), Bay of Blood (1971), Baron Blood (1872), and Rabid Dogs (1974). Though he is best known for his horror films, Knives of the Avenger is not the only Viking film that he made; five years earlier he made Erik the Conqueror (Gli invasori, 1961), which also shared the same star, Cameron Mitchell.

A cinematic Poe, Bava was a poet with the camera, and his dynamic yet sensitive compositions captured the essence of the fantastic and the uncanny—both the allure as well as the grisly aspects of horror—and in Knives of the Avenger, Bava shows he's equally adept at capturing the serene beauty and the brutality of a viking revenge story. A muted palette of dull tans, grays and blues—beaches at dusk, the insides of huts and caves shrouded in darkness—is punctuated by deep greens and bright reds—lush forests, vibrant hills of grass, and of course the hellish hues of first and blood, without which no Bava film would be complete. 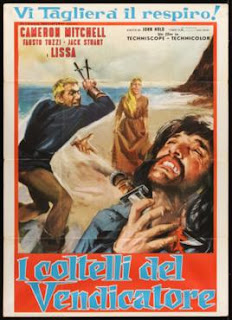 Filmed in Techniscope (a budget anamorphic alternative to the most well-known Cinemascope), Knives of the Avenger is a cinematic contradiction: an epic expressed as a chamber drama mainly due to economic constraints. As Bava biographer Tim Lucas explains in his characteristically detailed and illuminating commentary, Bava took over production from another director and had only a handful days to re-write the film, choosing to scrap most of what had been completed and start fresh. The resulting film was, as Lucas called it, a Viking version of Shane, in which a man longs to escape his violent past by joining a family, however his need to protect the family means he cannot forget his roots.

In Knives of the Avenger, a wandering, knife-throwing warrior, Helmut (Cameron Mitchell), approaches a farm and meets a Karin and her young son, Moki, whose father, Aarald, is away on a journey. Hagen, a ruthless warrior whose recklessness sent the region into warfare years before with rival warlord Ruric, has returned to capture Karin. He sends a band of soldiers to kidnap Karin and Moki, but Helmut intervenes to save them. What unfolds is a like a Shakespearean tragedy: Ruric longs to atone for past sins by protecting Karin and Moki, Hagen longs to steal Karin from her husband, and Aarald has vowed to kill the warlord Ruric who raped Karin and murdered his father, the former King. 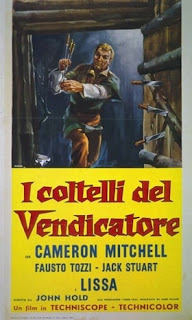 I watched the film twice—first in Italian with English subtitles, and then a couple days later with Tim Lucas's commentary. The first viewing was enjoyable—Bava's visual style is always a treat for the eyes, and I found myself immersed in the film's reserved tone, solemn and grim—but the second viewing was particularly eye-opening. From the first scene, Lucas reveals artistic touches that linked the film with others throughout Bava's career, as well as highlighting subtleties in the composition, lighting, acting, and script that deeply enriched my experience, in addition to providing contextual histories about the production and the people involved.

While it might be minor work, Knives of the Avenger is nonetheless a prime example of his artistry and economy, and it is a testament to his vision that he was able to imbue such a hasty project with such personal details and dramatic depth.
at July 20, 2020