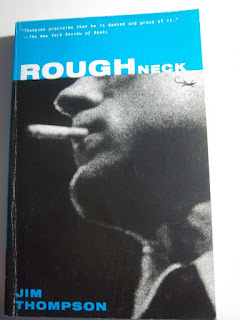 One can't read Bad Boy, part one of Jim Thompson's personal odyssey, without reading its companion, Roughneck (Lion, 1954). Picking up the exact moment where the previous book ends, page one finds Thompson and his family fleeing from Capone's mob when their car breaks down. Now, they're stuck in Oklahoma City in a rundown Model T, en route to Nebraska, the closest thing to a Holy Land that they know, while being pursed by ripped-off racketeers who want their money. Thompson hits up an old family friend, someone who Thompson's father helped clear through Ellis Island and helped set up for business here in Oklahoma City. Of course the man remembers Mr. Thompson and would be happy to repay the gratitude. How happy? $5. Once again, they're screwed, and once again, Thompson and his family manage to scrape by and survive until the next problem arises.

Whereas Bad Boy was largely a collection of family anecdotes and early misadventures of young Jim, Roughneck is more of a solo-Thompson adventure. We see more of the locales and landscapes that will populate his novels (the sleazy hotel of A Swell-Looking Babe, the oilfields of South of Heaven), but we also see the evolution of journeyman Thompson to journalist Thompson as he gets his first jobs at newspapers and then goes to college (even these turn into farcical, slapstick escapades). He goes from factotum to philosopher, and from a lost soul drifting with the wind to one of the great chroniclers of the squalid side of the American dream. In a way, Thompson is a great complement to someone like Steinbeck. Both writers are revealing of the American landscape, its characters, and the jobs and lives they lead in order to survive.

But what's amazing is how this change in Thompson was so natural. It wasn't like he woke up one morning and decided to turn his life around and become a writer. On the contrary, somehow running booze and working on pipelines and writing the occasional story turned into going to college for agriculture (instead of writing) and even though he didn't have any money he had to work crazy night shifts to pay the bills and, well, you see where I'm going. It was all just part of this extraordinary life. Reading Roughneck, you see how the fabric of Thompson's fictional world comes straight out of his life.

Hell, it's amazing that Thompson even survived to tell the tale. But I'm sure glad he did. Roughneck (along with Bad Boy) is essential Thompson. His own life is one of his best stories.

Available from Mulholland Books.
Posted by Cullen Gallagher at 5:47 PM