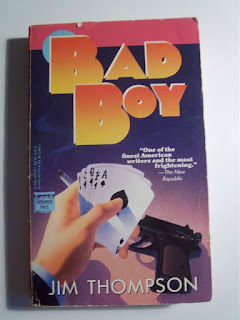 Originally published by Lion in 1953, Bad Boy is an act of self-mythology, a brazen, breathtaking, and bonkers Bildungsroman that recounts Jim Thompson's formative years, from a misshapen baby who was pinched too often to a whiskey runner for Al Capone's mob. In between those two touchstones are twenty some-odd years of adventures and misadventures in the American mid-west during the first three decades of the twentieth century.

Written with the wondrous and lyrical wanderlust of an oral history, it is only somewhat chronologically structured, and Thompson will interrupt himself for tangents and asides, imbuing the narrative with this magnificent spontaneity. These are the types of stories one might hear sitting around a family table, recalling the good, the bad, and the ridiculous times of yesteryear. Of teenage Thompson being left in the care of his grandfather while the rest of the family is away, which turned into drinking hot toddies, catching movies, and spending the afternoons in burlesque clubs eating sandwiches. While this anecdote shows the seedy setting that might appear in any of his fictional novels, there's also a great deal of warmth and communion to the way Thompson talks about family, and it not only shows another side to his writing, but also illuminates more subtle shades of his novels. The psychosis and violence of his novels was shocking then and continues to be today, but there is so much more to his writing than that. His ability to render character sketches in such dynamic, colorful tones and with such economy is remarkable, and makes me think of O. Henry.

Another favorite anecdote is about a writer that Thompson's uncle said was his favorite.


"Scoopchisel, the greatest writer of all time. … I was so impressed with the works of Scoopchisel that even after Pop and the rest of us had reassembled and I was well advanced in grammar school, I quoted him. Which inevitably led, of course, to my inditing a pained and accusing letter to my Uncle Bob. He replied promptly. He would not advise me - he wrote - to accuse my teachers of ignorance, nor would he confess that Scoopchisel had never existed. He would only say that every man had to believe in something and that he liked to believe in Scoopchisel, and even though the latter had never lived he damned well should have."

There are more great stories in this book than I can recount here (and to do so would be to spoil so many pleasures), but when you take a step back, several predominant themes become apparent. Family, migration, and money (or, frequently, the lack thereof), all of which lead to, what else, crime. The ups-and-downs of Thompson's father's career go from poor to rich and back again many times over, and include him being a lawman and then being run out of the state to him becoming a lawyer and a string of other jobs that had him running the gamut of success and failure. These stories are insightful illustrations of the successes and struggles of the American middle class in the first decades of the 1900s, from the latter days of westward expansion through the early days of the Great Depression. The careers of Thompson's father, and later himself, take the family all across the mid-west and through so many different occupations and social conditions. In this light, Bad Boy is more than just the personal story of Thompson, but a personalized story of a country undergoing drastic change.

And speaking of crime, many of the best passages of Bad Boy (and of its sequel, Roughneck) have to do with Thompson's time as a bellboy in a vice-ridden hotel. I could go into those, but then again, you could just read the book, and try to imagine yourself as a guest in a small, Midwestern hotel during prohibition, and seeing a teenage boy red-eyed from lack of sleeping, reeking slightly of whiskey, and slipping him a twenty and asking him if he could bring up a bottle of the good stuff. Yup, it's probably better that you do the reading and imagining for yourself. It's a hell of a lot more enjoyable that way.

Bad Boy is available from Mulholland Books.
at August 06, 2015