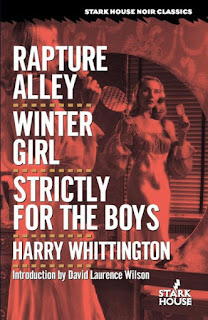 Stark House Press continues their revival of Harry Whittington with their third anthology of deep cuts from the "King of the Paperbacks." The nickname is well deserved. During the renaissance of the paperback originals in the 1950s and 1960s, Whittington was one of the hardest working pros, pumping out multiple titles a year. Ultimately, he published over 170 novels in his three-decade-long career. More than just prolific, he was one of the most reliably entertaining and distinctive paperback writers of his era. Whittington wasn't a flashy plotter: he shot from the hip, and when he hit the bull's-eye, it stuck. His were stories of intensely driven characters living out their unlucky lives as the world closed in on them. He might not have been as bold as Jim Thompson or as plaintive as David Goodis, but Whittington's novels, like the work of those two titans, were character-driven tragedies, at times more realistic and recognizable than those of his more lauded contemporaries. Like Day Keene and Orrie Hitt (both of whom Stark House has also reprinted), Whittington wrote of people you'd find across the street, down at the corner, or sitting next to you in the bar. He turned commonplace situations into frenzied odysseys of obsession and self-destruction. 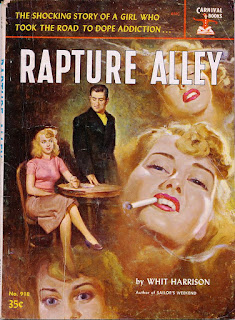 The three novels selected for this anthology have never been reprinted before, and two of them never even appeared under Whittington's own name. To long-time Whittington fans, this volume will provide a revelation of the depth and diversity of the author's talent, while newcomers will find plenty of reasons to dig deeper into the author's seemingly endless backlog.

Rapture Alley, originally published in 1953 under the pen name "Whit Harrison," charts an aspiring model's descent into heroin addiction: "It seemed that her life had become a bad dream, an endless nightmare in which everything continually worsened." Whittington's rendering of Lora's condition may be, at times, melodramatic, but he nails his portrait of the psychological strain and self-loathing that surround addiction. The doomed relationship-and the impossibility of a truly happy ending-are hallmarks of the author's worldview. 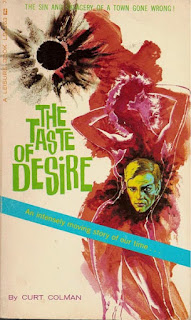 Winter Girl was originally released in 1963 as A Taste of Desire, under the "Curt Colman" byline, by the sleaze specialist Corinth, with numerous scenes added by hacks to spice up the text. Thanks to editor David Laurence Wilson, who restored the novel to Whittington's original version, we're finally able to see the book in its intended form, and it's a real treat. The final product is sort of a "boy and his dog" meets "backwoods tramp" mash-up set in the Deep South. Among its author's more unusual creations, it stands out for its sensitive yet unsettling coming-of-age narrative. The motivating crime - the search for the narrator's stolen prized pet - is nothing compared to the more pedestrian tragedies he faces on a daily basis: alcoholic fathers, abused mothers, rampant unsatisfied ambitions and desires, and the gradual realization that he's fated to become just like everyone else in his crummy, beaten-down town.

The real prize of the anthology, however, is Strictly For the Boys, originally published in 1959, and the only one of the three to bear Whittington's own name. The story is about a battered wife attempting to flee an abusive husband who refuses to let her, her mother, and her new boyfriend alone. Downright disturbing in its realism and sobering depiction of domestic violence, Strictly For the Boys displays a social consciousness that was prescient for its time, and which continues to be relevant today. 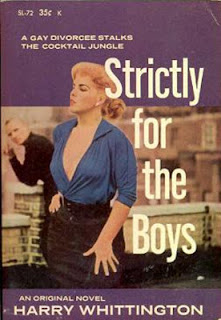 Editor and scholar David Laurence Wilson deserves special commendation for his tireless efforts to restore Whittington's reputation (and, in the case of Winter Girl, to restore the text itself). Wilson and Stark House publisher Greg Shepard give their books scholarly attention on par with the Library of America. Meticulously researched and lovingly edited, Stark House presents these forgotten paperback novels not as pulp curios, but as real literature, and set the bar high for other reprint series.
(Originally published January 23, 2012 at the Los Angeles Review of Books)

Posted by Cullen Gallagher at 11:04 AM