How could NoirCon 2012 get any better after Friday's panels and the awesome party at the Awards Ceremony? By having Wallace Stroby, Dennis Tafoya, Alison Gaylin, and Megan Abbott talk True Crime. Four of the best and smartest crime novelists out there today, gathered around a table, sharing their knowledge. They're all such good conversationalists and so well-read in their subject, it was a joy and an education to listen to them speak. 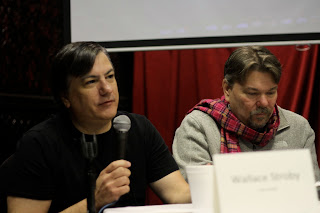 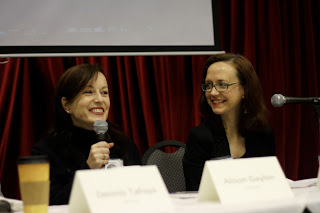 "True Crime pulls the lid off the world," Abbott said in her introduction. For True Crime Neophytes such as myself, the panelists were gracious enough to provide a True Crime Canon. I'll put the panelist's name in parentheses after the book. 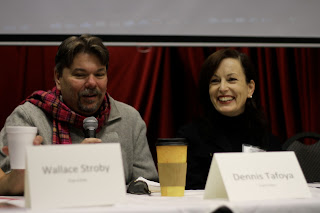 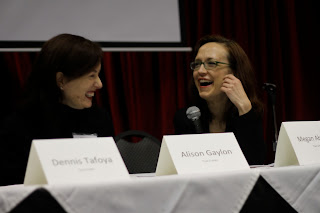 The Keynote Address was delivered by Pulitzer Prize-winning author Robert Olen Butler. His speech centered around the tools of narrative, and the shared language mechanics of literature and film. Comparing examples from Sam Peckinpah, Charles Dickens, Dashiell Hammett, The Bible (The Book of Judges), and The Matrix, Butler shows how the core concepts of slow-motion, establishing shots, visual movement, and montage are not just cinematic components, but the basic building blocks of storytelling. Butler concluded his address by expressing how "The intellectual electricity in this room is wonderful." He was dead-on. One of the things that makes NoirCon so wonderful is that it isn't just a writer's conference, or a gathering of fans, or a reading series, or an academic conference -- there's a little bit of each of those, but they add up to something much greater. Passion and community, as much as creativity and scholarship, form the crux of NoirCon. Its relatively small size (about 100 people), and welcoming and supportive atmosphere, mean that everyone gets to meet each other, and there's no pretensions to make anyone feel left out. It's a remarkably open atmosphere, and a great place to meet people and have genuine conversations. 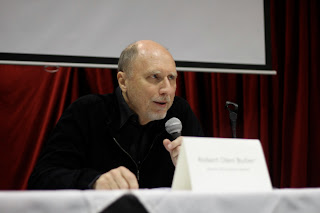 Next, Kenneth Wishnia, William Lashner, and Jay Gertzman took the stage to discuss Jewish Noir. Wishnia went all the way back to the Old Testament. Lashner read an excerpt from Kafka's The Metamorphosis and discussed how that book, along with The Trial, could be seen as the forerunners to Noir. Gertzman discussed religious and spiritual tropes in Goodis' fiction. 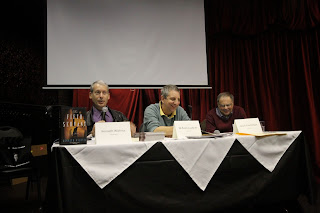 Before the next panel, Ed "Philly Poe Guy" Pettit and his world-class beard handed out some raffle prizes. Lulu Lollipop and Charles Benoit assisted. The money from the raffle will go to Project H.O.M.E., an organization that helps the homeless in Philadelphia. 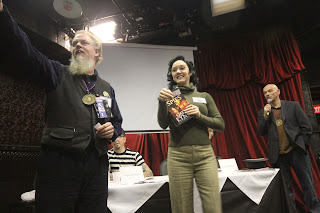 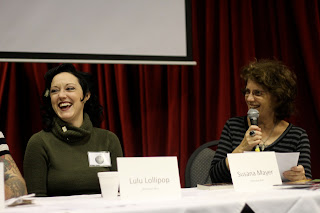 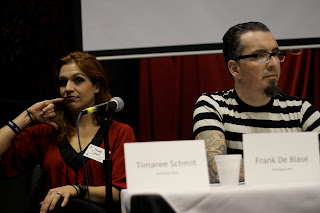 The panelists discussed the art, craft, and history of burlesque and its relationship to changing social and sexual mores in the US. It was a surprise to learn that in the 1930s, burlesque was more liberal and less conservative than in the 1940s and 1950s. The four panelists had a blast on stage with each other, riffing off each other's comments, weaving a provocative and enlightening discussion about sexual politics and history, and the artistic craft of burlesque. It's interesting to think about the history of pulp and paperback fiction in regards to their discussion, and the changing presentation of sexuality and the evolution of language and written images. Frank De Blase even read a passage from one of Richard Prather's Gold Medal novels. 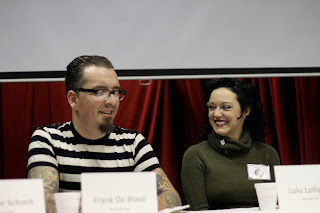 After the panel, Ed's duties as co-Master of Ceremonies compelled him to pose with two of the Burlesque panelists. All in the name of duty. 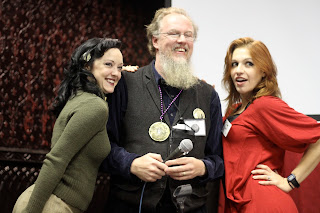 Concluding Saturday's panels was an event that soon become the stuff of legend and lore: a conversation between Duane Swierczynski and Lawrence Block. Not only are they both phenomenal novelists, but they're also damned funny. I've never heard so much laughter at NoirCon -- Block's droll delivery and Duane's improvisational quips are well known, but when combined the effect is simply awesome. They build off each other, instinctively setting up punch lines for the other to execute. Seriously, if they want to take this act on the road, I think Block and Swierczynski have a second career in comedy in the works. 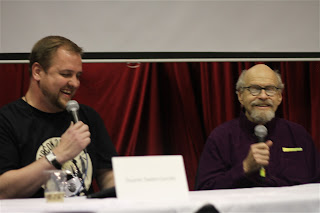 But the dynamic duo did more than just make us laugh -- they delivered an impressive and insightful interview about one of crime fiction's most distinguished careers. As Otto Penzler pointed out in the Q and A, what was so unique about the conversation is that the obvious subjects of Matthew Scudder and Bernie Rhodenbarr weren't mentioned at all. Instead, Duane grilled Block about his early days as a reader for Scott Meredith, his early books for Gold Medal, as well as his many sleaze novels under pseudonyms for Beacon, Nightstand, Midwood, and others. When I asked about the editorial processes for those paperback houses, Block told me that at Midwood and Nightstand there were almost no edits because they hired writers who didn't need it. At Beacon, however, the editor there was under the assumption that everything needed editing ... lots of editing. Even if it didn't. He had a team of editors whose job it was to edit and re-write and change things, often needlessly. Block recalled one novel where all of his compound sentences were split in two. The editors made the edits because, if they didn't, they would have been out of a job. 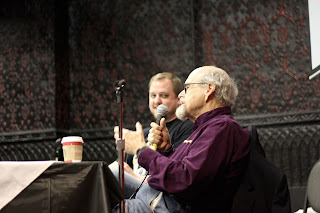 When asked by Otto Penzler to select his favorites among his own books, Block chose When the Sacred Gin Mill Closes and Small Town. During the Q&A, Wallace Stroby asked Block, "Can writing be taught?" Block responded, "I don't suppose so. What an instructor can do is create an environment in which a writer can teach himself." Good advice, indeed.

That brought Saturday to a close ... the panels, at least. That night, we gathered at the 10th floor bar of the Hilton Garden Inn and talked until Sunday morning came around. I went home a little after midnight because, at that time, I turn into a pumpkin. Pumpkins need rest. Plus, there were still two more panels on Sunday morning, and more raffle prizes!