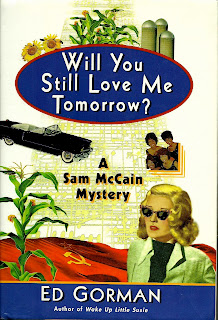 Will You Still Love Me Tomorrow? is the third of Ed Gorman’s Sam McCain mysteries. This one is set in 1959, and the Cold War has hit Black River Falls. Anti-Communist sympathies are high when a local professor, Richard Conners—already under fire for his leftist sympathies—turns up dead. McCain has his hands full as he tries to unravel this political conspiracy that has upended Black River Falls.

The titles of Ed Gorman’s Sam McCain books all come from song titles that were popular when the books were set. But they do more than just set the time and mood – there are important thematic elements that are specific to each story. Will You Still Love Me Tomorrow? captures the fleeting and impermanent sense of love, and the fear of abandonment and betrayal, felt by the characters in the book. They're so worried about winding up alone that the steps they take for physical comfort leave them at emotionally and psychologically estranged. They all make compromises, and as the McCain series progresses we see the characters start to realize the consequences of their decisions--sometimes it is just depression, sometimes infidelity, sometimes worse. Gorman’s books always have page-turning mystery plots, but it is the interpersonal relationships that always draw me in the most—especially in this book. There’s nothing idealistic about relationships in Gorman’s books—they’re as flawed, imperfect, and screwed up as the people involved. They’re also relatable as hell, too. 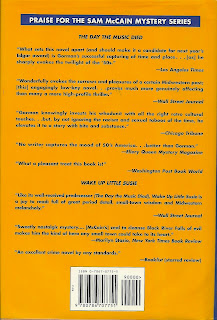 One of the things I like about Sam is his growing sense of self-awareness, especially when it comes to his relationships with Pamela Forrest (his long-time crush who is in love with a married man) and Mary Travers (the “nice girl” who loves him but whom he doesn’t love back). It’s incredibly revealing about his character that he can see exactly what is going on—and what is (and is not) going to happen—and still not change his ways. He knows the pain he is causing himself and Mary, but he won’t do “the right thing”—perhaps, because as this paragraph shows, there is no easy “right thing” to do.

“Aw, hell, I do feel sorry for him. You marry somebody and you have the right to expect them to love you to the same degree, or at least not to have anybody else in their heart. But she loves me and I love Pamela, though I love Mary too in some inexplicable way. It’s sexual—she really is a quietly sexual girl—but there’s something so fundamentally good about her that sometimes I can just stand there and watch her and feel this horny sorrow and respect lash me to her. Then I can’t keep my hands off her. Which is why I stay away. I’ve hurt her too much already. I don’t owe it to her to love her—anymore than Pamela owes it to me to love me—but I have an obligation not to deceive her.”


Overall, another strong entry in the Sam McCain series. Up next: Save The Last Dance For Me.