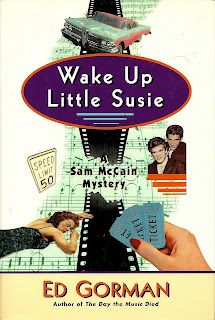 Wake Up Little Susie, the second of Ed Gorman’s Sam McCain books, has just been released as an eBook for Kindle. It is set in 1957, one year before the first book in the series, The Day the Music Died.

The novel opens with the unveiling of Ford’s latest creation, the Edsel. Susan Squires, the wife of District Attorney David Squires, is found dead in the trunk of one of the cars. The local chief of police, Cliffie, suspects the murderer is Mike Chalmers, whom the DA sent to prison many years ago. Of course, Judge Whitney asks Sam McCain to do some investigating of his own. Assisting Sam this time is Mary Travers, a close friend of Susan’s, and Sam’s should-be lover. Mary’s been in love with Sam since they were kids, but Sam has always been more in love with Pamela Forrest who, of course, is not in love with Sam. Working close together, Sam starts to wonder if maybe was wrong about Mary all these years. When Mary suddenly goes missing, however, Sam realizes there might be more to the case—and his feelings—than he realized.


Readers of Pulp Serenade know that I’m a big fan of Gorman’s novels, and his Sam McCain books are some of my favorites. Wake Up Susie has all the hallmarks of his best writing – a compelling mystery, great period detail, a tender but tragic romance, nice laughs, and keen social observations. The book also has several remarkable paragraphs I wanted to share.

“The sky was darker now, stains of mauve and gold and amber, a few thunderheads brilliantly outlined with the last of the day’s sunlight. There’s a loneliness to Saturday night, at least for me, that no amount of noise and movement can ever assuage. There’re a lot of popular songs about Saturday night, about how you live all week for it to roll around so you can go out and have yourself a ball. But deep down you know it’ll never be quite as exciting as you want it to be, need it to be, and the lonesomeness will never quite go away. I think my mom used to feel this when my dad was in Europe during the war. She’d kind of fix herself up on Saturday night and then sit in the living room by herself with her one highball in her hand and a Chesterfield in her fingers. Even when she’d laugh at the radio jokes there’d be a lonesomeness in her eyes that made me sad for her and scared for my dad. But we were lucky. Dad came home.” 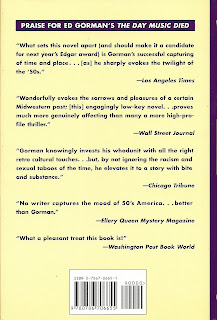 This first one is just downright beautiful writing. There’s a real sense of movement to the paragraph, and it could work as a stand-alone story, or even a prose poem. The image of the mother alone by the radio is a powerful one. Despite its simplicity, it evokes such deep feelings. And that last line – just three words, but man, they pack a punch. The words Gorman uses are just as important as the ones he does not, and there’s a lot being said in between the lines. Somehow, he seems to capture the experiences of a whole generation in just a few sentences.

This next paragraph starts out as an astute piece of criticism about John D. MacDonald, and ends up as a strong and insightful comment on the nature of literature and what it means to our own lives. And everything Gorman says about MacDonald’s writing I’d say goes for his own, as well. I’m not sure if that was Gorman’s intention or not, but he sums up exactly why I love reading his own books so much.

“There are no heroes in John D. novels, and that’s probably why I like them. Every once in a while his man will behave heroically, but that still doesn’t make him a hero. He has a lot of faults and he always realizes, at some point in every book, that he’s flawed and less than he wants to be. I think that’s why John D.’s books are so popular. Because we all know deep down we’re sort of jerks. Not all the time. But every once in a while we’re jerks and we have to face it and it’s never fun. You see how deeply you’ve hurt somebody, or how you were wrong about somebody, or how you let somebody down. But facing it makes you a better person. Because maybe next time you won’t be quite as petty or arrogant or cold. Good books are always moral, contrasting how we are with how we should be. And the good writer know how to do this without ever letting on.”


These last two passages capture Gorman’s uniquely sympathetic worldview that characterizes all of his novels. He’s a realist, seeing the best and worst in people, and like he said about John D. MacDonald, there are no easy heroes (or villains, for that matter).

“He was corrupt, violent, stupid, and yet he suffered. I’d seen him in the park holding her one day on his knee. I saw a tenderness and love I wish I hadn’t seen. Even bad guys have good sides. Sometimes that can get downright exasperating.”

“Good men don’t go around murdering people. But sometimes bad people are good people too. Or good people can do bad things. Life is like that sometimes.”