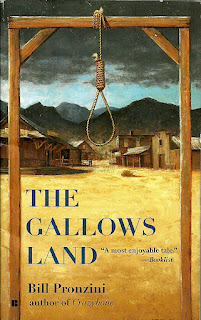 “I could understand now why my father had always called this kind of country ‘the gallows land’; unless you met it with strength and on its own terms, the way settlers like the ones below had to have done, it would kill you just as sure as a hangman’s rope.”

From the title alone you get a good sense of what Bill Pronzini’s The Gallows Land is going to be like. This is Western Noir par excellence. More than just hazardous landscapes and ruthless denizens, The Gallows Lands captures a haunting sense of desperation and desolation that is central to the genre. These characters are all trying to escape a past that, like a persistent ghost, refuses to abate.

The Gallows Land was originally published by Walker & Co. in 1983, and the copy I read was the 2001 Berkley paperback reprint.

Roy Boone brought his wife to the West start their life anew, and wound up leading her to her death. Not at the hands of Indians or scheming villains, but at their own. She worked herself to death—a weak heart and a persistent spirit lead her to an early grave because—and Roy blames himself. Selling everything he owns, he takes to the road—in search, once again, of a new beginning. Along the way, he meets Jennifer Todd, a battered wife who longs for an escape from her abusive husband. When Roy tries to intervene, he and Jennifer soon find themselves on the run from a mysterious posse that will stop at nothing to stop them from leaving. 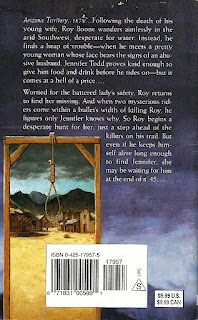 The Gallows Land strips the Western of romantic ideals and false advertising. Pronzini reminds what it means for the land to be harsh, for water to be scarce, for the soil to be stubborn—it means life or death, something overlooked in many Westerns. Pronzini also gives the Western landscape a psychological dimension that reminds me of Clifton Adams’ The Desperado and A Noose for the Desperado—the sense that, despite the size of the West, you can’t escape anything. There’s a caged panic to Roy and Jennifer’s flight in The Gallows Land. They can’t outrun the posse, they can’t outrun each other—and they certainly can’t outrun their past.

Pronzini isn’t just concerned with mythology, however. The central issue in The Gallows Land is domestic abuse. There’s a social and moral dimension to Pronzini’s West that anticipates Ed Gorman’s Guild books, as well as Edward A. Grainer’s Gideon Miles and Cash Laramie series. The violence suffered by Jennifer Todd is frighteningly real. Pronzini wants readers to forget about the romance of showdowns at noon or gun fights on the range and to concentrate on the basics of violence, of one hand striking someone’s face, of what those bruises signify, and terror of what is means for someone to not be able to escape.

For Pronzini, the West isn’t a mythical source of regeneration, it’s a place where our darkest elements are unmasked, and where the human threat is as naked and merciless as the landscape. If you like hard-hitting Westerns that mix action with melancholy, then pick up The Gallows Land.

Here are some of my favorite quotes from the book:

“Sleep came hard. To keep form fretting about Jennifer Todd and my brush with death, I tried to think about the future, about finding a new life somewhere, in California or in the Northwest; settling down again, on land that grew tall, green grass and shade trees instead of hardscrabble vegetation and poor graze; maybe even writing again—dime novels, or something better. But there was no comfort now in any of that. Trying to mold an image of the future was nigh impossible when the present was unsettled and the past filled me with such pain and yearning. Most of my dreams had already been shattered, and the ones that were left seemed empty and insubstantial. They held no more real promise than that powdery soil Emma and I had tried so long to farm.”


“The heroes never seem to have real feelings, do they? Or lives like the rest of us—families, problems, dreams?”


“Killing came easy to some, but not to me; each time I had been forced to kill a man during the war, a small portion of me had died, too, and it was the same this time. It made no difference that it had been done in self-defense. Life was too precious to me, especially now, after losing Emma, to take it from someone—even an outlaw—without a feeling of sadness and remorse.”