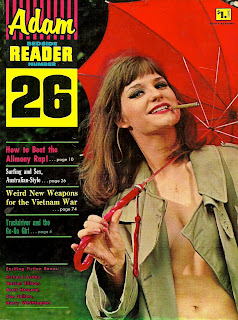 Harry Whittington short stories are hard to come by. So, when I saw one advertised in a magazine on eBay, I jumped at the opportunity. “Scream-Proof Paradise” was originally published in Adam Bedside Reader #26 (Dec. 1966).

The setting isn’t a typical one for Whittington. While he was a versatile writer, most of the books I’ve read of his centered around middle- and working-class characters. This story is set amongst the high and mighty of New York’s theatrical community, who have gathered at the grand New England home of director Cecil Hogan. The star of the party is Hogan’s latest writing discovery—a young man named Nick Jones. Jones has secretly been having an affair with the leading lady of the play, Talcie, who also happens to be Cecil’s wife. As the party winds down, Nick has to decide whether or not to go through with his plan to kill Cecil and make Talcie his forever.

Once the story kicks into gear, the style is pure Whittington. That tense mixture of gut-churning anxiety and driving neuroses that can propel a character make extreme decisions—often extremely bad ones. Here’s a short passage where his inimitable voice shines:


“Footsteps rattled behind a closed door. His heart pounded. He swore. If nerves were shot so that sudden sounds almost disemboweled him, he’d better abandon this action right now.

“He could enter Talcie’s bath, wash his hands, relieve the tension twisting his kidneys, return downstairs. No one would ever know what was burning his mind, driving him…and he and Talcie would be sentenced to go on sharing this heaven that opened upon hell.”


Whittington’s prose also has the occasional poetic flourish, such as the repeated phrase at the end of this line: “And then, with desperate irony. ‘Oh, yes – I’m lost, too. I’m lost, too.”

Though the title would indicate something a bit more lurid, the final product is on the tame side, considering the publication in which it appears. Overall, “Scream-Proof Paradise” is a very entertaining suspense story, albeit a tad conventional and predictable. But even with Whittington’s best novels you can sometimes predict the ruinous outcomes. The pleasure isn’t where the story ends, but how the characters wind up there, and the long, twisting, bleak roads they travel along the way.

Posted by Cullen Gallagher at 4:00 PM