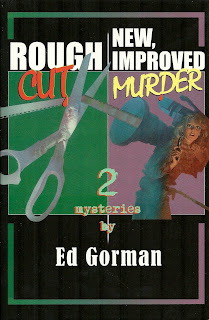 “There aren’t any heroes in this,” he said.

Looking back on Ed Gorman’s first novel, Rough Cut, originally published in 1985, it’s remarkable not only for how assured the writing is, but also because so many of the themes and motifs that would come to haunt his work are already evident. No heroes, just broken men who’ve broken the only home they knew, and who try and find compensation in their work. You can see shades of it in the tragic titular character in The Sharpshooter, in the troubled brothers on the police force in The Midnight Room, and especially in political consultant Dev Conrad in Sleeping Dogs and Stranglehold. The seed of all these characters is to be found here, in Rough Cut.

Advertising executive Michael Ketchum is the first of many jaded, world-weary, emotionally damaged protagonists that would come to populate Gorman’s fiction. He knows that his colleagues are opportunists, cheaters, and sometimes just plain assholes – but murder is something he didn’t expect. Office tensions are pushed to the max as bodies pile up and deceptions come to the surface, and Ketchum wonders if there will be anything left of his business to run – assuming he’s not next on the killer’s list.

A highly entertaining thriller, there’s something of the novel’s driving plot and unsentimental tone that reminds me of the best qualities of the first generation of paperback writers. Yet the book is anything but a throwback, and Gorman brings a lot of original ideas to the page. The poisonous advertising setting (inspired, no doubt, by Gorman’s own experiences in the field) is distinctive and ripe with bitterness, drama, and potential violence. 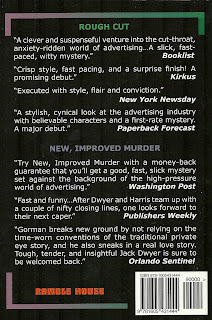 Among the most defining – and gratifying – characteristics is Gorman’s protagonist, Michael Ketchum, an average joe who unwittingly becomes an amateur detective, as many of Day Keene’s or Harry Whittington’s characters had to do decades earlier. But unlike his predecessors, Ketchum isn’t driven by his hard-on radar, or a need for self-preservation, but instead by a mature sense of responsibility. He doesn’t seem scared so much by death as by the all-too-real threat of losing his main advertising client, and having his business go under. There’s so much dead inside him already that if the business went, he’s not sure there’d be anything left of himself. I think he’s also aware that no matter how big a jerk his colleagues can be, they all need that paycheck at the end of the day – and as one of two heads of the company, Ketchum doesn’t want to let them down. At least that is how I read the office as a surrogate family.

Gorman’s prose is never lacking in empathy – it’s what gives his thrillers the overtones of tragedy, and it’s what gives the story an extra punch. Infidelity and duplicity are what gives so many of Ketchum’s colleagues hope to get through the day. I’m not sure whether Ketchum is better off seeing through the charade, or if his lack of illusions makes him all the more hopeless.

Strong plot, strong characters, strong writing – Rough Cut is one helluva debut novel, and the start to a wonderful career that only grows richer with each new book.

And here is an interview I did with Ed when The Midnight Room came out.

Some of my favorite quotes from the book:

“When you get that sense of isolation, that sense that you can confide in no one, then you’re easing open the door of madness and peering inside.”

“You reach a certain age, or state of mind, and what you find yourself doing is clinging–clinging to things that you once would have scoffed at as mediocre, things that are now embarrassingly important.”