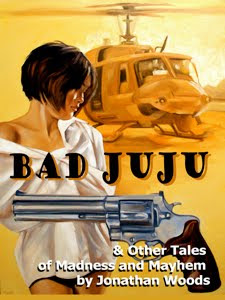 Jonathan Woods’ short story collection Bad Juju & Other Tales of Madness and Mayhem (New Pulp Press) was one of the wildest literary rides of 2010. Some of the stories reminded me of Bukowski writing a 70s Men’s Action Novel, others had the surreal fever of the Hell sequence at the end of Jim Thompson’s The Getaway – but these comparisons don’t do justice to the originality of Woods’ collection. They’re funny, sexy, thrilling, and all-around terrific stories.

Woods’ has that rare zing of spontaneity and impulsiveness that make a story seem to come alive on the page. Temptation lies around the corner for his characters, and more often than not they follow it to the end of the line. They do it for sex, money, a need for adventure, out of drunkenness, and occasionally just plain stupidity. Woods’ characters are a diverse lot, and they’re a fun, albeit sometimes dangerous, lot to be around. But isn’t that what you want from a story? Something to take you out of your everyday life for 10 minutes and give you a jolt, some charge of narrative electricity to wake you up from the quotidian humdrum nausea? Woods takes you around the world – Mexico, Venezuela and, heck, even Southern Vermont – and there’s plenty of exhilaration and peril to experience at every turn.

Take “Drive By” – for my money, one of the best stories in the collection – about a frat boy taken for a ride by a gorgeous, mysterious woman who encounters danger, sex, and excitement. This pulpy cocktail is at the heart of many of Bad Juju’s stories, and it’s irresistible. In the excellent story “Looking for Goa,” a criminal couple’s bond is put to the test as they hide out after a bank robbery. Woods mixes taut suspense with perceptive comments about human behavior and relationships, capping it all off with an effectively clever twist. My favorite of Woods’ endings is from “Dog Daze,” about a woman who tries to come between a man and his dog. Woods times the punchline just right, achieving a nice balance of ironic humor and an open-ended ambiguity that leaves you wondering where the characters will go next.

I had the pleasure of meeting Jonathan Woods at NoirCon 2010. Afterward, he was kind enough to answer some questions by email for Pulp Serenade. 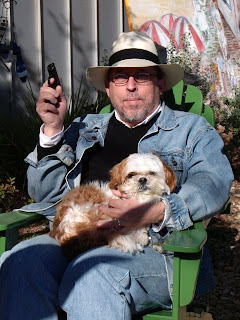 Pulp Serenade: How did this collection come together?

Jonathan Woods: The stories in Bad Juju were written over about 2½ years. The first was “Ideas of Murder in Southern Vermont.” I stole the title from Wallace Steven’s famous poem. After that story, I have no recollection which stories were written before or after which other stories. My friend the painter Bill Komodore was my first reader for most of them.

The organization of the stories in the published book was the result of consultations with the spirit world and some dreams I had. One of my favorite plays is called 52 Pickup by T.J. Dawe and Rita Bozi. The titles of 52 scenes from a relationship, from beginning to end, are written on a pack of playing cards, one scene per card. To begin the play one of the two actors throws the cards in the air. The two actors randomly pick up cards one at a time, acting out each scene of the relationship in the random order in which each card is retrieved. I think this same idea applies to the arrangement of the stories in Bad Juju. That being said, I like the order in which they appear in the book. And the last line of the last story ends the book perfectly.

PS: At what point did New Pulp Press get involved, and how did you link up with them?

JW: I met Jon Bassoff in May 2009 when we signed the agreement by which New Pulp Press agreed to publish Bad Juju. I went up to Denver to meet him in person, to make sure he didn’t look like Quasimodo. He favors black T-shirts, jeans and local Denver microbrews. A few weeks before that he’d read Bad Juju and loved it.

Jon’s company New Pulp Press is one of the really exciting new ventures in crime fiction publishing. Along with the crime fiction series published by PM Press and Europa. The best new writing is being published by small presses. Examples on the lit side include: Tinkers by Paul Harding, publisher: Bellevue Literary Press; Joshua Mohr’s Termite Parade published by Two Dollar Radio; and Lord of Misrule by Jaimy Gordon from McPherson & Company. That’s where it’s happening. And on the web. About half of the stories in Bad Juju were originally published in various webzines.

PS: Where do your stories typically begin -- with a character, a location, a title, or something else?

JW: They begin when I lower a bucket into the old id and draw it back up. “Maracaibo” – I just liked the name. It felt like one of those late 1940s adventure movies with William Bendix and some sexy broad set in the tropics. “An Orphan’s Tale” was inspired by two sentences in a Eudora Welty novella called “Moon Lake.”

JW: When I’m writing a story, it’s like I’m in a fever, working night and day until it’s done. There are gaps of varying length between each story. Writing a novel is different. You have to hack at it day in and day out like cutting your way through a jungle with a machete. I write exclusively on a computer. Some of my revisions I do by hand on printed pages. I like to write late at night. There’s something about that time, when you’re totally enclosed in stasis. The world cast into darkness.

PS: Are these stories based on your own travels at all?

JW: I have traveled to all the places I write about except Maracaibo. All the stories are strictly made up by yours truly, though “Incident in the Tropics” was extrapolated from a real life incident I witnessed in Panama.

PS: What character do you see yourself in most?

JW: I am all my characters. And they are me.

PS: You open the book with two terrific quotes. One is from Dashiell Hammett, "I haven't laughed so much over anything since the hogs ate my kid brother," and the other from Donald Barthelme, "Oh, there is nothing better than intelligent conversation except thrashing about in bed with a naked girl and Egmont Light Italic." How and why did you select these two particular quotes?

JW: The ingredients of my stories are sex, violence and humor. Sex and violence are around us every day, in the newspapers, on the late night TV news. The humor part is to keep me from putting a bullet through my brain. The two quotes kind of tie into that. The Hammett quote combines violence and humor. The Barthelme quote combines sex, humor and a certain wistfulness. The two quotes just seemed like a great way to introduce my stories.

PS: What other writers would you pick as major influences?

PS: Let's put you in the shoes of Earl Thigpen in "Drive By." A gorgeous, strange woman picks you up, buys you dinner, then gives you an AK-47 and asks you to kill her brother. Do you say yes?

JW: Anything can happen.

PS: A reoccurring motif in your collection is characters traveling abroad who wind up in trouble. Do you think these same characters would get in trouble if they just stayed home, or are they unconsciously seeking out trouble themselves?

JW: For me noir and tropical countries just seem to go together. But actually ten of the 19 stories in Bad Juju are set in the States. My characters would get into deep shit no matter where they are.

PS: There's a terrific line from your story "Maracaibo": "Bill watches her leggy departure, fascinated by the enigma of desire." This "enigma of desire" seems to be a central theme to many of your stories, could you say a few words about what it means to your characters?

JW: Love and lust are major plot points in my stories, as they are in life.
PS: Are there any plans to expand any of these stories into full-length novels?

JW: Not at the moment. I actually enjoy writing short stories more than novels. There’s an intense period of creation and then you have this object called a story that works like a multifaceted gemstone. I think short stories are one of the great contributions of America to literature. Think of all the great names of our short story writers: Poe, Bierce, Eudora Welty, Katherine Anne Porter, Raymond Carver, John Cheever, Paul Bowles.

PS: Bad Juju has taken you on the road recently -- we met at NoirCon in Philadelphia. Where did you travel to, and what were your experiences like with your first book?

JW: Since Bad Juju was published in April 2010, I’ve been traveling around quite a bit promoting the book. This has included a reading at the KGB Bar in NYC, Noir@theBar in St. Louis, BookPeople and the 2010 Texas Book Festival in Austin, Murder By the Book in Houston, Bouchercon and Noircon and a bunch of appearances in my hometown of Dallas. It’s been great fun. I’ve met tons of great people. And I love reading excerpts from the stories aloud. It adds a whole other dimension.

PS: What's up next for you? Any news or projects you can share?

JW: I’m working on some new stories. There’s a new one up on Plots with Guns called “Swingers Anonymous.” This year 2010 has been very much devoted to promoting Bad Juju. Hard work, and lots of fun.

Be sure to visit Jonathan Woods online at Southern Noir, and visit New Pulp Press to purchase Bad Juju & Other Tales of Madness and Mayhem.
at January 12, 2011