"East of A" by Russell Atwood 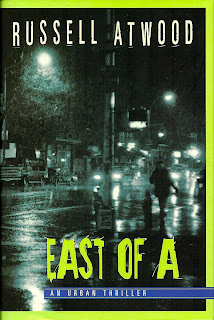 “East of A” was originally a short story in the July 1997 issue of Ellery Queen Mystery Magazine. That was when Russell Atwood first introduced his series Private Detective Payton Sherwood to readers. The story was about a missing teenager from New Hampshire who followed a musician to New York City and never made it back home. Payton thinks it might be tied into a recent purse snatching and murder, so he takes to the streets of New York City’s famed East Village and Alphabet City, which Atwood vividly captures from intimate, first-hand experience. It’s the author’s stamping ground, and his geographical know-how gives a unique flavor to the story. There are a couple of convenient coincidences in the plot, and Payton hasn’t fully come of age as a character yet, but Atwood makes up for this with a sobering twist at the end. More than anything, however, it is that local authenticity that stands out in the story.

Two years later, Ballantine published Atwood’s full-length novel East of A. Same title, same neighborhood, same Private Detective, but Atwood takes things to another level. The writing is rich and confident, the plotting intricate but precise, and the characters as lively and vivid as their East Side surroundings. Atwood bends the Private Eye genre without breaking it, and his story is absorbing and original. 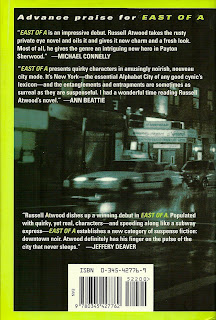 This time around, Sherwood comes across a teenage girl named Gloria being attacked on the streets. When he steps in, he gets beaten up and she gets away. Before she flees, she steals his gold Rolex. At first he just wants his watch back, but soon he uncovers a mystery that he can’t let go of. Word on the street is that she stole a lot of drugs and that the dealers are looking for her – but they can’t find her, and neither can Payton Sherwood. Soon some of the local residents of Alphabet City are turning up dead, and Payton wonders how much longer before someone else finds the girl first?

In the novel East of A, Payton Sherwood emerges as a mature character, a modern incarnation of the Private Detective that pays homage to the classic archetypes but doesn’t blindly repeat them. His apartment is messy, he’s not exactly a gourmand (often eating cheese and crackers), and he doesn’t have the token secretary like so many PIs of yesteryear. Like many of the residents of Alphabet City and the East Village (including the girl he is looking for), Payton Sherwood is a little lost himself. Perhaps that’s why he ignores the job offers from his former employer, Metro Securities, in order to pursue an empty dream of finding this girl. There’s no light at the end of this tunnel, no reward waiting for him, no prize girl to put her arms around him. Payton’s not the white knight that Marlowe was, nor is he the vigilante that Mike Hammer was, or even the seeker of booze-and-broads like Bill Crane. Payton’s interest in Gloria goes much deeper – deeper than perhaps he even realizes – and reveals the detective’s own uncertainty and indirection in life. 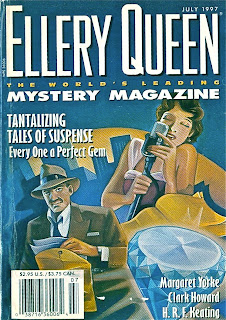 Even more than the original short story, here Atwood proves that he can write New York with the best of them. Reading East of A takes me right back to my first visits to the East Village and Alphabet city, right around the same time the book was published. Since that time, St. Marks Place and the surrounding streets have changed greatly. East of A is like a time capsule, perfectly capturing the neighborhood the way it might never be again. If you never visited during that time, read the book and you’ll know the sights and smells like you were there just yesterday. Atwood’s prose is also both colorful and inventive – a favorite turn of phrase is when he describes a fight by saying “It went on like that for five pages.” It cleverly conveys the lengthy, arduous encounter without belaboring it for five pages.

East of A is now out of print, though it is available as an eBook. The short story is also available for eReaders, or as a free PDF from the author’s website. Atwood’s follow-up, Losers Live Longer, also features Payton Sherwood and was published by Hard Case Crime in 2009.

Some of my favorite quotes:

“From that distance, the city stays the city of your imagination: a scintillating island of promises, of hope, of love renewed. Not until you get closer is the sobering truth revealed: you’re happier to see her than she is to see you. Not angry, not resentful. Worse. Uninterested, dispassionate, preoccupied; her reticence inspires myth.”

“We’re all in the gutter, I thought, but some of us are looking at the swollen cigarette ends, wadded pizza-parlor napkins, and a discarded, toothless comb.”

“We’ve got these voids, empty spaces,” he said, “some of us – maybe all of us – inside us. You got to fill it with something. People try smoke, alcohol, God, violence…You smoke, right? So maybe you can understand a little. There’s a poem goes, ‘Water is taught by thirst.’ So true.”
at January 11, 2011