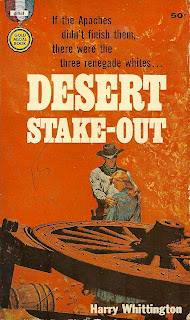 Harry Whittington writes first pages like time bombs. Once the clock starts, there’s no stopping until it is all over. He hurls you headfirst into the story, tossing you in with a cast of severe characters already on their last leg even before the eleventh hour has begun. And when that inevitable moment comes, you can bet your bottom dollar you’ll see their most unsavory sides. Especially in his Westerns, as grimy and sweaty as they come, the sun bakes the humanity out of Whittington’s characters: out there in the barren landscape, there’s not much they can hide, even from themselves. Which is why Whittington’s characters are probably so tormented.

Desert Stake-Out, published in 1961, is as tough, lean, and gritty as any of his other Gold Medal Crime novels. Blade Merrick, a freelance driver for the military, is traveling through Apache territory to deliver medicine. Along the way, he rescues a group of people from the Apaches, and they seek shelter at the Patchee Wells water hole, the only salvation in the Arizona badlands. However, things don’t go as planned. Blade’s new companions threaten to kill him if he doesn’t turn around and forget about delivering the medicine. But Blade has his own ulterior motives, and he’s not so easily deterred. 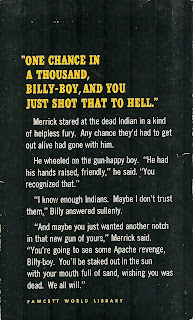 A cinematically paced novel, once the story begins, Whittington doesn’t leave his characters, not for a second. No narrative ellipses, no digressions, tangents or flashbacks. If you read the book cover to cover, you can really appreciate Whittington’s streamlined plotting. Desert Stake-Out doesn’t just flow, it's torrential.

More than just succinct, Whittington’s writing is as nuanced as it is terse. His characters are always well-rounded and compelling, and they aren’t your average sagebrush clichés, either. Psychological complexity was one of Whittington’s strengths. With ample emotional and physical scars weighing down on him, Blade rises above the archetype of the honorable drifter. And despite his dark impulses, he actually turns out to be one of Whittington’s more admirable characters, which is a nice surprise considering the author’s penchant for amoral protagonists.

Desert Stake-Out stands out amidst Whittington’s already outstanding body of work as one of his best.

As always, a few excerpts from the book:

“He wanted to get drunk; she was a poison in his bloodstream and he had to drink her out.”

“Somewhere in the dark there was a lonely cry, and no matter how long you’d been out here, sometimes it was hard to convince yourself it was the crying of the wind.”

“Perch struck against the wall, flat, and the sound was like a goatskin tight with water dropped on stones.”
at December 08, 2010