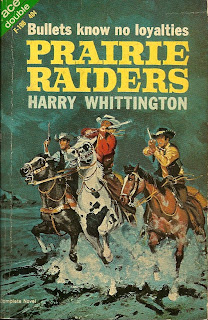 One of the hallmarks of a Harry Whittington book is a protagonist driven by an all-consuming obsession, a mission that rises above morality, a cause that is more important that their lives. It is characteristic of both his Crime novels as well as his Westerns. In To Find Cora, Joe Byars hunts for his missing wife and eventually finds her in the clutches of another man as fanatical and as himself. In Shadow at Noon, Jeff Clane wasn’t supposed to survive the set-up duel, but he did, and found himself in more trouble than ever—only his thirst for vengeance keeps him going. And men, money and murder can’t satiate Bernice Hopper’s desire for happiness in Fires that Destroy, a title that is the perfect metaphor for many of Whittington’s characters and their desperate pursuits.

Clay Webb belongs to this same lineage of tormented, relentless protagonists. Prairie Raiders was originally published in 1963 as an Ace Double (along with Drygulch Town). The story is about a Marshall who was ready to hang up his gun belt for good and settle down with Mary Amerson. But on their wedding day—which was also his retirement day—one of the men Webb put behind bars, Les Patton, showed up looking to take back those five years he lost. Patton challenged Webb to a duel, but it wasn’t Webb who took the fatal bullet but Mary.

With all his dreams of serenity shattered, Clay Webb picks up his guns once more and takes to the range in search of revenge, in search of Les Patton. Along the way he is mistaken for a cattle rustler and captured by the rancher Shaffner and his possee who are on a hunt of their own. Mel Terrell, a member of the posse, wants to hang Webb. In order to save his own neck, Webb will have to prove to Shaffner and Terrell that he is innocent, and help find the real rustlers, all the while Les Patton’s trail grows colder and more distant everyday.

A lean 103 pages, Prairie Raiders bolts along with the same force and intensity as Clay Webb. Whittington’s prose is fast and hard, the Western action stirring, and with a strong sense of psychology and character (two of the author’s strongest suits). There’s not a moment or a word wasted in this book. Chalk up another winner to the prolific writing machine that was Harry Whittington.

Here are two of my favorite paragraphs from the book that best capture Whittington’s style:

“He couldn’t talk about the pain and agony that sent him riding with a badly-healed bullet wound in him looking for a man named Les Patton, but inside it was bright-clear like the blaze of the noon sun, burning out his guts, drying his lips, killing him with thirst. Thirst for something that was dead—dead and forever gone, and nothing could bring it back on earth.

“A few months ago he’d been a lawdog, and people respected him, and some men feared him. But inside he was troubled by something he could not put in words. A lawman had to believe he was right, had to believe in his right to make quick judgments, quick draws, and mete out quick death. And he had lost this belief…”

-Harry Whittington on Words and Writing