"The Chill" by Jason Starr and Mick Bertilorenzi (Vertigo Crime, 2010) 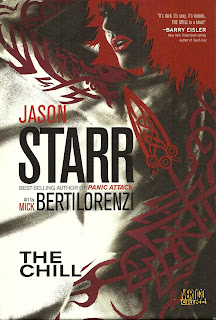 2010 is off to a great start for Jason Starr, who just came off a very successful 2009 with the one-two punch of Fake I.D. in May and Panic Attack in August (review coming soon), as well as news that Bret Easton Ellis was adapting The Follower into a series for HBO and Lionsgate TV. Part of DC Comics’ Vertigo Crime line of graphic novels, The Chill pairs Starr with artist Mick Bertilorenzi, a union of perfectly matched styles. Starr’s sensibility—edgy, hardboiled, darkly funny—finds visual expression through Bertilorenzi’s artwork, as equally adept at capturing action-packed violence as it is subtler, pensive moments that bring characters’ inner tensions to the surface with their furrowed brows and clenched teeth. The latent horror always present in Starr’s work is much more pronounced in The Chill, and it naturally complements his usual interests in psychology, sexual mores, social satire, and the rich and varied landscape of New York City.

Before we get to the city, however, Starr takes us first to County Clare, Ireland. It’s the summer of 1967, and two young lovers—Martin and Arlana—are out for a stroll in the countryside. As they lay down and begin to embrace each other, something unexpected happens—an intense chill overtakes Martin, who is completely frozen. It’s a hell of a way for Arlana to realize that her family heritage isn’t quite so normal. 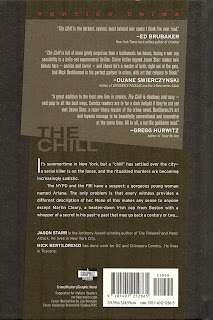 Cut to present day New York City. The dismembered, frozen bodies of young men are turning up all across the city. The police are baffled not only by the bizarre, brutal crimes, but also the lack of evidence: plenty of people saw the victims going off with a strange woman prior to their deaths, but no two witnesses can agree on what they saw. But then a mysterious rogue cop from Boston shows up who knows a thing or two about Irish mythology and “The Chill,” and it’s up to him to put a stop to an age-old, flesh-hungry curse.

Back-alley passions, decapitation, unholy demons, sleazy bars, and a citywide dragnet, plus more spears, sex and psychopaths than should be collected between two covers (but thankfully are). Bertilorenzi’s images drip with blood (even the shadows seem gory they are so dense), and Starr’s dialogue is as sharp and funny as ever. That, in a nutshell, is The Chill. And what a wonderfully demented nutshell it is. Fans of Starr’s work won’t want to miss this one.
at January 21, 2010