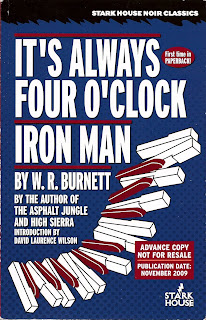 What does it mean to praise an author and his or her work? To assign my own words to describe those of another? I could easily label W.R. Burnett as a “great” writer, or call either of his two novels in the new Stark House Press collection – It’s Always Four O’Clock and Iron Man – “great” works, but somehow that label feels inappropriate considering Burnett’s condemnation of the word in It’s Always Four O’Clock.

“Words, words, words! And I’m stuck for some to use. Words are like painted marbles, they get all the stuff rubbed off of them. Take ‘great.’ What does it mean? It means ‘great,’ you donkeyhead, you yell back at me. All right. So now we got ‘great’ movie actors, and ‘great’ automobiles, and ‘great’ refrigerators and even ‘great’ lipsticks. So what are you going to call George Washington? Do you dig me now?”

Not wanting to be guilty of comparing him to a kitchen appliance, I’ll have to find another way of praising him. He’s graceful or fierce in all the right places, merciless or full of aching sympathy depending on what the moment calls for, and never there’s a word out of place. Burnett manages to be as unconventionally elegant as Royal, the pianist/composer in It’s Always Four O’Clock that defies the borders of jazz and classical, and as direct and no-nonsense as one of Coke Mason’s knockout swings in Iron Man.

The most fitting epithet, however, comes from David Laurence Wilson, who referred to Burnett as “a mercenary with a pen” in his introductory essay, “W.R. Burnett: A Versatile Hardboiled Master.” Interweaving personal remembrances of Burnett (whom he was fortunate enough to know) with keen critical and biographical insight, Wilson evokes not only the intensity with which Burnett uses words, but also his ruthless precision. These two novels are unmistakably the work of the same creator, yet they are so distinct in their styles, so utterly different in their approaches. It’s Always Four O’Clock, with its casual, first-person narrator, seems to take on the freewheeling sensibility of a jam session, while Iron Man’s sparse, removed prose can seem as cold as Coke Mason’s sweat before the big match. What unifies them, then, is the pitch-perfect harmony between the story and the language used by Burnett to tell it. 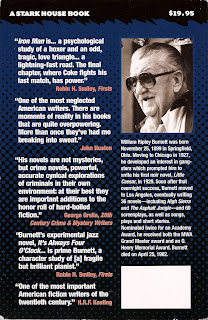 Originally published in 1956 and finally making its paperback debut, It’s Always Four O’Clock isn’t your typical rise and fall story, partially because the rise is so short lived, but mostly because its fall is filled with the tragic, all-too-human ironies that only an unfortunate survivor can detachedly laugh at on the surface while silently cursing on the inside. Stan Pawley is a jazz guitarist without much ambition, and while he likes the guys he plays with, he knows it’s not real music, that a lot of them are just going through the motions. Then one night in a bar he befriends Royal Mauch, an aloof and eccentric pianist, and together they form a band that pushes all the boundaries their contemporaries refuse to push. Burnett clearly sympathizes with each of the members of the group, all of whom are caught between art and commercialism – between destroying yourself over your work and compromising your work in order to make that paycheck. Self-destructive drive, ambivalence, and opportunism each contribute to the group’s collective downfall, but to Burnett’s credit he doesn’t create easy martyrs or victims, just characters with no easy out.

Whereas It’s Always Four O’Clock is filtered through Stan’s guilt, regret, and pathos, Iron Man (originally published in 1930) betrays no emotion. Told in strictly detached and impersonal third-person, the story unfolds almost entirely through dialogue and objective action. Reading this story of middle-weight boxer Coke Mason, who like Royal Mauch rises through the ranks to mythological heights from which he can’t help but fall, it is no wonder that Hollywood would soon be calling: the emphasis on external action over internal thoughts is made for the movies. The lack of intimacy with the characters also foreshadows the major betrayals and breakups that befall Coke Mason as his career grows: Burnett hides subjectivity in order to emphasize superficiality. In the book’s final pages, when Coke finds himself alone and surrounded by status-centric bloodsuckers, Burnett burrows deep into his character, revealing to us mountains of pain and emotion that even Coke didn’t realize he contained before. Such stylistic orchestration succeeds in making an even greater impact on the reader: when Coke takes those final punches (both literal and figurative), they hurt like nothing else that has come before.

Another way of linking the books that also brings in some of Burnett’s famous works (such as Little Caesar) is that these are quintessential books about America, particularly the conflict of idealism and the way things really work behind closed doors, where corruption and disillusionment run rampant. The Land of Opportunity can sometimes be deceiving: success and wealth may seem they are for the taking, but taking isn’t always the way to achieve them (at least not for very long). “Sometimes it is good to remember even the inconvenient aspects of American culture,” reminds David Laurence Wilson. And he’s right – look at these two books by Burnett, and you’ll see a diverse cross-section of life (in terms of race, class, gender, and politics). More than just portraits of a nation, they are also invaluable commentaries on society and culture at the time.

“I felt as out of place as a blind man at a burlesque show.”

“Did you ever walk into a wide-awake, enthusiastic, sober gathering of friends when you were drunk, tired, disgusted, sleepy and ready to knock your head against the wall? Then you know what I mean.”

“Funny!” he thought. “When I didn’t have Rose I figured if I could find her, I’d never be lonesome no more. Funny! Yeah, and when I was a kid I thought if I could ever be champion I’d be the happiest guy on earth. Funny, how things are!”
at October 21, 2009