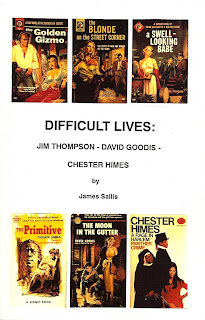 With its mind in the gutter and feet firmly rooted even farther below that, deep down in the dark recesses of the human experience and the dusty corners of bookstores, James Sallis’ Difficult Lives: Jim Thompson, David Goodis, Chester Himes (Gryphon Books, 1993/2000) stands right alongside Geoffrey O’Brien’s Hardboiled America as an essential text on crime fiction in the early days of the paperback original. While it does devote three chapters to those individual authors, Sallis’ introduction and first chapter, “Portable Worlds: The Original Paperback Novel,” succinctly and evocatively capture the pulp zeitgeist: “Tawdry–with just a hint of transcendence.”

The crux of the Sallis’ book is that the ephemeral nature of the paperback original – cheap, disposable, degenerate – both allowed for this trio to publish such experimental novels, at once intensely personal yet (sometimes unintentionally) reflective of the world around them, and subsequently for their work to be forgotten. “Once read,” Sallis writes, “like beer cans they were tossed away.” But being on the margin of the publishing industry allowed them certain liberties that major publishers would never have: Thompson’s experimental narratives and soociopathic protagonists; Goodis’ bleak worldview that veers away from plot and into irreconcilable broods; Himes’ hyper-kinetic, confrontational absurdities that reflected America’s racial prejudices and tensions. These weren’t safe, easy, or pleasant topics, yet they were crucial and relevant in ways that even the writers’ might not have suspected at the time. Roughly half a century later, their books say a hell of a lot more about what it meant to be alive at that point in time than any history book: to be scared, outraged, uncertain, submissive, and rebellious. 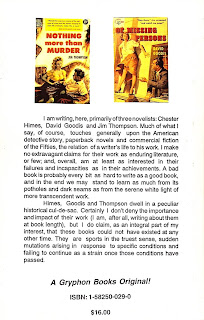 Thompson, Goodis, and Himes, each in their own way, chronicle peoples like themselves: fringe characters treading the line of social respectability and doing a bad job at it. Some try harder; some give up; others lash out. All are punished. These aren’t flattering portraits of America, but nor are they flattering characters, either. They were repackaging the worst parts of ourselves and selling it back to us for two bits: uncontrollable impulses, alcoholic depression, riotous race relations. I’d really love to know what some traveling salesman thought as he flipped through A Hell of a Woman, The Burglar, or The Real Cool Killers while sitting at a drugstore counter.

Clocking in at a brief 100 pages, it’s a quick and revealing read, and like the authors he writes about, Sallis can pack a big punch in a short sentence. (Though I do wish his chapter on Goodis were longer; he does a marvelous job detailing Goodis’ first few novels and early life, but cuts the story short around the time of Cassidy’s Girl without really touching on later works such as The Burglar and Somebody’s Done For, which I would argue are among his most fully realized and least compromising works.) References to such diverse authors as D.H. Lawrence (“Men murdered themselves into this democracy,”) and Anton Artaud (“Very little is needed to destroy a man, he needs only the conviction that his work is useless,”) elucidate some of the nuances to these writers work, but also make the case for their cultural and literary value. Sallis doesn’t seem to want to wrest them from the pulps to put on any high shelf; in fact, if anything, he sees the original context of their works as indispensable to understanding their importance. More than anything, I think that Sallis wants their work to be read and to stay in print. Difficult Lives was originally published in 1993, and sixteen years later, most of their work is still available and growing in popularity. Let’s hope it continues to do so.

Some favorite passages from Difficult Lives:

“What we have here, then, are failures to communicate. Three writers who like Icarus almost flew, but fell into a sea of original paperback novels. Three highly individual voices almost lost in the babble and hubbub of the marketplace. Three men who tried in their work to subvert again an already subversive genre and simultaneously to retrieve their lives, make some sense of them, through tricks of metaphor.”

On Thompson:
“One thinks of those cartoon beasts who, going about their destined business, pause to look down and only then discover that the ground beneath their feet – for how long? – no longer exists. But in Thompson’s work there is no restoration: in the following frame the coyote remains scorched and smoldering, stripped of hide and hair, foreshortened, legless, transformed.”

On Goodis:
“In fact, the craftsmanship he mastered in all those years of turning out fiction for the pulps was sometimes all that salvaged his books from a morass of aberrant psychology and obsession.”

On Himes:
“[He] has held a mirror to this country, hoping the monster would see itself and feel shame, know what it was. But the monster breaks all mirrors that show true, and its madness finally drives the man from it. He stands far way, on a cliff perhaps, looking down as the monster breaks its baubles one by one, stuffs itself, fouls its nest, steps in its anger and hatred. Until one day the monster has nothing left, nothing, and desperately it turns its eyes to that cliff. But the man is gone.”