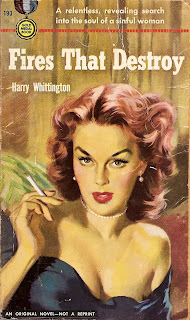 When we think of the heyday of pulp fiction, we think of short but powerful novels, pared down to the bare necessities. No wasted words, nothing extraneous to slow down the fevered pace of the novel that increases with each page turn. Unrelenting characters in a merciless world where darkness reigns even during the day. Workhorse writers pounding the keys 10, 12 hours a day, tirelessly churning out book after book, story after story. Basically, we’re thinking of Harry Whittington, whose tightly coiled tales of doomed desire were amongst the most concise, elegant, and tense of his time. As Ed Gorman wrote, “Back in the 1950s you could run but you couldn’t hide from Harry Whittington.”

A fitting subtitle for Fires that Destroy would be “Sympathy for the Femme Fatale.” Even though it was originally published by Gold Medal in 1951, Harry Whittington’s novel still feels fresh and modern in many ways, particularly because he doesn’t follow the standard operating procedure, and approaches one of the most foundational noir archetypes from a new angle. Instead of telling the story of a man who hires a secretary who robs and kills him, Whittington inverts the equation and examines the story from her point of view. He poses the question, “Who really is the victim here?” and in the process humanizes the femme fatale to the point that such a label hardly seems appropriate. 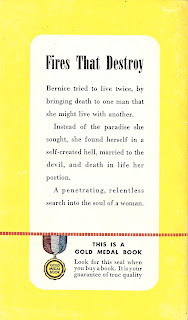 Bernice Harper knows how to survive. Resourceful and intelligent, she’s struggled her whole life: against illness and poverty, against a society that deemed her unattractive, and against bosses that pass her over for her more voluptuous co-workers. She knows how the world works, and she’s gotten so low that she’s willing to play by its nasty, amoral rules. While working as a private secretary to a blind businessman, she discovers a cache of $24,000 hidden away inside of a hollowed-out book. Knowing his tendency to drink, she develops a plan to get him good and soused, push him down the stairs, and get away with the money.

And get away with it she does. But the $24,000 doesn’t buy her the life she wants. Sure, she can get freedom, nice clothes, pretty makeup, and even a swell-looking bank teller named Carlos that puts movie stars to shame. When the two of them hop down to Florida to elope, they both carry their ghosts with them. Bernice is haunted by nightmares of her crime, while Carlos is being hounded by debt collectors that want their money. Alienating the unhappy couple even more is Carlos’ inability to satisfy Bernice’s sexual longings, and Bernice’s growing desperation when she finds she can’t control either his carousing or gambling addictions. 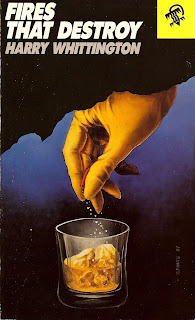 Who can blame her for what she does? Certainly not Whittington, whose uncanny ability to convey the psychological anguish of his characters has rarely been more affecting. Whereas some of Whittington’s other novels – like A Ticket to Hell, You’ll Die Next, and Mourn the Hangman – followed innocent protagonists who must descend into the netherworld in order to restore (relative) normalcy to their lives, here Whittington takes us on a very different journey. We follow Bernice’s every action and thought so as to be complicit in not only her guilt, but also her pleasure and reward. Whittington arouses a very discomforting sympathy towards Bernice, the sort that one might expect from one of Jim Thompson’s novels like Pop. 1280, the important difference being that Thompson puts us in the mind of sociopaths, whereas Whittington’s criminal is a normal person like you or me.

Fires That Destroy is a suitably poetic title not only for a novel about a character who is slowly consumed by dissatisfaction and insatiability, but also for noir fiction en masse. The pressures driving Bernice aren’t extraordinary or hard to comprehend – they’re the same anxieties and difficulties that most of us face throughout our lives. Work, money, loneliness – these things fester and grow, mutating until they take control of our thoughts and actions. Until they destroy our hopes and dreams, our futures. Depression is a handy word to describe this process. It’s our struggle to not let this baggage get the best of it. What noir literature at its best allows us to do is to go to a place where the darkness can safely overtake us temporarily. But after 150 pages or so, we are able to return to our lives, disturbed by what we’ve experienced, relieved to be back in our own lives that we wanted to escape from. The irony, of course, is that we never escaped at all – that while reading we never lost sight of ourselves and our own lives. 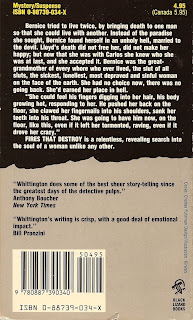 “A leper doesn’t welcome another leper in the world of the well.”

“He had lost his glasses in the fall. His empty, sightless eyes, white as slugs, were fixed on her at a crazy angle, because his head was twisted over his left shoulder.”

“Her daughter, Francie, was a lovely brunette girl. She appeared slightly startled at the facts of life – or perhaps it was the way she plucked her eyebrows.”

“She spread her fingers wide and taut, closing the over Carlos’ like a vise. That was the way she wanted to hold him.”

“Oh, she’d got away with murder, and she had Lloyd’s hidden money. But she had walked into hell: the hell of frustration. The kind of frustration that drove you insane. You knew what you wanted, you had it right with you, but it was rotten in the middle. It was no good. It was desire and excitement and sweet agony and it was always frustrated.”