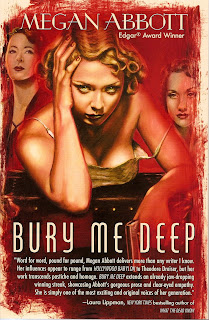 “Says you brought him ruin and hellfire and yet he loves you still.”

Marion, sprung back to vivid life, looked up fast and wanted to laugh. “Brought him to ruin. Oh, isn’t that a fairy tale, a dreamy little love book to end all.”

In Bury Me Deep (Simon & Schuster, 2009), her fourth novel, Megan Abbott buries one of the longstanding mythologies of noir literature: it’s all the fault of the femme fatale. Exhuming the spirits of so many fallen women condemned by male protagonists who felt threatened and persecuted, Abbott turns the tables and tells the story from another perspective. Instead of the woman who enters the man’s life and brings him to ruin, what if the story were told from her perspective? What happens if you hold a mirror up to the quintessence of noir? What will the reflection reveal?

Abbott’s answer is that the mirror only gets darker – much, much darker. Written as though in a rhapsodic fever, Bury Me Deep is her most absorbing and affecting novel yet. Her characters are a doomed and tragic lot on an irreversible decline to despair, and no one is further down the path than Marion Seeley. Her husband is an ex-junkie doctor who has lost his medical license and left her alone in a new city to fend for herself while he takes a job in Mexico and tries to get clean. Working as in a medical clinic, Marion is taken under the wing of Louise Mercer, a nurse who knows all the ins and outs of not only the clinic – but also the city, and its many secrets. Naïve at first, Marion slowly allows Louise and her companion Ginny to introduce her to the seedier side of life, and gradually she becomes consumed by myriad forms of pleasure and vice. And then she is introduced to Joe Lanigan, and everything changes.

You are Pandora, Joe Lanigan had said. You came to town with that beautiful little box I had to, had to open.

Their affair devours Marion’s life, threatening her job as well as her relationship to Louise and Ginny. Passion turns to jealousy and uncontrollable rage, and soon Marion finds herself on the run to Los Angeles to dispose of the bodies, and all the while only one thought clouds her mind: getting Joe back, no matter what it takes. 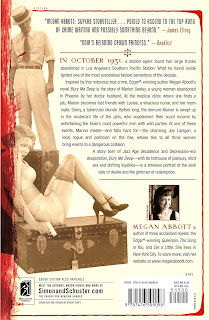 Based off the real-life case of “Trunk Murderess” Winnie Ruth Judd, a notorious Depression-era headliner, Abbott uses fiction to investigate the untold stories and motivations that never came out during the trial, or which remained hidden behind closed doors and cold, dead lips. What were the forces acting upon her – environmental pressures? broken promises from manipulative men? social taboos that prejudiced the city against her? – that influenced her actions and decisions, and buried her so deep in desperation that there was no way out except to go deeper, always deeper.

While Marion may be the central protagonist of the novel, arguably the most indelibly haunting portrait is that of Louise and Ginny. Unlike Marion, these two stick to their debauched lifestyle not because any emotional need or uncontrollable desire, but because of their financial plight. Their “favors” to the men around town are rewarded with radios, medicine, food, and various items they couldn’t otherwise afford – some are luxuries, others are essentials. Theirs, too, is a strong bond based on caring – at times they seem like lovers, at others like sisters, and still at others like a mother and child. Having seen the worst aspects of humanity, they survived and came out on top, only to go back down those depraved alleys whenever necessary. They emerged not always unscathed, not always uncorrupted, but aware of the way the world works. Marion, on the other hand, is unable to cope with this sordid knowledge, which eats at her conscience like a pestilence until she’s left sinking alone in an ungrounded, immoral universe with nothing to hold on to.

Complementing Abbott’s innovative narrative approach is her singular prose style, a concoction equal parts hardboiled, cinematic, and poetics, all wrapped in the down-and-dirty grit of true crime reporting. The increasingly fevered passion of Marion seems to infect the novel as it moves from ecstasy to fury, giving the impression that is in first-person even though it is really in third-person. Whereas someone like Ken Bruen is pushing the hardboiled aesthetic to its minimalist limits, Abbott takes the opposite approach, suffusing her novels (and short stories) with eloquent expressions and revelations that would be despairing were they not so gracefully put. A few of my favorite passages are excerpted below.

The book is released today, July 7th – be sure to pick it up as soon as possible. I give it my highest recommendation, and it’s sure to be one of the most enduring releases of the year. Abbott is currently on tour with Theresa Schwegel, and the two of them are crossing the country in support of their latest books. Head out and support them, and buy their books. More info on their tour is located here.

And now for the quotes:

“She wondered, as she kept her eyes on the hotel, which sprawled a full city block and had a front canopy of gold, if this awfulness in her was new, a spell cast, or something inside her that he had stoked or merely touched and watched her unfold.”

“For some things there can be no forgiveness, nor even words. Some things are meant only to be fevers in the brain.”

“But then she thought about her own: here a man with a way of smiling so and doffing hat and tilting head just so. These accumulations of gesture and a tender word or two and then she pliant on any bed, seat cushion, what have you. Well, if that wasn’t a weakness, what was?”