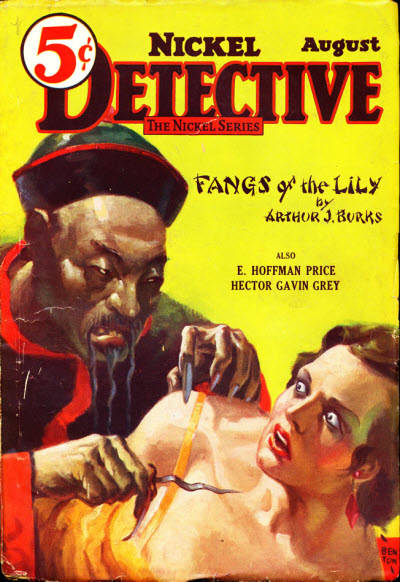 This week’s selection for Stories for Sunday comes from one of the most searing, merciless writers of his day: Horace McCoy. He is best known for his Depression-era nightmare They Shoot Horses Don’t They (1935), about a hellish dance marathon and its myriad participants – all of them, literally, losers at the end of their ropes. Among his other excellent novels is No Pockets In a Shroud (1937) about an idealistic journalist who learns to keep his mouth shut the hard way; I Should Have Stayed Home (1938), a brutal account of the false-fantasies of 1930s Hollywood that stands alongside Budd Schulberg’s What Makes Sammy Run (1941); and Kiss Tomorrow Goodbye (1948), as ruthless an account of a gangster that has ever been published.

“Trapped by Silver” was originally published by Nickel Detective in August 1933 at a time when the author had already left his position as a full-time journalist and was trying to make a go at it in Hollywood. This seems to inform the somewhat mysterious first-person narrator, whose identity is never fully explained. It appears that he is a screenwriter, or filmmaker of some type, who is accompanying Police Sergeant Donovan as he investigates the seemingly natural death of a millionaire doctor. But as he begins to question those closest to the deceased, Donovan begins to suspect that there may be more than meets the eye.

“This is the kind of a thing,” Donovan said, “that makes me wonder whether I got promoted to the homicide squad or demoted to it.”

Classic McCoy, his dystopian vision is subtly on display in “Trapped By Silver.” As the story unfolds, several layers of greed and corruption become apparent – some even sanctioned by law. The backstory of the deceased’s immense wealth is that he accepted payments of land from impoverished patients, which unbeknownst to their owners was rich with oil. And even the narrator and the detective seem to be complicit in this merry-go-round of exploitation, as the story ends with a cynical quip that suggests this might become the foundation for a movie. There’s always more money to be made off a corpse – “trapped by silver,” indeed.

Cover image courtesy of Galactic Central.
Posted by Cullen Gallagher at 10:59 AM