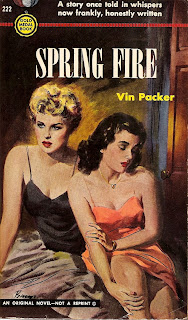 “A story once told in whispers now frankly, honestly written,” advertises the original Gold Medal edition of Vin Packer’s Spring Fire, first published in 1952. With a tagline promising scandal and equally lurid cover art by Barye Phillips showing two young women in revealing nightgowns seated on rumpled purple bedsheets, initial readers certainly got what they paid for. For some, it was a tale of forbidden love between two young college girls, naïve freshman Susan “Mitch” Mitchell and campus beauty queen Leda Taylor, and their attempts to come to terms with their “improper” relationship and keep it hidden from society.

Other readers, however, felt liberated by its content: “When the book came out I got tons of mail from female readers who were so delighted to read a lesbian novel,” the author revealed in Queerty. “Gold Medal had boxes of mail waiting for me when I went in one day. Of course, my family didn't know about it. I would have gotten flack if they had.” Her family didn’t know about it because “Vin Packer” was a pseudonym for Marijane Meaker, one of many that the author would use throughout her career (others include M.E. Kerr, attached to young adult fiction, and Ann Aldrich, used for non-fiction writing).

Fifty-seven years later, what is striking about the book is not how “scandalous” Spring Fire is, but how sensitive and sincere Packer’s writing can be. While American society has certainly changed since 1952, certain things seem to be the same: young kids still run off to college, uncertain of who they really are. They go to escape mom and dad and the hometowns that try and box them in. They go to parties, they drink too much, and certain things happen that shouldn’t. Some are more naïve than they wish to admit; others have more experience than someone their age should. Nor is it only the girls who are struggling with their sexual identity – the boys have their fair share of issues, including rage and insecurity.

Everyone is trying to fit in. And they’d do most anything to achieve it. 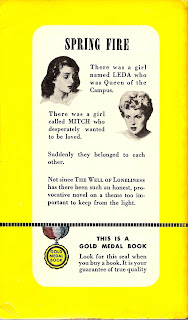 Three-quarters of the way through the book, however, there is a noticeable shift in not only the story, but also the writing, as though the author no longer believes in what she is writing. Mitch and Leda’s relationship is discovered, and they are at the mercy of society’s unforgiving and highly prejudiced scrutiny. The conclusion of the story is in complete alignment with the conservative mores at the time, a compromise necessary in order to have the book published at the time. Still, Packer managed to sneak in some subversive elements into the ending. In her essay “From Cold War Lesbian Pulp to Contemporary Young Adult Novels: Vin Packer’s Spring Fire, M. E. Kerr’s Deliver Us from Evie, and Marijane Meaker’s Fight against Fifties Homophobia,” Michelle Ann Abate points out that, “In a final detail that calls further attention to the absurdity of [the ending], Mitch is presented as happily dating a young man with the symbolic name Lucifer in the closing pages of the novel.” A “happy” ending, indeed.

Packer’s work has begun to receive more attention in recent years, which has brought several of her novels back into print. Spring Fire is available from Cleis Press, and Stark House Press has releases several two-fers. Marijane Meaker also has a website setup for her alias M.E. Kerr. Packer also has a great short story, “Round Heels,” in Megan Abbott’s anthology A Hell of a Woman, available here from Busted Flush Press.

And now for a few excerpts:

“For a long time she was down in the mire of pitch black and the quicksand sucking her in and her whole head dizzy and the pain. Then it was over and she could feel him kneeling beside her…”

“Monday night was chapter-meeting night in Greek town, and there was a reverent hush in the neighborhood. Decisions and rules and amendments to rules were being developed throughout the area, and it was like a grand corporation manufacturing a variety of brands, all tested, all ready to compete with one another.”

“The words went on endlessly, like a radio playing in a room when you do not listen constantly, but now and then, catching illusive scraps of the whole meaning, the crumbs of an endless dialogue.”

“It was like picking up a book and reading the things the main character did and said and his description and thinking vaguely, at first, Why, I’m that way a little. Then more, until the realization comes like a giant boulder down the hill and crashes into you, pulverizing you with the knowledge that this is you, this character.”
at April 23, 2009