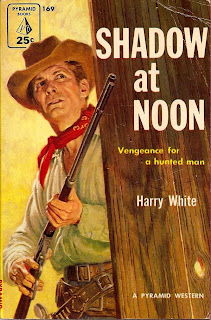 As if the thinly veiled pseudonym wasn’t enough of a hint, the author bio for Shadow at Noon (Pyramid Books #169, 1955) makes it plain who the real writer is: “Harry White is one of the names used by a well-known western writer. Besides his many successful westerns he is also the author of novels of mystery, suspense and adventure.” You’ve probably guessed it by now, but the answer is Harry Whittington.

Whittington brings the same trenchant prose and dynamic yet concise plotting that characterized Gold Medal classics like Ticket to Hell to the Wild West of Shadow at Noon. Like Howard Hawks’ openings to both Rio Bravo and El Dorado, Whittington opens with a cinematic bang and forgoes any lengthy introduction to the character. Thrown headfirst into their world, we come to know them through high-pressure, decisive situations that show their true selves.

As Shadow at Noon begins, Jeff Clane is in a semi-conscious state, lost in a delirium of pain as a stranger is removing a bullet from his gut. Memories come in and out of focus: of meeting a girl who turns out to be the wrong one for him; of running from her trigger-happy suitor; of being set-up to die in a rigged duel; of somehow making it out alive, only to be arrested and falsely accused of murder; and of somehow escaping, but with a bounty hunter hot on his trail the whole way.

In his review of the book, esteemed author James Reasoner wrote that, “Whittington puts his characters through both emotional torment and physical torture.” The opening scene is indicative of Whittington’s ability to not only precisely capture a character’s psychology, but to imbue his words with the necessary emotional weight and immediacy to make the reader live the scene. 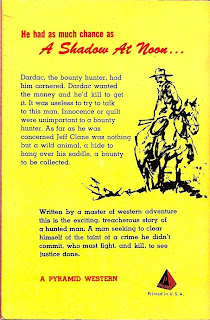 Upon awakening, Clane finds himself in the care of a ranch family that has their own troubles. It seems someone has rolled into town and is trying to run local farmers off the land that they settled and cultivated. Clane then finds himself torn between proving his own innocence and helping those who saved his life. He suffers from this desolation caused by the futility of his own personal quest, as well as the knowledge that he is putting all the farmers and their families at risk. He sees justice nowhere, and no longer believes in it. It’s the anxiety of living in a world that has is not immoral, but in which corrupt morals reign supreme.

Using only the barest of plot elements, Whittington has filed down this story to its core: a stark, emotionally driven novel of revenge and desperation. Many of Whittington’s noir themes have seeped into this Western, particularly the innocent man on the run, as well as the protagonist who must wrestle with his own violent tendencies. With breakneck pacing and vigorous action scenes, Shadow at Noon is an excellent example of Whittington’s unmistakable craftsmanship.

A taste of Whittington’s prose:

“He lay passively between painful sleep and the agony of waking. He was aware of a desperate sense of urgency with the sudden realization that there was no longer any motion of his horse under him.”

“From her white dress he knew she was a waitress. From the look in her eyes he knew all the rest he needed to know about her.”

“Nothing had ever happened in his life to make him believe in anything.”

“A disturbed chicken clucked once.”

“Without faith in something, there was only one thing to do, go back in that cabin and murder Dardac.”

“It was the loneliness, the singleness of purpose, the starting on a trail and going through hell, but never turning back.”
at April 17, 2009