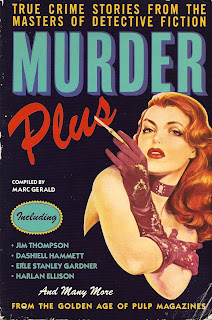 A fortuitous find on the sale rack at Argosy here in New York – Marc Gerald’s vintage true crime anthology Murder Plus (Pharos Books, 1992). I had been wondering if any of my favorite crime writers had ever done non-fiction writing (or at least, writing not necessarily categorized as “fiction”), and low-and-behold I stumbled upon this collection. Craig Rice, Harry Whittington, Jim Thompson, Robert Bloch, Day Keene, to name just a few—it seemed too good to be true. Having just finished the book this evening, it certainly is true, and Gerald’s selection certainly doesn’t disappoint. Murderesses of every variety (from paranoid mothers to double-time wives to outright loonies), scheming businessmen, movie directors with shady pasts, and war heroes that don’t live up to their reputation are just a sampling of the captivating criminal element housed within Murder Plus.

In addition to a fine selection of stories from the likes of True Detective, Master Detective, Underworld Detective (there’s a trend developing….), and others, Gerald also provides an insightful introductory essay that outlines the rise and fall of true crime pulp publications. A one-time editor of True Detective, Gerald’s investment in the magazine began in his childhood, when his parents and teachers expressed outward concern for his avid interest to such a lurid publication. He not only has the behind-the-scenes know-how, but also a sincere passion for the genre. And even while he is chronicling their demise as the magazine went further towards the back of the shelf (with the content taking a similar direction), he is able to convey their place in history, and the enthusiasm that readers felt during the heyday of true crime pulp.

“From the get-go, [True Detective] ran stories about real kidnappings, bank scams, forgeries, art thefts, cons, and swindles; but its specialty was always murder, and no matter where you lived, it was always too close to home. You could be one of humanity’s rejects or beneficiaries—a ritzy socialite, a bored housewife, a bell boy, a bartender, a truck driver, a farmer, a gambler, or a bum—and still be a killer and still be killed.”

There’s quite a bit of variety to the stories included. Some are rendered in first-person while others use third-person narrators, and some take the perspective of investigators whereas ssome use obviously invented “characters” (Hammett’s references The Continental Op, and Van Dine’s has Philo Vance tell the story). And even though the bad guy/girl is always caught in the end (apparently an editorial rule), the sympathy is not always on the side of justice. In some of the best stories we are wholly invested into the crime, such as Harry Whittington’s standout “Invaders from the Sky” about an ambitious bank heist involving several stolen airplanes and a hijacked police cruiser. 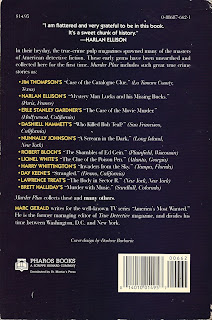 While I much enjoyed reading some of my old favorites, I also discovered two writers who I had never read before who really piqued my interest: Lionel White (whose novel Clean Slate was filmed by Stanley Kubrick as The Killing) and Bruno Fischer. I will certainly be tracking down some of their books in the near future.

With prose ranging from the coldly realistic to the evocatively poetic to the darkly comical, the stories are all distinct and fun to read. Here are a few of my favorite quotes:

“And yet, he lived. And women died.” –Robert Bloch, “The Shambles of Ed Gein”

“The women came and went like the autumn breezes, an endless stream of easy-virtue gals, marching in and out of Fast-Bucks Lucks’ fabulous George V suite.” – Harlan Ellison, “Mystery Man Lucks and His Missing Bucks”

“Even by the waning light of the March afternoon, she could see deadly, crimson stains that crept from beneath the girl’s dark, disheveled hair. One arm dangled loosely over the side of the bed. The fixed eyes stared in a look of astonishment. Her mouth was half-open as if death had stopped a scream.” –Leslie Ford, “”The Star-Faced Fugitive and the Murdered Maid”

“Judge Stephen—with a certain rather lunatic satisfaction, perhaps?—donned the black cap and pronounced that Florence Maybrick should be hanged by the neck until she was dead. A short time later he was himself pronounced insane.” –Patrick Quentin, “The Last of Mrs. Maybrick”

“The printed transcript of any evidence makes the scene of a crime seem like a rather calm and quiet place.” –Craig Rice, “Murder in Chicago”

“On the twenty-third of July, 1908, her scheming blond head fell under the executioner’s knife. (The executioner it seems was partial to blondes.)” –S.S. Van Dine, “Germany’s Mistress of Crime”
at March 21, 2009