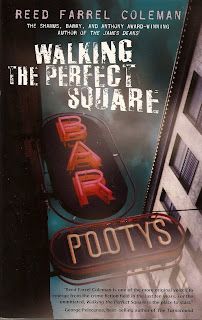 More so than any other private detective I’ve ever read about, Moe Prager seems like a real human being. He’s no crusading knight, action hero, or existentialist antihero. Nor is he just an “ordinary” guy set in “extraordinary” circumstances. The story of Walking the Perfect Square comes right out of our daily newspapers, and its characters are people we pass on the street everyday, sit next to on the bus, or live under our same roof. It would have been easy for Reed Farrel Coleman to concede to genre, to make compromises with his story just because certain things are “accepted” in mystery fiction. Instead, he tries to ensure that the gravity of real life is felt in every gesture, in every plot twist, and in every line of dialogue. He’s skilled enough a storyteller than he can tie up loose ends without necessarily resolving the tensions felt by the characters. For, if anything, the circumstances of Walking the Perfect Square continue to haunt not only the characters, but also the readers, long after the book is over.

When a dying man he has never met calls him to his bedside to hear a secret, Moe Prager is sent thirty years into the past to relive his first ever case as a private investigator. It is 1978, and he has just been laid-off from the NYDP during an economic slump. Still recovering from an un-heroic slip on a piece of paper that left his knee badly injured, Prager takes a job as a private investigator in a missing persons case involving a young college student that disappeared after a night at the bar. The more Prager searches, however, the more he is convinced that not only does the kid not want to be found, but that his family might not want him found either.

Originally published in 2001, Walking the Perfect Square was reprinted by Busted Flush Press in 2008 in a great new edition with a foreword by Megan Abbott (Edgar-winning author of Queenpin and other excellent books) and an afterword by Coleman in which he discusses the creation and evolution of Prager’s character. Abbott’s introduction, in particular, is an invaluable companion to the book, helping to place Coleman within the context of the private eye genre, and pointing out where he diverges from tradition and forges his own path. “Betrayals can and do occur, but Prager’s relationships—romantic, familial, collegial, fraternal—are as central to this novel as [Phillip] Marlowe’s are to his,” Abbott writes. This sense of Prager being firmly a part of, and product of, his community is something missing from Hammett, Chandler, Spillane, and many of the foundational writers. Those detectives are loners, marginal characters that can’t exist within the world as it exists. They have to be a force for change, whether it is actualized or not. Prager, on the other hand, is subject to the forces at hand. Like the rest of us, he’s trying to get by. He’s not happy with what he sees, but he knows he’s not a superhero. He does what he can, and lives with the consequences.

Perhaps Moe Prager is best summed up in this one line: “No, Mr. Beaman. I’m not smart. I just have a conscience.” 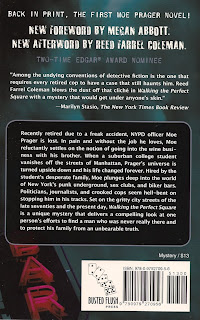 And lest you get the impression that Coleman lacks a sense of humor – well, he doesn’t. In fact, he’s pretty damn funny. As you’ll see, some of my favorite lines in the book are full of Coleman’s warm, perceptive wit. If you’d like to sample more of Walking the Perfect Square, head over to Busted Flush Press where you can purchase the book, or download this PDF that includes a lengthy excerpt of the novel, as well as both Megan Abbott and Coleman’s new essays.

And now—on with the quotes!

“The answer I give as to how I hurt the knee is inversely proportionate to the amount of alcohol I’ve consumed. Sober, I tell them I was hit by a flaming arrow shot by some schizophrenic junkie from a housing project roof in Queens. Two drinks, I tell them I injured the knee catching a baby thrown from a burning building by its frantic mother. Shitfaced, I tell the truth: I slipped on a piece of carbon paper in the squad room.”

“He wasn’t impressed by my powers of deduction. He wasn’t the type to be impressed by much. Maybe, I thought, if I pulled a silver dollar from behind his ear…”

“Pooty’s was the kind of place where people were encouraged to gouge their initials into the tables with keys. Old poets went there to die.”

“When I walked in even the flies yawned. So much for High Noon.”

“His ears were so littered with studs, safety pins and dangling razor blades that if he were to stand between two strong magnets his face would peel off.”

“Eating ribs on a second date takes nerve. It’s difficult to look suave gnawing on dead pig bones and licking red goo off your fingers. And scraping sinew out from between your teeth always drives ‘em wild.”

“I suppose it’s a scientific impossibility, but sometimes it just seems that, like a rug or silk tie, the atmosphere can be permanently stained.”
at February 12, 2009