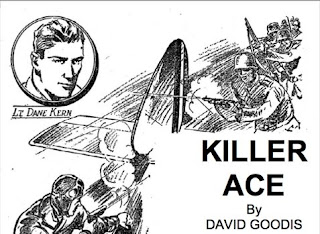 For this week's Stories for Sunday I am featuring a story by noir master David Goodis - but not one of his mysteries. Like many of his era, Goodis learned his craft by pumping out stories for pulp magazines, nor was he limited to only one genre. In addition to mysteries, Goodis was a prolific action-adventure writer, and "Killer Ace" is one of the many aviation yarns he penned in the early 1940s.

Originally published in The Lone Eagle in February of 1941, those familiar only with the introspective, minimalist narratives of Black Friday or The Blonde on the Street Corner are in for an eye-opening surprise. "Killer Ace" is chock full of action on every page - whizzing planes, streams of bullets, and broken jaws. Written ten months before Pearl Harbor, the story concerns an American student named Dane Kern studying physics at Oxford who enlisted in the British military because of his interest in aviation. As the story opens, he is the sole survivor of a disastrous mission in which the German pilot Von Krim killed everyone else in Kern's squadron. Nor is this the first time Von Krim and his crew have defeated the British pilots. Kern is convinced that someone must be giving the Germans advance information about their plans, and he thinks he has an idea who is behind it all...

Here are a few examples of Goodis' pen in action, including the sizzling first line:

"The German plane came hurtling out of the sky like a pain-crazed eagle. Trigger fingers jabbed death-filled lead through the air four thousand feet up. Von Krim's mouth twisted in a devilish grin. He looked like Satan himself as he dove for the Englishman's tail, raced a pattern of dots up the fuselage, and then shrieked in eerie delight as that death-line reached the cockpit. The English pilot slumped down in his seat, his brain riddled by bullets."

"They were fighting like madmen. The tears in their eyes were not tears of fright or horror. They were tears of sorrow, tears of rage, tears of vengeance. But the English flyers needed more than sobs to combat the ruthless von Krim and his squadron of devils."

"They went down like tall grass before a scythe, those Nazis."

Liven up your Sunday morning with "Killer Ace" by David Goodis, courtesy of PulpGen.
at February 22, 2009