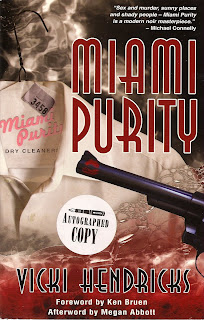 A first line says a lot about a novel. It can pull you into the story, introduce you to a character, and give you insight into the writer. The first line of Vicki Hendricks’ Miami Purity is one of those phrases that does all three, and so much more. “Hank was drunk and he slugged me – it wasn’t the first time – and I picked up the radio and caught him across the forehead with it.” From first word to last, Miami Purity is noir without mercy. Hendricks captures the throbbing emotions of her characters: angry, desperate, depraved, sleazy, passionate, and uncontrolled, they are like blood vessels ready to burst. Their vigor for life threatens their very existence, and like two drunken, sweaty dancers in a darkened bar, they rub right up against the edge of destruction, at once afraid of pushing through to the other side and unable to think of anything else.

The first line introduces Sherri Parlay as a woman who has not only taken a few hits in her time, but also dealt a few blows herself. One of those blows, in fact, sends Hank to the morgue and Sherri into an alcohol-infused daze. “I went on drinking and missing that son of a bitch like hell… He had a terrible mean streak, but we were good together – specially when we got our clothes off.” No one ever said love was easy, and Miami Purity never lets its characters forget it. Sobered up, Sherri takes a job at Miami Purity Dry Cleaners, owned by the hard-drinking, hard-boiled Brenda. Almost immediately, her life gets back on track, but not the track that Sherri intended. Instead, she’s fallen – hard – for Brenda’s son, Payne, and finds herself enmeshed in a perverse, Oepidal conflict that would knock Freud for a loop.

Originally published by Pantheon in 1995, Miami Purity was re-released in 2007 by Busted Flush Press with an introductory “poem” by Ken Bruen, who nails the book on the nose by dubbing it, “as black as the soul of a priest with malevolence on his mind, hollow prayers on his beads.” And the always-insightful Megan Abbott follows up the novel with an Afterword that traces Miami Purity’s hide-and-go-seek game with James Cain’s iconic The Postman Always Rings Twice. “We can savor Hendricks’ manipulation of noir conventions, bringing forward many of the genre’s compulsions, smashing some and recasting others, all with abandon.” With such clearly defined generic archetypes, there’s no safe strategy for either avoiding or embracing them – in fact, outright avoiding seems absolutely impossible. What Vicki Hendricks proves with Miami Purity is that these models, some of which were cast over eighty years ago, are far from dead. Nor are they hegemonic or unalterable. Self-sufficient, sexually assertive women are no longer limited to being a femme fatale, nor are men resigned to being their victims; instead, with the homme fatale on the loose, deadly is the male. 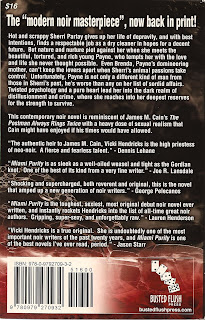 You can purchase a copy of Miami Purity directly from Busted Flush Press by visiting their website HERE, or drop by your local independent bookseller.

Still wanting more? Here are a few choice quotes from the book.

“Even feeling lousy I enjoyed watching those rosy bags of clothes sway and roll their way around the bend towards me. It was like a sideways Ferris wheel. It started quick, got up speed, and then jerked to a stop. Round and round in whatever direction the button pusher made it go. Like my life, I thought. I start to think I’m getting somewhere but find out I’m really on the same old flat track going round.”

“She put a hand on my upper arm. I think she meant it to be firm and warm, but her nails were long and felt a little like claws.”

“We can’t make it good. There’s no good. It was all in my imagination.”

“I look back out the window through streaks of wet grime. The sky is still gray, and water drips off the icy gutter. Let that red sun shine down on Miami, like always, and make the blue eyes sparkle with promises for somebody else. Ain’t no sunshine in Baltimore. The sky’s solid and cold, like a heart that’s stopped.”
at February 27, 2009