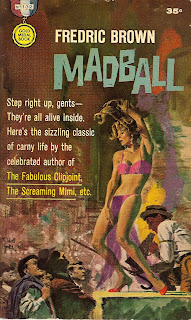 Fredric Brown was one of the first crime novelists that I became a devoted fan of, accumulating and devouring anything he wrote that I could get my hands on. His sense of humor was like nothing I had ever encountered before, laden with sideshow strangeness, cosmic ironies, and that hardboiled cynicism that is the mark of a former journalist (which Brown was). But the more I read, the more extraordinary (and odd!) his writing became, and the more I valued and looked forward to his absurd nightmares – and the weirder the better!

With its combination of carnies and murder, Madball is pure Brown, and also one of his best novels. Originally published by Dell in 1953, Madball was later reprinted as Gold Medal #21132 in 1961. (It also appeared in a magazine as a condensed version titled “The Pickled Punks.”) The story concerns a traveling carnival and a secret that several people think only they know: somewhere on the fairground $42,000 in stolen bank money is hidden, and each of them want it. Brown allows each of his characters to narrate their own parts of the story. There is Mack Irby, the former grinder of an “unborn show” (which exhibits bottled human and animal fetuses) who stole the money and has returned to collect it; Dr. Magus, the alcoholic mystic who is afraid of his own crystal “madball” and its surprisingly prophetic powers; Dolly, who is scared of her knife-throwing, jealous husband; Sammy, a young escapee from a mental ward who has found a home as a carnival worker; and then there is “The Murderer,” as Brown refers to him…

Brown orchestrates all of these characters and more in a symphony of the bizarre as only Brown could conceive of. The carnival atmosphere, in particular, Brown describes in such evocative and intimate details that Anthony Boucher commented, “you’ll remember [it] more vividly than any you’ve attended.” There’s almost something scientific about the way he describes the various shows (particularly the “pickled punks” exhibition) and the colorful characters on the lot. The setting is a favorite for Brown, who also set one of his Ed and Am Hunter mysteries, The Dead Ringer, in a traveling carnival.

More than just giving us plot twists and surprise endings, Brown is able to continually knock the foundation out from under us at key moments. No sooner has he introduced a seemingly integral narrator than he has killed them off. And while, for most of the novel, all of the characters seem to exist in their own disparate stratospheres, as soon as one of them goes a little off course then the entire Madball universe collides in a cataclysmic explosion. Most importantly, though, is the sense of terror that Brown instills in the readers. Certainly much of Madball is humorous, however the characters’ fright is no laughing matter. Sammy, in particular, seems to be caught in a fragile world, with his worst nightmares always on the verge of turning into reality. And when Brown puts us in his mind, we too are subject to his vulnerable psychological and emotional condition. 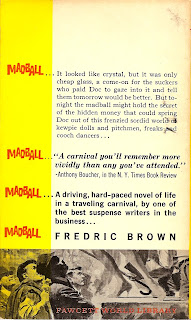 Madball, like most of Fredric Brown’s novels, is currently out-of-print. Whether you are a long-time fan or someone curious to discover a new author, Madball is well worth the effort to track down. In the meantime, pick up a copy of his masterpiece Here Comes a Candle, currently available from Centipede Press in beautiful paperback edition that includes extra goodies from the author, including a short story and an essay. Also—Centipede list Madball as a forthcoming title, so support the independent publisher and show them there is an audience for more Fredric Brown titles!

Here are some of my favorite quotes from the book. I found it difficult to isolate a few sentences or phrases that could do justice to Brown’s ability as a writer. I tried my best to find some lines that struck me as indicative of his style. Though, the best thing would be to just read one of his books and revel in the joy that is “Fredric Brown” firsthand.

“Young lust and then experienced lechery, with a murder in between. All in all, quite a night.”

An example of Brown’s logical illogic (or is it illogical logic?): “Except for somewhat anachronistic spats, you might have taken him for a specialist in some highly remunerative branch of medicine, perhaps a top flight psychiatrist, or a college president. But the spats, and to a lesser degree the cane, marked him as none of these; no professor or doctor dares dress anachronistically lest his public assume that his ideas date back to the same eras as his dress. Obviously, then, Dr. Magus was a man of means for only the wealthy dare be eccentric and only the eccentric wear spats.”

And who else but Brown would quote the Gaelic word for whiskey: “Uisgebaugh forever.”

“Besides, the show must go on. Or must it? The carney could get along for one night without a mitt camp. And if he sobered up he’d realize how slim a chance actually he had of getting that money for himself. Whereas is he kept on drinking he could dream about it, even spend it in his imagination.”

“It had been daylight for several hours before the light in Dr. Magus’s eyes brought him near enough the threshold of consciousness to make him turn over and bury his face in the pillow. But the act of turning brought him across that threshold, unreturnably across. Moving his head had done it; movement had wakened the little monsters inside his skull and they had immediately picked up their pneumatic drills and started trying to drill their way out through his forehead and temples.”

“Out into the night, the lonely night bright with moonlight and dark with dread.”
Posted by Cullen Gallagher at 2:05 PM