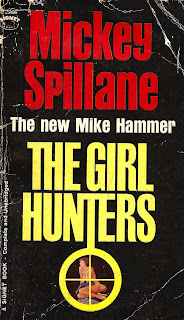 [Note: Please forgive the poor quality of my paperback edition of The Girl Hunters. I don’t treat my books this way! This was the condition I found it in at a thrift store. I like to imagine that it has passed through many different hands, entertaining multitudes of readers. Thus, instead of an abused book, it’s one that has been excessively loved. Until I come across a better copy, it will have to do for now.]

At the end of Kiss Me Deadly (1952), the sixth Mike Hammer novel, our hero is limping away wounded, discouraged, and uncertain—three words that would never have been used to describe him back when he first appeared in I, The Jury (1947). But between those six novels, Hammer had been through a lot. Moreover, Spillane had grown by leaps and bounds as a writer, and even by the time of Vengeance is Mine (1950) he was already beginning to push the boundaries of his character. Hammer’s virility was challenged; his sexual appetite mocked; his violent nature insightfully criticized. So it’s no wonder that the last paragraph of Kiss Me Deadly reads: “I looked, looked away. The door was closed and maybe I had enough left to make it.” Maybe—or maybe not.

It was nine years before Spillane published another novel, The Deep in 1961. The next year, after a ten-year absence, Hammer made his next appearance in The Girl Hunters (1962). The always-blunt Spillane left no questions about whether Hammer “had enough left to make it.” The first line of The Girl Hunters reads: “They found me in the gutter.” In six words, Spillane manages to condense years of despondency and self-destruction. For Hammer, that pillar of masculinity, to wind up in a gutter—what more needs to be said? He had hit rock bottom. The world had lost faith in him. He had lost faith in himself. But one person hadn’t—Velda. Only Mike thought she was dead.

When a dying man whispers to Hammer that Velda is alive, fire returns to his eyes. The entire novel is dedicated to Hammer’s slow regeneration from drunken bum to red-blooded army-of-one: catching up with old contacts; winning the respect of dissenters who remember his seven-year binge; re-acquiring a gun license; exercising his manhood; refining his instincts; but most importantly, regaining his confidence. For fans of the series, there’s actually something quite touching about those few persons—a landlord, a newspaper salesman—that remained loyal to Mike through the years, and the warm way they greet him when he decides to return to life. They are never emotional and always professional, yet behind the restrained gestures and exchanges is a flood of sentiment and appreciation. Such is Hammer’s code of conduct: never beat a guy when he’s down, give a helping hand when he needs it, and never make a big deal of it.

As Mike returns to “his old self,” it’s apparent that Spillane is undoing the damage he had done to Hammer in the past few novels. He still has his weakness for women—particularly the “wrong woman,” as evinced by the archetypical ending which is like an old friend to Spillane fans—and he admittedly fumbles where he shouldn’t. But he is no longer haunted by the moral condemnations he received in One Lonely Night (1952)—in fact, he refers to them as almost justification for his actions. Spillane is not experimenting with Hammer the way he did in previous novels: not compromising his virtues or even his virtuosity. As if apologizing for the degradation, Spillane is allowing Hammer the opportunity to recollect himself and come back stronger than ever—physically, that is. In terms of character, he isn’t as nuanced or complex as in the best of the series (Vengeance is Mine and Kiss Me Deadly); nevertheless The Girl Hunters seems a necessary step after the beatings Hammer had taken in the past. 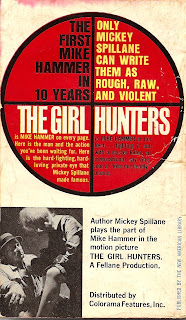 Spillane’s style, however, continues to be in top form: hallucinatory images of streets, violence, and passion; a fluid stream of words alternately poetic and lurid; pitch-perfect punctuation, particularly the fearless use of italics and exclamation points, which are indicative of his total control of tone, tempo, and language; and a sense of humor that embraces excess and delirium. In the heat of the moment, Spillane’s plotting care less for logic than intensity; often it is not until a few pages later that Hammer will go back and explain the importance of a particular detail. After all, who is solving the case—Hammer or the reader? Hammer waits for no one, not even Spillane.

To read Spillane is a great joy: he revels in words the way a composer relishes the same pitch from different instruments. His action scenes are like blitzkriegs—lightening fast, but able to create a precise image in your head. However, I prefer the more melancholic Spillane, the one who reflects on the loneliness of rainy nights in the city, and who is able to conjure up the most personal, indescribable emotions through the slightest suggestion. As one quote begins, “There is no way to describe the immediate aftermath of a sudden shock,” yet somehow he is able to do so. Here are my favorite passages and quotes from the book, though there are so many more I could have chosen.

“They found me in the gutter. The night was the only thing I had left and not much of it at that.”

“You can stay dead only so long. Where first there was nothing, the pieces all come drifting back together like a movie of an exploding shell run in reverse. The fragments come back slowly, grating together as they seek a matching part and painfully jar into place. You’re whole again, finally, but the scars and the worn places are all there to remind you that once you were dead.”

“I sat there as if I were paralyzed: for a second totally immobilized, a suddenly frozen mind and body that had solidified into one great silent scream at the mention of a name I had long ago consigned to a grave somewhere. Then the terrible cold was drenched with an even more terrible wash of heat and I saw there with my hands bunched into fists to keep them from shaking.”

“There is no way to describe the immediate aftermath of a sudden shock. If it had come at another time in another year it would have been different, but now the stalk of despondency was withered and brittle, refusing to bend before a wind of elation.”

“The street was slick from the drizzle that had finally started to fall and the crosstown traffic was like a giant worm trying to eat into the belly of the city.”

“The place was a brownstone building in Brooklyn that stood soldier-fashion shoulder to shoulder in place with fifty others, a row of facelike oblongs whose windows made dull, expressionless eyes of the throttled dead, the bloated tongue of a stone stoop hanging out of its gaping mouth.”

“I hauled the .45 out and, without even knowing where the silenced shots were coming from, I let loose with a tremendous blast of that fat musket that tore the night wide open with a rolling thunder that let the world know the pigeon was alive and had teeth.”

“There is a peculiar anonymity you can enjoy in the city on a rainy night. You’re alone, yet not alone. The other people around you are merely motion and sound and the sign of life whose presence averts the panic of being truly alone, yet who observe the rules of the city and stay withdrawn and far away when they are close.”
Posted by Cullen Gallagher at 2:07 AM