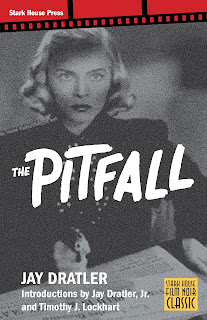 While the 1948 film Pitfall has risen to be regarded as a film noir classic, Jay Dratler’s original 1947 novel The Pitfall has been unjustly neglected. Stark House Press, re-releasing the book for the first time since 1956, reveals that Dratler’s novel is darker, sleazier and less forgiving than the film it inspired. A brutal portrait of blind lust and self-destruction that out-Cains even James M. Cain, Dratler’s The Pitfall deserves to known as a stellar example of 1940s American noir. Stark House’s edition, which includes introductions from the author’s son, Jay Dratler, Jr., as well as novelist Timothy J. Lockhart, will hopefully restore the novel’s rightful reputation.
In the novel, Jon Forbes is a successful screenwriter who seemingly has it all. He has a daughter, Ann, devoted to him; and his wife, Sue, is pregnant with their second child. And he works his own schedule—afternoons and evenings—at home, where his secretary Kate takes dictation. He even has a friend on the police force, Mac, who gives him insider tips for his scripts.
And all it takes is one whisper from Mac about Mona, the wife of a purse snatcher named Smiley currently serving three months, to sink his entire life. Mac wants Jon to cozy up to Mona and pave the way for him. Jon disagrees at first, but can’t get Mona out of his mind. Pretending to be a friend of her husband, Jon arranges to have a drink at a hotel bar. And from the moment they meet, Jon’s doomed fate is sealed—if only he were smart enough to realize it.
“I think you’re going to have trouble with me mister,” she said softly. “And I think my little old man is headed for a marble slab.” 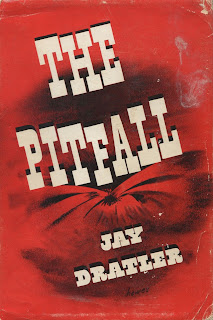 From there, it’s a fast-moving, downward slope. Jon stops working on scripts, he ignores his family, he skips out on parties, all to be with Mona. When Jon refuses to hand her over to Mac, however, the cop gets violent. And with Mona’s jealous husband set to get out of jail, Jon must decide how much he’s willing to fight, and which life he’s going to fight for—his affair with Mona, or his family.

Dratler’s The Pitfall has suffered the unjust fate of many source novels for Hollywood movies—credit goes to the filmmakers, and not the author. Even Eddie Muller, in his TCM Noir Alley introduction, completely misrepresents the plot, calling it “a Hollywood drama revolving around the sexual machinations of movie executives and their underlings”—while that sounds like a terrific yarn, it’s not Dratler’s novel at all. Sure, the book takes place in Hollywood, but it has nothing to do with the casting couch and other behind-the-scenes sexism and exploitation. It mostly takes place away from the studio, within the walls of domesticity, as a screenwriter puts aside his family and career to pursue a fantasy that destroys him and his world from the inside out. As the author’s son describes in his introduction, “The ‘black’ in his ‘noir’ genre came from within individuals’ souls—their needs, their lusts, their pride, their temptations, their frustrations, and their dreams, however illicit or impossible. Their struggle was an intenral one, and one among acquaintances, with a background of norms of behavior that everyone then took for granted.”
The 1948 film, directed by André de Toth with a script credited to Karl Kamb, plays up the “everyman” angle of the story, and changes the protagonist to “John Forbes,” an insurance agent played by Dick Powell. He meets Mona (Lizabeth Scott) when he’s sent to inventory stolen property insured by his company and given to her by her boyfriend Bill Smiley (Byron Barr), currently in jail. At first Forbes is all business, but Mona implores him to act human—and soon he’s riding around in her motor boat, which he doesn’t report to his company. Private detective Macdonald (Raymond Burr), hired by Forbes to find Mona, has become obsessed with her, and when he sees Forbes moving in, he thratens to reveal Forbes’s indiscretion. And, just as in the book, it is the release of Mona’s boyfriend that forces Forbes to decide just which life of his he wants to protect.
One of the biggest difference between the book and the movie is its moral gray area—the book has a much blacker center, something that the movie had to compromise in order to pass the Hays Code. In the book, Forbes’s lust is unrepentent: “I never knew I could be that much of a heel—but the seed of it must have been in me, the seed of destruction.” While he’s unaware of the trap he’s stepping into, he’s very aware of his own infidelity and his attempts to manipulate both Sue and Mona. In fact, when he first meets Mona, she calls him out on his lying: she knows he’s no friend of the family, but she’s game for an affair becaues it what she wants. “I’m pleased to meet you becuase you’re delightful. You’re wonderful,” Forbes says. Mona replies, “No, I’m not. I’m a pretty woman you’ve just met. I’m married and my husband isn’t around.” In this way, Dratler is much more fair to Mona than de Toth’s film, which paints her as a manipulative femme fatale out to deceive Forbes from the start. For Dratler, it is Forbes who is the homme fatale; for de Toth, Forbes is a sympathetic character, a victim as much to scheming outside forces as his own desires. Neither character gets out of the mess untarnished, but while de Toth allows Forbes to linger in purgatory, Dratler sends him straight to hell.
The one character that de Toth’s film improves is Sue Forbes. In the novel, she feels that, because she was pregnant and often bed-bound, she was to blame for her husband’s actions, as though she had failed him as a wife. “And she believed it,” Jon reflects. “That’s the incredible part of it. She believe it.” In the movie, Sue (Jane Wyatt) is a much stronger character, and far less forgiving of her husband. “You're not going to the police,” she tells him, when he wants to confess to ease his conscience. “You lied once. It came easy enough for you then. You've got to lie now. I mean this, Johnny, if you drag this family through the dirt, I'll never forgive you.” Dratler’s implicit perspective of Jon seems to have been transferred to Sue for the movie.
Dratler’s book had been sold to Hollywood even before it hit shelves. Many initial reviewers of the novel were shocked by its luridness. As quaint as their opinions might seem today, they offer evidence of how daring and edgy Dratler’s book was in its time. “We felt so dirty after reading this one,” commented Omaha’s Morning World-Herald (February 16, 1947). “It is so sex-packed that it makes the flesh crawl…We can see no reason for writing it, for publishing it or for reading it.” The Oakland Tribune called it “peculiar and lurid…makes Hollywood a James M. Cain land” (February 23, 1947). Shirley Wolter in Montreal’s The Gazette wrote, “Readers will not appreciate his Pitfall. Screen censors would not appreciate his Pitfall. We can only hope Mr. Dratler will appreciate his pitfall…and be the good screenwriter he is.” (April 12, 1947). The Indianapolis Star was also shocked by the book: “[What] is supposed to be Hollywood, changes suddenly to the bedroom and somebody locks the door…The Pitfall might well be changed to the word referring to that type of tumble made famous by slapstick comedians” (January 19, 1947). And The Philadelphia Inquierer felt that “many a reader’s capacity to take such an unrelieved pounding may not be quite up to Jay Dratler’s skill” (June 15, 1947).
The quality of Dratler’s novel was not lost on all reviewers, thankfully. “This is a tight, swift, sexy yarn. And strangely, a very moral one,” wrote Clip Boutell in the Los Angeles Daily News (March 1, 1947). The Gasconade County Republican (July 10, 1947) thought the book was “mostly concerned with sex” and that “in this tautness of style and frankness of characters lies the book’s charm.” And the Latrobe Bulletin called it “Salty, tough, modern” (April 18, 1947). 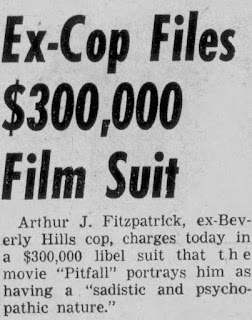 Decades later, Dratler’s The Pitfall is long overdue for a reassessment, and hopefully this Stark House edition will offer the opportunity for the book to ascend to its rightful place in the noir pantheon.
P.S. As a curious sidenote, after the book was published, Dratler was sued for $300,000 by one Arthur J. Fitzpatrick, “a former Beverly Hills policeman, who claims that a character in Dratler’s novel, apparently based on him, exposes him to contempt, ridicule and public disgrace” (Hollywood Citizen-News, August 23, 1948). Los Angeles’s The Mirror reported, “He spoke freely to Dratler, Fitzpatrick says, many nights when the two sat in a police car on the corner of Wilshire Blvd. and Doheny Dr. The move writer assertedly violated his confidence by using the material for his book, the suit claims” (May 4, 1949). Newspapers at the time did not report on how the case was settled.
at December 13, 2022