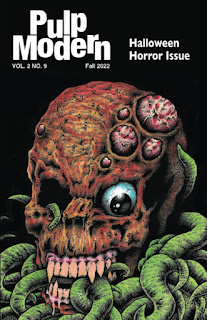 The latest issue of Pulp Modern (vol. 2, no. 9, Fall 2022), edited by Alec Cizak, subtitled Halloween Horror Issue, is a terrific collection. I greatly enjoyed all the pieces, and appreciate Cizak's curation, which brought together a nice variety of fiction, non-fiction, and illustrations, all of which complement each other in how different they are, and together celebrate the breadth of the horror genre. Among my favorites were the opener (Ramsey Campbell's "Out of Copyright") and closer (Stanley Rutgers' "Rejection"), which both offer macabre takes on the publishing industry. In "Out of Copyright," an unscrupulous editor gets more than he bargained for when he republishes a rare text, and in "Rejection" a frustrated writer will do anything to get published in his favorite magazine. Bookending the issue with both stories was a clever and effective editorial choice not only for the obvious thematic similarity, but also because they highlight something key to horror: desire, and most specifically what happens when one is confronted directly with desire. 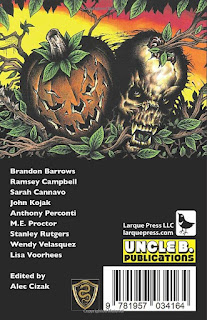 In between these two tales, the remaining stories deal with other aspects of horror. Lisa Voorhees's "The Yellow House" is a clever riff on Charlotte Perkins Gilman's "The Yellow Wallpaper." Here, the protagonist reluctantly takes a vacation at a friend's family home, and finds herself trapped in supernatural circumstances. How characters deal with the uncanny is one of the most fascinating aspects of horror. Sometimes, they embrace it. Other times, they run from it. And others, they reject its possibility entirely, as though they cannot bear to admit its potential reality and how it might alter their own perception of the world around them. I won't spoil "The Yellow House," but it was a surprising and very enjoyable conclusion. The story pairs well with M.E. Proctor's "Apples in the Attic," which also deals with a protagonist's relationship with a supernatural house. In this story, a young woman inherits her grandmother's old home and, while reliving the past, uncovers the property's dark secrets. It's a terrific premise and there are any number of ways that the author could have their character react to the situation, but I think Proctor found the perfect balance that brings closure but allows for the horror's presence to remain and live on in the future.

Among the other works included are John Kojak's "The Curious Case of the USS Arroyo," a sci-fi-horror hybrid; Anthony Perconti's "Dark Amplifications," an essay on Richard Corben's Edgar Allan Poe illustrative work; Sarah Cannavo's "10-48," a comedic tale about two late-night speed-trap cops who get more excitement than bargained for when someone calls in about a clown in the woods; and Brandon Barrows's "You Were the Last," in which a driver rescues a female hitchhiker fleeing an abusive husband, and perhaps finds himself involved in a local ghost story.