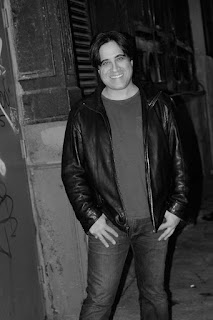 Back in June 2011, I interviewed Jason Starr about his then-latest novel, The Pack, and the interview was published by Spinetingler Magazine. Since the site is down, I've republished the interview below.

In Jason Starr's The Pack, advertising executive Simon Burns life goes into a tailspin after he’s fired from his job. Marriage counseling isn’t helping the intimacy issues with his wife, and being a stay-at-home-dad is harder than it at first seemed. Things start to look up when he meets a group of dads at the playground: Simon has guys to hang out with during the day, and his kid has other children to play with. But after a night of partying, Simon blacks out and wakes up in the woods naked, and all he can remember about his dreams is a wolf. The nightmare continues to haunt him, and as his body begins undergoing changes, Simon fears that he, in fact, might be turning into a werewolf.

Yes—a werewolf—but don’t start thinking this is another Twilight spin-off. Nor is The Pack anything close to a conventional horror novel. The story is less about physical transformation than it is emotional and psychological changes, and how they can affect—and sometimes destroy—a relationship. Simon is one of Starr’s most realistically and sympathetically crafted characters, and the slow dissolution of his marriage is harrowingly and poignantly written. Much like Panic Attack, The Pack is really about the discovery of a father’s latent violent urges and the disastrous after-affects it has on his family.

Don’t let the werewolf element throw you off. The Pack is pure Jason Starr, and it is one of his most gripping novels yet.

Pulp Serenade: When I first heard that The Pack was going to have werewolves, I was expecting more of a horror novel, but the finished product certainly doesn’t feel like a conventional genre book.

Jason Starr: I definitely didn’t intend to write any type of horror or genre novel, but I knew that when you had werewolves in the story that’s one of the expectations a reader might have. I think the other expectation is that it would be a mystery-romance because these days there’s so out there with werewolves and vampires. I was just trying to write my regular type of book, a sort of social drama about relationships and the city, with an added twist or element.

PS: Where there any particular conventions you were trying to stay away from?

JS: I was definitely trying to stay away from Romance, like those Twilight books, for example. I knew I didn’t want to go in that direction. I think one different thing about The Pack is that I start in the real world, not a paranormal world. The horror elements are there, and if there’s sex and romance it is definitely on the edgy Sex and the City vibe as opposed to “Romance,” but to me it’s really about Simon and his personal journey. I was just trying to stay true to the main character, Simon, and trying to imagine that I was in his place and situation. All along, I wanted the focus to be on Simon’s relationships and how this was affecting him personally.

PS: Both The Pack and your previous novel, Panic Attack, had a lot to do with the financial and emotional pressures of the modern nuclear family, as opposed to the singles scene as presented in The Follower. Was this shift deliberate?

JS: I wrote an earlier novel, Nothing Personal, which was also about a family with a kid, but I wanted to take The Pack in a different direction than my recent crime fiction. So, I was trying to move away from Panic Attack. After I wrote Lights Out, The Follower and Panic Attack all in order I wanted to do something a little different, more of a post-9/11 type of suspense novel where it starts off in the real world and where weirdness slowly intrudes, but with very real, viable characters. That’s what I was going for here. I don’t think I’m tying to write “family” novels, but I see that now that you point it out.

PS: Like in many of your novels, New York City plays a crucial role in The Pack. How did you pick the locations?

JS: I try to find the neighborhood that would be best to tell the story. So, for Simon, he starts out as a high-paid advertising executive, so I knew I had to put him in a somewhat affluent area. I chose 89th and Columbus because I used to live there on that corner, so I knew it very well from my own experience. On a side note, the building that Martin Scorsese filmed in Taxi Driver—where Robert DeNiro’s character lived and did the famous “You Talkin’ To Me?” scene—was on 89th and Columbus, the same corner where I lived, but it’s a different building now. It was a tenement, but it was torn down. The condo where I lived there in my 20s is still there. So, I knew the building very well. I’ve done that before—I’ll choose a location because I have personally spent a lot of time there. It saves having to do research, but it also keeps it personal for me in my head. I felt like I wanted the reader to identify with Simon, and I wanted to pretend I was like Simon in that situation, so thinking in an area that’s familiar to me helped me accomplish that as a writer.

PS: What was the biggest challenge in writing The Pack?

JS: The biggest challenge was that, aside from my graphic novel The Chill, I had never written any prose fiction that was urban fantasy or paranormal in any way. I’ve always written in a really realistic world. So, I didn’t want to get psyched-out by the conventions of the genre, or by people’s expectations of what happens in a novel where there are werewolves. It’s also the first in a projected series, so I had to think about those issues in the back of my mind, like how the books will move forward in the future. In the end, what I realized was that even in crime fiction there are certain conventions you have to stick to, and these are just a new set of rules. So, when I thought of it that way, it just became clear in my own head. I approached this like writing one of my usual books, and it starts off with a situation that might have been in one of my earlier novels (Cold Caller, for example), and I just took it in a completely different direction.

PS: Are there any updates about Bret Easton Ellis’ miniseries adaptation of The Follower?

JS: That is currently at Starz, and he’s written three episodes at this point. That’s the latest news.

PS: Have you ever tried adapting your own work for movies or television?

JS: I wrote the screenplay for my first book, Cold Caller, which is in development in Australia. It was fully financed by the South Australian Film Corporation. I’m still working on that, penning a new draft currently. I’m always interested in the idea of adapting my own work but, if there’s some situation like with Bret adapting The Follower, it could just be more interesting to have someone else adapt it. They could have a new perspective on the story, which could be better than me doing it myself.

PS: Do you have any particular writing rituals you follow? I know Fredric Brown always used to work out plots by taking long bus trips.

JS: When I get stuck, I find the answer when I’m working out, if I’m running or biking, or when I’m under a hot shower. Maybe it’s something about relaxing. I write everything by computer. Sometimes I’ll print out pages and edit by hand, but usually I’ll just write on the screen. I think the biggest challenge these days is not getting too distracted by the Internet. It’s really about creating a block of time for yourself, and I think it is becoming harder and harder. That’s the big challenge: the discipline not just to do the work, but to be able to block out distractions.

PS: Jim Thompson didn’t have to deal with Facebook and blogging.

JS: That’s true. Publishers tells us we have to do all this stuff—like Tweets, blogs—but they’re a major distraction. I think it was Thompson who used to lock himself in a hotel room sometimes to finish a book. It could be Charles Williams or someone else. That used to happen with old pulp writers: they’d have a deadline, lock themselves in a hotel room for a few days, probably getting drunk, but finishing the book nonetheless. I think there are always distractions. Those guys probably felt distracted, too. Today, you can still go to a cabin in the woods to write the book, but you have to figure a way out to block out your cell phone and the Internet.

PS: I read that Cold Caller was adapted into a radio play in Germany. What can you tell us about that?

JS: It was produced when the novel first came out. It did pretty well, and they bring it back every couple of years. I don’t speak German, but I’ve been over there a bunch of times for my books and they usually have me do readings with an actor. The actor will read in German and I’ll read in English. The radio play was cool, though, it was a full production with a full cast. Of course, I couldn’t really understand it myself.

PS: Any chance that you and Ken Bruen will pick up your Hard Case Crime series and write a fourth book (after Bust, Slide, and The M.A.X.)?

JS: Ken and I started a fourth book set in Sweden. We wanted to capitalize on the Swedish craze in crime fiction (I’m being semi-sarcastic when I say that), and we just thought it would be funny if we put our character Max in Sweden. We wrote about four chapters, but then we just haven’t gone back to it lately, so I don’t know. [Since this interview, they have collaborated on a fourth novel in the series, Pimp, from 2016.]

PS: Any advice for young writers just starting out?

JS: Just figure out how you’re going to block out the Internet. I think it’s really important to have a ritual of writing, like a word count, and stick to it everyday. Just get into the groove of being a writer. Whether the book sells or not, just get into the groove of finishing books. With your first novel, expect that it won’t be great, but you just want to finish it for the sake of knowing you finished a novel, then immediately go onto the next one. You’ll hate your book when you finish it, which is very common, but you’ll start to realize there’s quality there, and then you’ll start to develop your voice. It’s a process. Some writers expect that it will happen really quickly, and it rarely does. It can only really develop through trial and error. From my own experience, it takes writing a few things to see for yourself what is unique about your voice and why it stands out.