“The Kid I Killed Last Night and Other Stories: Day Keene in the Detective Pulps, Vol. #7,” edited by David Laurence Wilson (Ramble House, 2021) 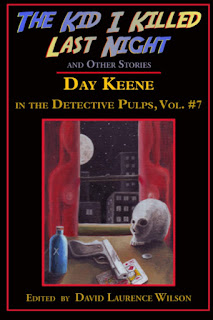 I'm ecstatic over the seventh and most recent volume in Ramble House’s series of Day Keene’s short stories is The Kid I Killed Last Night and Other Stories: Day Keene in the Detective Pulps, Vol. #7 (2021). Expertly compiled, edited, and introduced by David Laurence Wilson, this collection is one of the most interesting and illuminating volumes released yet. Devoted to Keene’s earliest stories published under his real name Gunard Hjertstedt and later tales published under pen names (John Corbett and Donald King), The Kid I Killed Last Night sheds light on the more obscure areas of Keene’s pulp career. Fans of the author will delight in being able to access such rarities, and newcomers will hopefully appreciate the author’s wit and crackerjack plots. Early or late, real name or pen name, Keene was a master of the short story, and Ramble House and David Laurence Wilson deserve applause (and lots of orders) for keeping the author’s legacy alive.

Arranged in chronological order, the book begins with Keene’s first published tale “Ashes” (10 Story Book, August 1930), about a racketeer who pays to have his wife “disappear” and then returns home to find that the hired hand absconded with the money and the lady for himself. This is the first of several revenge tales in the collection. What’s most interesting about Wilson’s selection of stories and arrangement is that one not only sees the growth of Keene as a writer, but also the themes and motifs that unify his career, and how he reworks them as he matures as a writer. “Ashes” is a short yarn that mainly works because of its brevity; “Homicidal Journey” (Detective Tales, November 1945) revisits the concept of a husband who wants to murder his wife, however a Dickensian twist gives the protagonist, a returning WWII vet, newfound empathy for his wife, left at home to bear her burdens alone during the war. “Who Dies Last?” (New Detective Magazine, September 1949) further evolves the concept by switching gender perspectives: this time it is a wife who wants revenge on a two-timing husband.

Veterans also appear in “Johnny’s-on-the-Spot!” (Detective Tales, June 1945), about a former mob hitman who escaped New York to a small, rural town and rebuilt his life as a bank president. Coming home from the war, he finds that his past has caught up with him—a double-crossing mobster wants to frame him, and a cop wants to arrest him. And in “They Gave Him a Badge!” (Detective Tales, January 1946), veteran Stan Martin is given the job of sheriff because of his war record and in hopes that he’ll stay silent on certain corrupt matters—but Martin won’t stay quiet when political boss Mal Hunt tries to cover up a murder as a suicide.

Among Keene’s most distinctive characteristics is his eccentric sense of humor, which is on full display in “Mr. Beaver, D.A.” (Detective Fiction Weekly, January 30, 1932), in which a recently disbarred doctor gets revenge on the man who he thinks framed him, only to have his seemingly-perfect murder fouled up by the titular woodland creature. Another early tale, “I Hadda Hunch (Detective Fiction Weekly, November 21, 1931),” features Keene’s earliest series characters, the detective firm McPherson, Swanson and McCoy Operative Bureau; here, they’re off to Panama to find a cashier who ran off with a few hundred thousand dollars, and wind up in a wonderfully slapstick bar fight with flying bottles and knives.

One of the sub-genres in which Keene specialized was the “shudder pulp,” a mystery that begins as supernatural but is revealed to be rational. In “Dames Are Poison!” (Detective Tales, February 1945), the owner of a failing bar comes up with a winning attraction, “The Kiss of Death Girl”—the only problem is even the girl thinks the curse is real. Another “shudder pulp” tale is “Hound of Hell” (Dime Mystery Magazine, February 1946), in which a stock broker thinks he is being haunted by the ghost of his partner who he pushed out of a window on Black Friday in 1929.

Keene’s knack for twist endings is evident in several stories, including “Grave in Bloom” (Detective Tales, September 1945), in which a man murders his brother (who plans to will his estate to charity), but nature won’t stay quiet. Another favorite is  “Who Dies There?” (New Detective Magazine, January 1950), in which a sheriff conceives a clever way to find who ran off with $225K after a con artist is murdered. “As conscientious a fisherman as he was officer of the law, bait was a sore spot with him. It hurt the artist in him to watch some well-meaning fool bait for redfish with cut-bait in water where they'd only hit fiddler crabs, or vice versa. Fishing, in his opinion, was a science. A man finding himself in Ybor City might order chicken and yellow rice. But the same man at Steve's Rustic Inn would or­der steak. It was the same with fish. To catch a fish, you had to give it the partic­ular type of bait it wanted.”

Keene wasn’t all laughs, though. His more serious crime stories include the Ozarks moonshine noir “Murder Mountain” (Detective Fiction Weekly, April 14, 1932): ”One kills for one's kin, or one kills one's kin—it is a subject for inter-tribal solution, and concerns only the parties involved.” And the titular tale, “The Kid I Killed Last Night” (New Detective Magazine, September 1949) is a chilling story of vigilantism, in which a police sergeant has a change of heart after killing a teenager in the course of his duty, and decides to take down the corrupt elements running crime and poisoning his town.

Overall, The Kid I Killed Last Night and Other Stories is a stellar collection of pulp stories that displays the style, wit, and personality of Keene, as well as the author’s growth. A must-read for fans of mystery pulps.