"Love Like Bleeding Out With An Empty Gun In Your Hand" by Stephen J. Golds (2021) 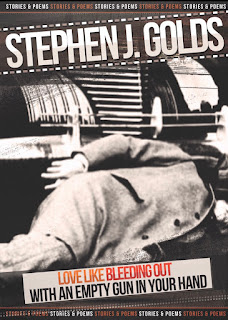 Nothing ever lasts in Stephen J. Golds’s world—not the good, and not the bad.

In Golds’s hard-hitting collection of noir-influenced poetry and prose, Love Like Bleeding Out With An Empty Gun In Your Hand, there’s a lot of past, not much present, and even less future. Characters look back and see what’s better left behind; they look around and don’t like what they see; and they look ahead but don’t see much of anything. Yet somehow, Golds manages to be both a romantic and a nihilist at the same time—and that’s as good as definition of noir as I can think of.

Read more »
Posted by Cullen Gallagher at 9:52 AM No comments:

Email ThisBlogThis!Share to TwitterShare to FacebookShare to Pinterest
Labels: Close to the Bone, Stephen J. Golds 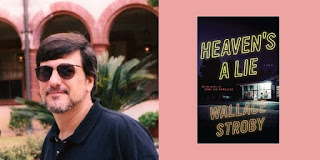 I've long been a fan of Wallace Stroby's crime novels, especially his Crissa Stone series, but his latest is my new favorite. In design, Heaven's a Lie reads like something straight out of Gold Medal from the 1950s, but in feeling and tone it is completely modern, and deeply tied to the present moment. The main character is Joette, a woman who was laid off from her bank teller job when the bank downsized. Now she works a day-shift at a decaying motel during the off-season in order to pay for her trailer and support her dying mother. But that's all backstory you learn later. Stroby kick-starts the action with the first sentence of the book. A car turns over in front of the motel. Joette rushes to help rescue the driver. Inside the open trunk, she sees a bag of cash. She takes it. And, of course, the rightful owner quickly figures out she has it and wants it back. Trouble is, Joette's got nothing left to lose and is determined to keep the cash.

One of Stroby's strongest abilities is character development. He eschews archetype for realistic people made of flesh-and-blood, with urgent and relatable motivations, and who—when pushed—surprise not only those around them, but also themselves. And Heaven's a Lie is a book in which characters frequently surprise themselves. Whether it is Joette recognizing her boldness and recklessness, or Travis—the sadistic drug dealer—acknowledging his limitations and powerlessness, the cast of Heaven's a Lie face life-altering and disturbing self-realizations.

I loved Heaven's a Lie—a tightly-knit chamber noir filled with melancholy and heartache set against a backdrop of America's struggling economy and the destructive wake of gentrification.

On the occasion of the book's release, Stroby was kind enough to speak with me about the writing process.

Read the full interview, "Wallace Stroby on Life, Death, and Noir on the Jersey Shore," at CrimeReads.

Posted by Cullen Gallagher at 10:09 AM No comments: