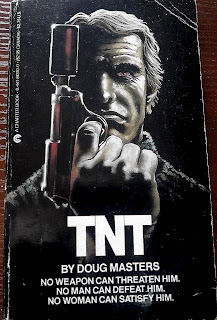 TNT is a fitting name for a book that blasts the whole Men’s Adventure genre into another stratosphere. A bizarre fusion of James Bond and Maquis de Sade with a nuclear-age twist, TNT follows a rogue reporter who has been turned into a killing and sex machine after being exposed to radiation. The novel’s Sadean digressions into torture and exploitation are so surreal and extreme that it surpasses the boundaries and intentions of most Men’s Adventure novels that I’ve read, and would almost be considered pornographic if not for the ironically restrained prose of the novel, which feels strangely detached and matter-of-fact. As Joe Kenney describes, the writing is “almost puritan in its descriptions: cursing is kept to a minimum, [and] there’s not much gore.”

First appearing in English in 1985 from Charter Books as by “Doug Masters” and translated by Victoria Reiter, TNT was originally published in France as Les sept cercles in 1978 as by Michael Borgia (a collective pseudonym for Loup Durand and Pierre Rey); it was later adapted into a graphic novel in 1989 with art by Christian Denayer. TNT is structured much like a serial, perhaps an homage to classic French mystery serials like Fantomas by Marcel Allain and Pierre Souvestre, or Louis Feuillade’s silent film serials Judex, Les vampires, and his own adaptation of Fantomas. Each chapter attempts to push the bounds of good taste more than the previous, to be more aberrant and more outlandish.

TNT begins with a nuclear test on a supposedly deserted island in the Pacific. Journalist Tony Nicholas Twin, nickname TNT, had snuck onto the island, however, and found himself victim to the bomb. Miraculously, he survived. When the military studies his body, they discover that he’s developed many side effects: he can breathe for a long time underwater, he can see in the dark, he heals from wounds quickly, and he has an inexhaustible sex drive. Arnold Benedict wants TNT released so he can assassinate an Italian scientist, Michelangelo Piran, who threatens to upend the world’s petroleum market, but TNT wants to head to Ireland because of “October,” a word he keeps repeating in his sleep. 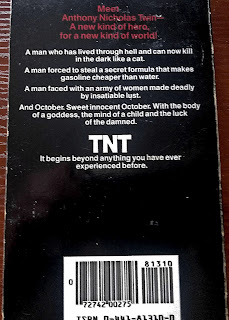 If you pick up the book, you’ll quickly decide for yourself whether this is offensive trash, or whether it is a bizarre odyssey of the obscene. Personally, I think it works as both at the same level and at the same time. Coming at the tail end of the 1970s, its extreme content fits in line with contemporaneous cultural trends in literature and cinema—exploitation movies, Alain Robbe-Grillet, Pier Paolo Pasolini, and Giallos. The book’s shameless hedonism also recalls the Japanese trend of “erotic grotesque nonsense,” described by Jim Reichert as a “cultural phenomenon that devoted itself to explorations of the deviant, the bizarre, and the ridiculous,” and which can be seen in the literary works of Rampo and movies like Yasuzo Masumura’s Blind Beast.

The more eccentric moments of the novel linger as its finest touches, such as an extended section from the perspective of a crab, which Keeney also singles out on his blog, Glorious Trash. “It was ten fifty-four, but the crab, a brownish Gecarcinus with long antennae, didn’t give a damn.” Or the raid on Piran’s compound, which begins with lacing the guards’ water supply with LSD and then dropping LSD bombs on them, and ends with a hallucinogenic torture maze inspired by Dante’s Inferno. Other moments linger for much more disturbing reasons, such as when TNT is forced to have sex with a fifteen year old girl who suck on the fingers of a severed hand, its flesh black with rot. That image challenges anything from horror cinema at the time. Such a scene is intended to shock readers, and it hasn't lost that power in the passing decades.

I went into TNT not knowing much about the book and expecting a straight-ahead action novel. What I got, instead, was something much different and much more controversial. More absurdist than satirical, TNT is a truly outlandish and singular take on the Men’s Adventure genre. Not knowing who is going to read this review, it’s hard to recommend or not recommend it in good conscience, but I hope by this point you might have some sort of an idea of Loup Durand and Pierre Rey’s novel and can decide for yourself.

Posted by Cullen Gallagher at 7:45 AM