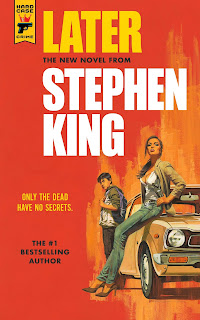 Later, Stephen King’s third crime novel published by Hard Case Crime, is a masterful fusion of melancholic macabre and grim fantasy that recalls past masters of the crime/horror hybrid like Fredric Brown or Joel Townsley Rogers’s The Red Right Hand. There’s also an air of wonderment that permeates the entire novel and which reminds of the crime stories of Ray Bradbury (collected by Hard Case last year). “I thought of asking her if it freaked her out to look up at night and see the stars and know they go on forever and ever, but didn’t bother. I just said no. You get used to marvelous things. You take them for granted. You can try not to, but you do. There’s too much wonder, that’s all. It’s everywhere.” Horror, in Later, can be frightening, but it can also be magical and fantastic. To borrow the title of a Sergio Martino movie, Stephen King explores all the colors of the dark in Later, a playful, gripping novel that’s as moving as it is chilling.

Jamie Conklin was only a child when he realized that he could see dead people—which, he reminds, is nothing like in The Sixth Sense. They appear near the site of their death, or a place they loved to spend time while they were alive, and look exactly as they did the moment of their death. After a while, their ghost, too, fades away, but while they’re still here, they can’t tell a lie. It’s a secret that Jamie has only shared with his mother, Tia, who is trying to salvage the family literary agency after the financial blow of the 2008 crash, but when she tells her partner, a crooked NYPD cop named Liz, Jamie’s connection with the afterlife gets darker and more intense than he would like.

It’s clear that Stephen King had a blast writing Later. From the opening page, King’s narrator taunts the reader with the word “later”—like a tantalizing portent, reminding us that there’s always more to the story. Conklin’s first-person narration, like Mattie Ross in Charles Portis’s True Grit, allows King to tell the story not like a novelist, but in a more intimate manner. Conklin often gets ahead of himself, slipping details before they’re ready before realizing he needs to slow down and not get ahead of himself. But it’s these slips that give us hints of what is to come and keep us hooked.

Later, like King’s The Colorado Kid, is not a conventional crime novel, nor does it resemble the many fabulous hardboiled and noir thrillers that Hard Case Crime normally publishes. Instead, Later is an experimental novel, mixing a tender coming-of-age narrative about a son and his single mom and her drug-addicted lover with a supernatural ghost story and a violent tale of drug running, kidnapping, and murder. It’s like three novels in one, and it takes a master writer like Stephen King to seamlessly fuse them all together.