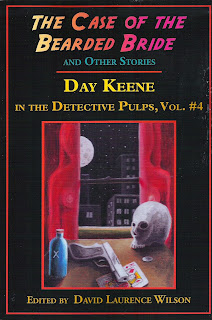 Ramble House's The Case of the Bearded Bride: Day Keene in the Detective Pulps, Vol. #4 was edited and introduced by scholar David Laurence Wilson. The selection reflects the depth and comprehensiveness of his research, comprising Keene's earliest stories under his real name, Gunard Hjertstedt, as well as several from the 1940s under the pen name "John Corbett." None of these tales were the sorts of novelettes that would get their titles printed in large, sweeping, bold red text on the front covers of magazines. Instead, these stories represent two different stages of Keene's career as a writer. The Hjertstedt stories are when he was still developing a voice, written in the 1930s while he was still mainly producing radio dramas for broadcast. The Corbett stories, on the other hand, were pseudonymous works meant to fill out the pages of issues where a story under his real name was given more prominence. It's a fascinating combination that focuses on the more obscured and less visible aspects of Keene's output, but that sort of attention to detail is what I value and appreciate from Wilson.

As usual, Wilson's introduction is an insightful glimpse into Keene's style. This passage, in particular, stood out to me: "Keene was the master of constructing a scene, of laying out the pacing and perspectives of his stories like a well-built house. Even in his most convoluted exercises, however implausible, Keene did not cheat. He followed his own rules. At his best he was mysterious and sublime, clever if not profound, and all the time he was coloring within the lines."

The stories collected here provide fascinating insight into Keene's bibliography. "Excuse My Crust," from 1931, is notable for being an early example of his wake-up-to-trouble plot—in this case, a pulp writer awakens in a basement to discover he was robbed. "Pure and Simple" and "The Case of the Bearded Bride" are early examples of Keene developing series characters, here it is the private eye firm of McPherson, McCreedy and McCoy. Keene's reliance on stereotype and phonetic dialogue in "Tong Boy Goes to War" hasn't aged well, but the scope of the story is quite interesting, about a Chinese immigrant's family and their rise in American society to becoming business owners, and then entering the military with ambitions of being an officer.

My favorite stories are the later Corbett stories which feature unexpectedly nasty twist endings. In "You Only Live Twice," the justice served isn't necessarily legal. In "Dig Deep, Brother," an overlooked detail spoils a "perfect crime." And especially "This Way Out," which has a very grim, macabre finale. On the lighter side of things is "Setup in 819," a delightful tale in which sometimes crime does pay off. 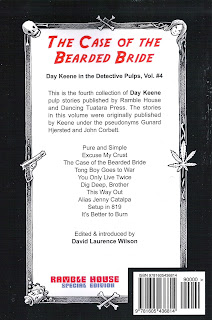 Synopses of stories included below:

"Pure and Simple" - as by Gunard Hjertstedt - Detective Fiction Weekly, October 31, 1931 - The firm of McPherson, McCreedy and McCoy, Detectives Extraordinary, is engaged to fly from New York to Hawaii to look into the death of Dolores Delite, whose heart was pierced by something long and narrow. Her ex-husband, a photographer, was the last to see her alive, and an actress named Adore Dorado has been arrested for the murder, which is holding up production on a movie. The movie's producer has hired the detectives to exonerate the star so the movie can continue.

"Excuse My Crust" - as by Gunard Hjertstedt - Detective Fiction Weekly, December 5, 1931 - A pulp writer wakes up in a strange basement having lost his shirt—literally and figurateively. His shirt is missing, as is the $150 he had in his pants. He figures a bartender drugged him and rolled him last night, only he can't prove it. So, he decides to enact a pulp-inspired scheme of his own in order to get revenge.

"The Case of the Bearded Bride" - as by Gunard Hjertstedt - Clues Detective Stories, May, 1935 - McPherson, McCreedy & McCoy are called to the estate of Israel Harwood for a classic locked room-style mystery. The heirs of millionaire Israel Harwood have all gathered at his estate for a wedding, when he is found strangled in a room locked from the inside, and only he had the key.

"Tong Boy Goes to War" - as by John Corbett - Detective Tales, April 1942 - While working at his laundromat in New York, Ah Sing gets into a fight with a customer. Fearing he killed the man, Ah Sing flees and joins the military. Later, he sees the same man under a different name on his military base, and Ah Sing suspects the man might not be who he says he is.

"You Only Live Twice" - as by John Corbett - Detective Tales, May 1945 - Twenty-four years ago, Jim Hooper held up a bank for $20,000, gave the money to the girl who was driving the getaway car, and then, feeling ashamed of his crime, he headed before Mexico on his own, and never saw the money or the girl again. Now, he has decided to pay the bank back. When he arrives with the cash, however, he doesn't get the reception that he expected.

"Dig Deep, Brother" - as by John Corbett - Detective Tales, October 1945 - After Jim Mears went off to war, Carl Morgan took up with his wife, Claire, and the two of them sold his ranch and subdivided his land. Now Jim is coming home from the war, and they expect he'll be mad enough to kill them.

"This Way Out" - as by John Corbett - Dime Mystery, May 1946 - Joe Cortez has twenty-four hours to pay back $40,000 to Connors—or else! A former department story live-dummy, he devises a plan to rob the bank, then fake his own death, and escape with the money and his girlfriend.

"Alias Jenny Catalpa" - as by John Corbett - Detective Tales, January 1948 - The fates of two strangers,  a mother running away with her infant and a gangster who just broke out of jail, cross one fateful evening outside of a Chicago restaurant.

"Setup in 819" - as by John Corbett - Detective Tales, May 1948 - An aging hotel detective knows his days are numbered, so he plans how to get revenge on his employer while also securing enough money so he and a young couple can buy farms in Georgia and retire.

"It’s Better to Burn" - as by John Corbett - New Detective Magazine, March 1950 - After crooked insurance investigator E. Osmond Peabody is released from San Quentin, he sets out to find Gruzik, a shady jewelry salesman suspected of stealing a $200,000 diamond necklace that was never recovered. Peabody is determined to find the necklace for himself at any cost.
at November 04, 2020