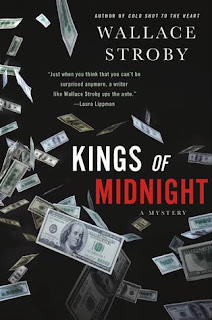 Kings of Midnight (2012) kicks off with a heist destined for the Hall of Fame. The setup may be simple—knocking over an ATM with a tractor, followed by a fast getaway into the woods—but the scene's power lies in Wallace Stroby's uncannily exact imagery, precise language, and narrative credibility. Stroby's depiction of heists is so believable you almost wonder if writing is just a sideline for him. The scene recalls those meticulously choreographed centerpieces from films like Jules Dassin's Rififi (1955) and Hubert Cornfield's Plunder Road (1957), in which minute details of movement are amplified to anxiety-inducing extremes. So much tension, but so little happening. Economy of language has been a key element of crime fiction since the days of Dashiell Hammett, but Stroby makes it feels fresh and vital again. He doesn't rely on hardboiled clichés or tough guy lingo. Kings of Midnight is, in large part, a quiet book when it comes to dialogue. The attitude is all in the action—and here, actions speaks louder than words.

Kings of Midnight is a follow-up to Cold Shot to the Heart (2011), which first introduced career criminal Crissa Stone. Like Richard Stark's Parker before her, Crissa is a stone-cold thief who finds redemption in professionalism. But unlike Parker, Crissa is no existential enigma. Stroby gives us just enough fleeting glimpses of her personal life—a lover behind bars in Texas, a daughter who lives with relatives and doesn't know her real mother's identity—to lend her actions a sincere urgency, and to explain why, at this point, her job is her whole life. She lives for her family, even if she can't see them, and raising this money is the only way she can connect with them, even if they don't receive it directly. Some of the money goes to bribing officials to get her lover released from jail, and the rest goes to her daughter, either through her caretakers or a secret account.

Stroby grounded Cold Shot to the Heart in realism, avoiding excess, paring phrases down to their utmost efficiency—and Kings of Midnight takes this aesthetic even further, while also amping up the excitement. The novel begins with two parallel stories, which eventually converge. There's Crissa, who returns to New York City to make some quick, clean cash after the ATM score goes sour. Then there's Benny Roth, an old-time mobster turned stool pigeon who got sick of living under witness protection and walked away from everything, taking a job as a dishwasher. When a fellow mobster from Benny's past shows up and demands to know where he stashed the legendary $5 million from a 1978 Lufthansa heist, the retiree is thrown back into action. Taking it on the lam with his much younger girlfriend, he heads back to New York, hoping to get to the loot before his rivals do. He'll need a pro for that: someone desperate enough to team up with an old man not at the top of his game and go for a big score that might not even exist... 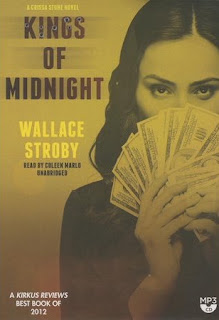 Kings of Midnight is remarkable for its stylistic rigor. There's not a word out of place, no detail that isn't essential to the story. Some writers might be tempted to retreat into the minds of their characters, spelling out their every thought and feeling. Not Stroby. For him, all the psychology is implicit in their movement and dialogue. Crissa's lover and daughter are barely mentioned in this sequel, but their absence provides an unspoken motivation for all her decisions, and a foundation for our sympathy. This is what hard-boiled writing should be. No silly posturing, just tough characters making difficult choices and surviving in a ruthless world.

At their best, crime novels provide more than the voyeuristic pleasure of looking in on a lifestyle that us law-abiding citizens will never know first-hand: they offer a refractive glance back on our own world. In her own way, Crissa Stone is a modern-day hero for an America still recovering from the economic collapse. There's an honesty and integrity to her work ethic that separates her from the fold. The "corporate" types screw her over time and again, judges and lawyers can't be trusted, and the panic has even infected her own milieu. Old crews aren't operating together, the scores are more feeble, the interpersonal dynamics more tense, and there's a general feeling of depression and hopelessness. As Stroby writes of Crissa:

"A long string of bad luck. Events pushing her along as if she had no control over them, no choice, her fate already decided. All of it getting away from her before she could fix it. Everything going to hell."

Or, an alternate, more succinct explanation courtesy of Benny: "Everything was fucked."

Those three words are as succinct a definition of noir as you're gonna get.

Since Kings of Midnight, Stroby has published two more Crissa Stone novels, Shoot the Woman First (2013) and The Devil's Share (2015).

This review was originally published March 31, 2012 by the Los Angeles Review of Books. It appears here in a revised version.