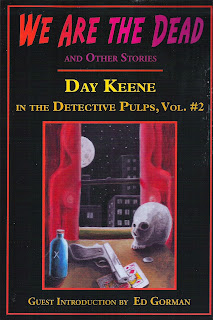 We Are the Dead is Ramble House's second volume of Day Keene's pulp fiction. This volume is particularly special because of its introduction by the late Ed Gorman, one of my favorite novelists. Ed was also an incredible critic and historian, and he had the remarkable ability to discuss literature in a way that was profound and insightful without being overly complicated. I have re-read his intro three or four times, and it has that particular cadence that all of his writing has, an ineffable and invisible quality but which is always present. It's a voice that is unmistakably his own. I would have treasured this volume for his intro alone, but the stories are quite remarkable too, and the combination of them makes this an impressive volume all around.

Three of Keene's series characters appear here. The former pugilist-turned-pharmacist Doc Egg is represented by "We Are the Dead" and "If the Coffin Fits," which are great representations of the Dime Mystery-style of pulp story that Keene excelled in writing. What begin as a supernatural ghost stories are eventually revealed to be not supernatural at all. The design appealed to some of Keene's best qualities as a writer, a knack for strong, vivid opening scenes, as well as his gift for nightmarish logic and endurance tests for his characters. Private eye Matt Mercer appears in "Thirteen Must Die!" and police officer Herman "The Great" Stone appears in "The Corpse They Couldn't Kill."

One of my favorite stories, and one of Keene's strongest that I've read thus far, is "Corpses Come in Pairs," a nasty piece of fiction with a wicked twist at the end. It's about two murderers on the run to Mexico, neither of whom can trust each other, and each of whom has a plan to outwit the other one. "Kitten on the Corpse" is one of Keene's more eccentric tales, in which a missing cat is the missing witness in a murder case. And "A Slight Mistake in Corpses" is perhaps the most iconic Keene-ian setup of all: a man wakes up in a strange bed next to a corpse with no memory of murdering her. It's a plot design that Keene would return to time and again, particularly in his novels, and even makes another appearance here in the story "Thirteen Must Die!" 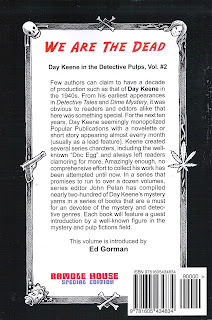 "If the Coffin Fits" is of particular interest to Keene fans because it's title was re-used for a 1952 Graphic paperback original, however Keene didn't keep the plot at all. The novel is about a private eye (Tom Doyle, another of Keene's series characters) caught in a power struggle between two factions in a gambling town. The short story features a different series character, Doc Egg, investigating a seemingly supernatural death.

"The Corpse They Couldn't Kill" is also of note because it's plot was cannibalized for two different novels: the parts about businessmen disappearing was reused in The Dangling Carrot (1955), while the bit about the detective's gun and shield being stolen later became part of Mrs. Homicide (1953).

Overall, We Are the Dead is another terrific collection of Keene's stories. I'm grateful to Ramble House for their efforts to make his pulp stories more widely available, it's an important part of Keene's own legacy that has been obscured for far too long, and an important part of crime fiction history since Keene was such a prominent contributor to the pulp era.

Here are longer synopses for all the stories:

"We Are the Dead" - Dime Mystery, May 1947 - Sam Salter, who made millions manufacturing phony munitions during the war, begins hearing voices, ghosts of the men who died because of his scam. After he is found dead in his hotel, the police suspect Doc Egg, who prescribed the bromide Salter had the night he was poisoned. Doc suspects Salter's new bride, Renée, while Salter's partners suspect that it was Doc who not only killed Salter, but also stole the ten million dollars from their bank deposit box.

"Corpses Come in Pairs" - Detective Tales, April 1944 - Obler and Alverde, the former a Hitler youth and the latter a Spanish immigrant, are saboteurs on the run. After breaking out of federal custody, they robbed a bank and are on their way to Mexico. Stopping at a gas station, they pretend to be soldiers on leave from San Antonio. But after the attendant recognizes them, Obler and Alverde find themselves committing more crimes and concealing them. Can they keep it up before the law catches up with them?

"Kitten on the Corpse" - Detective Tales, April 1946 - A missing cat and a missing husband suspecting of murdering his ex-wife collide one snowy week in Chicago. When the missing husband, Gunderson, is found dead, an apparent suicide, homicide detective Herman Stone investigates and believes that it is murder, and that the missing cat might be the only witness.

"A Slight Mistake in Corpses" - Detective Tales, May 1942 -  First National Bank of Durber Falls, Iowa teller Anson Merridith wakes up in a Chicago hotel room in bed, hungover, and next to a dead blonde with $20,000 stolen from his bank on the dresser nearby. He claims he was framed by his boss, Glade Williams, but when the cops go to nab Williams, he claims he has no memory and is also being framed. Two suspects claiming the other has framed them—it'll take the Chicago homicide division and the Durber Falls sheriff's department to unravel this mystery.

"Thirteen Must Die!" - Detective Tales, July 1948 - Matt Mercer is called down to the Louisiana bayou town of Crossville to protect jurors from the ghost of a man they condemned years before. In 1941, then-Sheriff Arnold woke up in a room with a dead girl and $7500 found in a lean-to behind his house. Convicted of murder and graft, he was sentenced to prison. Before he escaped and enlisted in WWII using a fake name, he vowed revenge on the jurors. When Arnold was killed in combat, the jurors thought they were free, but four have been killed so far, and the surviving nine expect they are next.

"If the Coffin Fits" - Dime Mystery, March 1945 - Phil Morton, a writer of books debunking phony spiritualists and occult myths, is murdered by a man whose corpse he saw earlier that day. When he's found by the police, there are two puncture wounds in his neck, and all his blood has been drained. Later that night, the missing corpse reappears in the morgue and attacks the embalmer. New York pharmacist Doc Egg is asked to untangle this murder that defies medical possibility.

"The Corpse They Couldn't Kill" - Detective Tales, January 1945 - Several prominent businessmen—and their savings—are disappearing from Chicago, leaving signs of a struggle, but no corpse. The latest, J. Peabody Simms, also left behind a perfect hand in bridge. Homicide detective Herman "The Great" Stone thinks there's only one reason a man would do that—a woman.