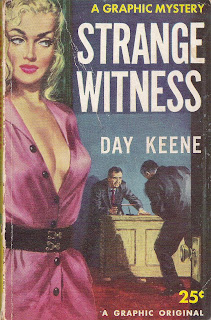 Day Keene's Strange Witness was originally published by Graphic in 1953, the third of five novels he would write for the short-lived paperback house. The story is a variation on the archetypal Keene plot about a wrongly-accused man dodging cops and gangsters in order to prove his innocence, and told with the author's usual full-tilt pacing with a couple twists thrown in to surprise even his most devoted fans.

Hart Jackson used to have a successful career as an emcee and ventriloquist. Then he took the fall for his brother, who was set up for the murder of Helene, a singer at a nightclub. After serving 7 years of a 20-year sentence, he's out on parole—and he wants revenge against Flip Evans, the club owner who put the frame in place. After hocking his watch for a gun, Hart goes to a bar, where he is approached by blonde woman he's never seen before who says her name is Thelma Winston, she wants to marry him, and will give him $10,000 plus evidence to put Evans behind bars. But as soon as they are married, Thelma is gunned down. The cops want Jackson for murder, and the gangsters want to know what Thelma told him. Her dying words were something about Olga and a hotel room—but Jackson doesn't know what they mean, only that his life and proving his innocence depends on it.

Strange Witness is based on one of Keene's earlier pulp story, "The Charlie McCarthy Murders" (Detective Tales, March 1942). The story is pretty much the same, beginning with Hart leaving jail, Thelma's proposal, her murder, and the subsequent dual-chase as the cops go after him for murder and the gangsters want Olga. The events are more compressed in the story, and Olga is not so quick to tell Hart about the murder she witnessed. 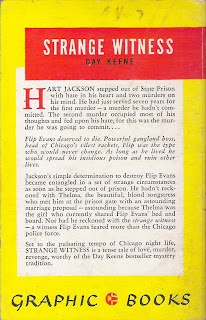 As is typical of Keene, Strange Witness finds Keene reworking plot elements that appear in other books. A man accused of a murder he didn't commit and the dual tension of eluding both cops and gangsters are common structural elements in Keene's work. Death House Doll, which would be published one year later, features two elements from Strange Witness, a brother who was killed in action in Korea and someone taking the fall for their sibling. And like many of Keene's books, this one is set in Chicago, the author's hometown, where he obviously feels very familiar with the setting, how the city is laid out, the different neighborhoods, and how to navigate it. Keene's sense of place is never as strong as when he uses Chicago, and Strange Witness is strong on atmosphere and location detail.

Another characteristic Keene quality is that his main character is an everyperson that the reader can identify with, and not some extraordinary action hero. Here, the character muses on his over averageness: "He'd never posed as a mental genius. So he'd been a high-priced M.C. and a ventriloquist. That came under the heading of talent. All he was was a regular Joe, not any smarter than the average guy on the street, not half as smart as some." Then, a few pages later, after he makes a mistake and finds himself in even deeper trouble: "He wasn't even as smart as the average guy on the street." By keeping the protagonist on the level of the reader, it makes the challenges all the more empathetic and relatable: the main character might be tough, but he takes his share of punches and suffers for it, and he pieces together the mystery one clue at a time right along with the reader. Despite the non-stop pacing, the mystery is solved through deduction and not violence. Hart doesn't use his fists to get information, but pieces clues together. The violence is almost an obstacle for him to overcome. 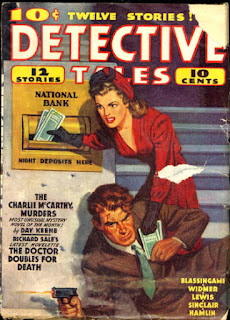 What is very unique to this book is not the "strange witness" of the title, but a far stranger protagonist—a ventriloquist. It's a profession that offers very unique possibilities for plot twists that would have been a strong selling point in the pulps, and indeed Keene makes very creative use of Jackson's vocal talents in Strange Witness to get Hart out of jams.

One thing that is common among all of Keene's novels is the pacing. Keene writes like a lit fuse that can't be put out. This one goes down almost until the very last line—a couple pages before the end, I even wondered if my copy was missing pages. It wasn't—and Keene's tidying up is impressive.

Overall, Strange Witness an excellent Keene novel that is emblematic of the writer's strengths and recurring motifs.