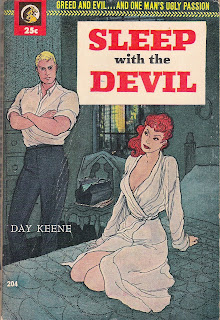 A dark fable about a duplicitous Bible salesman with nothing but sex, murder, and money on his mind, Sleep With the Devil finds Day Keene entering Jim Thompson and Flannery O'Connor territory.

Les Ferron leads a double-life as muscle for a bookie in New York City, and as a door-to-door Bible salesman named "Paul Parrish" engaged to Amy, a farmer's daughter in the small puritanical town of New Hope, north of New York on the Hudson. Les has a plan to knock off his bookie, marry Amy and get her old man's land, then sell the land and high-tail it out of the country as a rich man. Everything depends on Les keeping his identities separate, but the closer he gets to pulling off his scheme the more his two lives threaten to collide.

While Keene anticipates O'Connor's Bible-thumping con artist in "Good Country People" by a year (which was published in the June 1955 issue of Harper’s Bazaar), it is possible that he was inspired by Thompson. Two years earlier, in 1952, Thompson began a five-year run of twisted noir nightmares at Lion (the publisher of Sleep With the Devil) with The Killer Inside Me, followed by Cropper's Cabin (also 1952), and then The Alcoholics, Bad Boy, Savage Night, and The Criminal (all 1953), and continuing through 1957 with five more novels along the way. 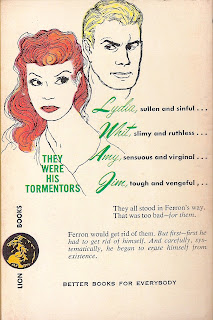 Thompson's use of deranged protagonists whose warped worldview takes over the perspective of the novel seems particularly influential on Sleep with the Devil. From the introduction of the main character in the middle of a church service day-dreaming about taking his fiancé's virginity and murdering her former romantic interest to the final scene of him weeping and laughing simultaneously, Les Ferron is a straight-up psychopath that seems more at home in one of Thompson's books than in one of Keene's characteristic "wrong man" thrillers. While Keene's protagonists were never saints, they were usually relatable-enough working class characters, proxies for the readers to empathize with. Sleep with the Devil is perhaps Keene's most experimental novel, in which he jettisons his usual narrative devices and thematic tropes in order to get inside the mind of a narcissistic killer.

Once Ferron's plan gets underway, Keene's masterful touch is on full display as all of the elements begin to conspire against Ferron and he has to scramble to try and save himself. The only thing more beautiful than the design of Ferron's scheme is how it is undermined—Keene's sense of humor has never been more wicked than in the final pages of Sleep with the Devil. 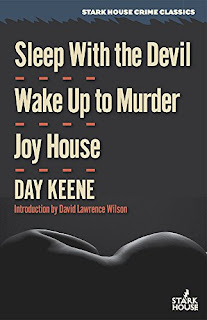 In his introduction to We are the Dead, one of Ramble House's collection of Keene's short stories, Ed Gorman praised Keene "for the sociology of his settings and his people. His books tended to be set in Florida or Chicago and he made sure you understood what it was like to live there." He singles out Sleep with the Devil's setting: "partly set in a Mennonite-like commune, [it] takes us into a world few of us will ever see. His snapshots of it are striking and difficult to forget." I agree with Gorman's assessment about Keene: when he's working with an environment that he knows, the details are vivid and realistic, and he integrates the geography of the setting into the stories. The dual New York City/Hudson River Valley communities are a striking contrast to one another, and represent some of Keene's strongest use of setting in any of his novels.

When the book was first released, Anthony Boucher praised it in his "Criminals at Large" column in the New York Times. Here is his full blurb about the book: "Day Keene, pulp-trained like [Fredric] Brown and [Cornell] Woolrich, brings vigorous pulp virtues to Sleep with the Devil (Lion, 25 c), an off-trail hard-boiled item which introduces a Manhattan criminal to the pastoral life of an obscure religious sect in the Catskills, with sex and violence skillfully integrated into a well-told story of character" (June 20, 1954).

Sleep with the Devil may not be your typical Keene story, but it is typical of his expert craftsmanship. It is currently in print from Stark House Press combined with Wake Up to Murder and Joy House.

Posted by Cullen Gallagher at 6:27 AM