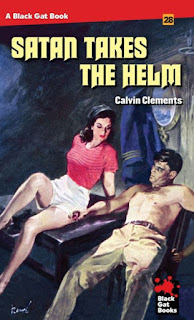 Stark House Press's Black Gat imprint has dived deep into the ocean of obscure vintage paperback originals and returned with a real treasure, one that was originally published in 1952 and has been out of print for decades.

Calvin Clements's Satan Takes the Helm is top tier Gold Medal thriller and exemplifies the hard-edged, tightly plotted, noir-laced thriller style that defined the imprint in its early days. It's a sea-faring murder mystery whose every paragraph is saturated with salt water, human sweat, and smoldering sex. Like a nautical James M. Cain, Clements writes characters desperate past the edge of reason, whose carnal thirst for survival drives them to lust and murder. Think The Postman Always Rings Twice or Double Indemnity but with its characters trapped on the same ship and you'll have an inkling of the claustrophobic sexual tension and paranoid jealousies fueling Satan Takes the Helm. This book is as noir as they come.

The story begins on Fisherman's Wharf in San Francisco. Martin Lewandowski is an out-of-work, down-and-out sailor. At a bar, he gets a tip that the Eastern Trader is holding interviews in a nearby motel for Chief Officer. When Martin gets to the motel room, he discovers the interviewer is an attractive brunette wearing nothing but sheer undergarments. At first incensed by his intrusion, Joyce agrees to hear his qualifications for the job and, much to Martin's surprise, gives it to him. "This job calls for someone young and a bit hard-boiled, someone who wouldn't be to squeamish about cutting expenses to the bone—and a little beyond when called for. I presume you know what I mean when I say a little beyond?" 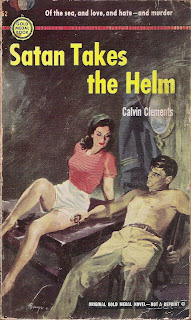 Martin thinks he know what Joyce means—but then he discovers that she is Joyce Sloan, the much younger wife of Ezra Sloan, the elderly captain of the Eastern Trader. Ezra's failing physical and mental health is making it difficult for him to run the ship. Joyce promises Martin that he'll have free reign on the freighter, and that they'll be seeing each plenty. Good fortune quickly goes to Martin's head—he pushes the crew harder than they're used to; he fires the third mate and hires an old friend, a drunkard aging sailor named Pappy Garrett; and he starts seeing Joyce in his cabin every night. And then Martin's luck runs out: Ezra has found out about his wife's infidelities and fires Martin, intending to leave him at the next port. It's only then that he finds out what Joyce meant by "a little beyond"—when she starts dropping hints about how if an accident befell her husband then the ship would be all theirs. . . "Master and owner. You could taste the flavor of the words. The cherry topping the whipped cream. You couldn't almost commit murder for something like that. Almost."

Clements, who was a New York City fireboat pilot for twenty years before he turned to writing full-time, imbues Satan Takes the Helm with an atmosphere so authentic you can smell the ocean air. There's a real lived-in quality to the details, the job duties of the crew, and the maintenance of the ship. The plot is pretty straightforward, but Clements uses patience wisely, using the time to describe work-life aboard the freighter in order to build the seething pressure between the characters. Satan Takes the Helm is a slow burn towards an unavoidable collision between its protagonists, and Clements holds the tension right until the last page. 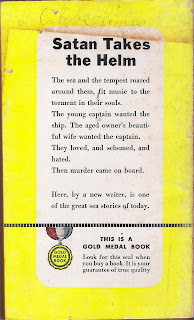 "No, I'm not bitter. This world is composed of a certain percentage of bastards and always will be. Nothing will ever change that. You can yap about it and scream your head off. You can even go out to break one particular bastard in two. But if you do that you're silly. There's another born that very second to take his place. The trick is to be just a little bit of a bastard yourself so you won't get hurt too much."

After making his literary debut with Satan Takes the Helm in 1952, Clements penned two more thrillers for Gold Medal, Barge Girl in 1953 and Hell Ship to Kuma in 1954, and Dark Night of Love for Popular Library in 1956. After that, he transitioned to being a screenwriter, scripting episodes for many shows including Gunsmoke and The Rifleman, as well as the feature films Firecreek (1968) (a terrific western starring James Stewart and Henry Fonda) and Kansas City Bomber (1972) (the Raquel Welch roller derby classic). Kudos to Stark House on resurrecting the literary career of Calvin Clements!