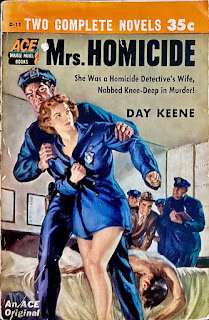 Day Keene's books for Gold Medal and Lion are some of his most ambitious offerings—larger in scope, atmosphere, setting, plot, as well as experiments and deviations from his style. His books for Ace and Graphic were more blunt, straightforward, a little more crude, less polished, sometimes more graphic in their depictions of sex and violence. They're more repetitive, formulaic, recycled. In this sense, the Ace and Graphic books are somewhat more representative of Keene. His 1953 Ace paperback original, Mrs. Homicide, is a classic example of the author's style.

Connie Stone, wife of New York City Cop Herman Stone, wakes up naked in bed next to a dead man she claims to have never seen before. Witnesses, however, say they have seen her with the man, a blackmailer named Lyle Cary, at his apartment, as well as in bars around the city. Some of Herman's co-workers even saw them together. They tell him that all women are alike, and that he should get drunk, have a weekend fling, and forget about his wife. He tries that—but he wants to believe her, so he starts asking questions around town, from Greenwich Village to 52nd Street's Swing Alley. Just when he thinks he has found the answer, someone saps him on the head, and he wakes up next to a corpse. Just like his wife did. Now the cops are after him, and he knows that Connie was framed, but in order to prove her innocence he'll first have to prove his own. 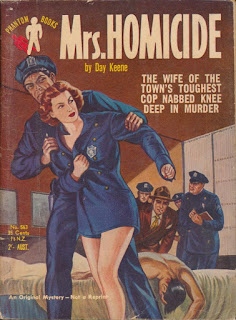 Mrs. Homicide is a killer Keene cocktail, with all of his classic plot ingredients—many in double. A double frame-up; two characters waking up next to corpses; a double-chase in which the protagonist is pursued by both the cops and the gangsters;  a strained marriage, and a spouse who distrusts their partner; copious amounts of alcohol; an urban landscape where Keene can display his affection for concrete jungles and neon-lit nightlife; a last-minute explanation of the plot (evoking John Dickson Carr's chapter-13 solution); and a pace that hits the ground running and stops only for a bedroom romp and a blackout on the floor.

Mrs. Homicide has a fascinating and complex intertextuality within Keene's body of work. The protagonist, Herman Stone, is one of Keene's series characters from his pulp days, though in the novel he works for the New York Police Department whereas in the stories he is in Chicago. Part of the plot, too, is cannibalized from a pulp story. The scene where Stone is knocked unconscious and his weapon and badge are stolen (which is how he is framed for murder) originates as a smaller scene in "The Corpse They Couldn't Kill" (Detective Tales, January 1945); Keene later reworked the bulk of "The Corpse They Couldn't Kill" into the novel The Dangling Carrot (1955), which was also published by Ace. 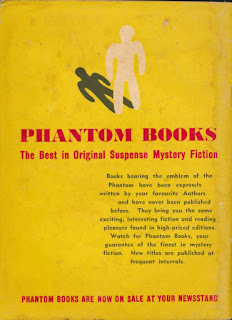 In a review of Dead Dolls Don't Talk, I wrote that "Fate is cruel and ironic in Keene’s world," referring to the plot twist of a jury member delivering a verdict of "guilty" and then, hours later, finding himself in the same predicament as the man he just condemned. Keene explores the same theme here, with a police officer who contradicts evidence and the professional opinions of his colleagues by believing in his wife's innocence. Keene is doubly ironic in that Herman winds up being guilty of the thing he initially suspected his wife of: infidelity.

One of the most interesting elements of Mrs. Homicide is the eventual reconciliation between Herman and Connie. Keene describes, "We kissed for a long time. Without passion. Just sweet. Knowing how it was with us. How it would always be." "Without passion" is such an unexpected detail, especially after the carnal desire expressed by Herman earlier in the book. Much like the reunions in Bring Him Back Dead and The Dangling Carrot, the moment isn't perfect or idealized, perhaps as a reminder that the underlying problems haven't fully been resolved. Solving the mystery may save the couple from either going to prison or being killed, but it doesn't fix everything. For someone so invested in fantastic scenarios like Keene, these are sobering moments of realism.