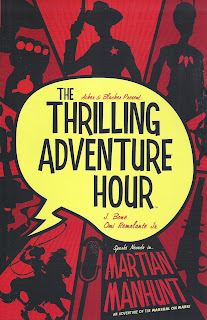 For fans of old time radio, the Thrilling Adventure Hour is a must-listen to podcast—(or must-see live show, if you were lucky enough to catch them when they were on tour, which I wasn't). There's Beyond Belief if you want a spooky, martini-fueled murder mystery—think Nick and Nora Charles from The Thin Man on a supernatural case. Or The Algonquin Four, set in the 1920s, re-imagines Robert Benchley, Dorothy Parker, Harry Houdini, and Woodrow Wilson as superheroes. There's many others, but my favorite of them all is the space western Sparks Nevada, Marshal on Mars. Marc Evan Jackson starred as the titular Marshal who, along with his alien sidekick Croach the Tracker (Mark Gagliardi), roam the frontier of the red planet chasing bandits, robots, aliens, and having all sorts of wild west adventures.

The Thrilling Adventure Hour radio show grew so popular that it eventually branched out to comic books, with several of its series expanding into an illustrated universe. Martian Manhunt collects five issues of the Sparks Nevada, Marshal on Mars comic, including the first (issue #0) which was initially released only digitally, "Flood at First Sight." Retitled "Prologue: The Marshal Meets the Tracker" in this collection, the story arc finds Sparks being called to stop a robbery by deputybots, only to discover they have a more fiendish plan: melting Martian icecaps. This arc introduces Croach the Tracker to readers not familiar to the show, and shows how Sparks saves his tribe which puts Croach under "onus" to the Marshal, a debt which becomes an on-going joke throughout the series. 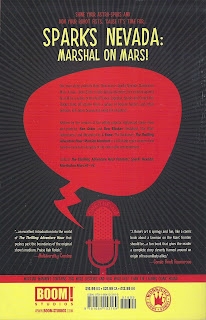 The rest of Martian Manhunt reprints "The Sad, Sad Song of Widow Johnson" (issues #1–4), in which Sparks and Croach escort a stagecoach carrying Wendy Johnson and other passengers and must protect them from the Butterfly Kid and his gang. This storyline features many flashbacks to Sparks's past when he was a student at the academy studying to become a pilot under his father, Captain Caiaphas Nevada.

On the page or in the airwaves, there's no such thing as too much Sparks Nevada, so I was very glad to revisit one of my favorite characters in the pages of this comic. It's a difficult radio show to adapt to a comic because so much of the radio show is built upon the amazing and inimitable voices of its cast and their impeccable timing, Martian Manhunt does a good job of interpreting the rhythms of its voice actors and conveying it on the page, I could hear Jackson and Gagliardi reading all of their lines. If you like western-sci-fi adventures like I do, Sparks Nevada is highly recommended, whether on the page or over the airwaves.

Sparks Nevada, Marshal on Mars originally ran from 2010—2016, but there are plenty of episodes online to listen to, and occasionally they even add a new special episode. Some episodes are available on Stitcher, and a more complete archive is available on their Patreon. Martian Manhunt, from Boom Studios, collects all of the current issues of the comic.

Martian Manhunt was written by Ben Acker and Ben Blacker, illustrated by J. Bone, colored by Omi Remalante Jr. and Jordie Bellaire, lettered by Marshall Dillon, and featured a cover by Scott Newman. It was published by Boom Studios in 2019.
at October 08, 2020