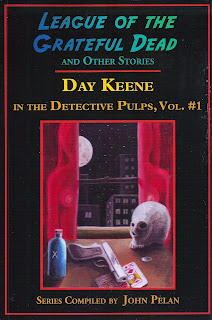 Editor John Pelan and publisher Ramble House have set out to restore the long obscured history of Day Keene in the pulps, embarking on a multi-volume series inspired by Dennis McMillan's amazing Fredric Brown pulp series. The first volume in their Day Keene in the Detective Pulps series is League of the Grateful Dead and Other Stories. Released in 2010, it gathers eight tales and an insightful introduction by Pelan.

The eight stories in League of the Grateful Dead show classic crime pulp at its finest. Tough-as-nails private eyes navigating twisty (and twisted) capers, engaging in blazing shootouts with ruthless gangsters, and trying to keep their necks out of jail—all while making it home for supper without compromising their wedding vows. They're paced so quickly that it's nearly impossible to keep up or follow all the clues—but it's sure fun trying. While the private eye cases are fabulous and most indicative of Keene's characteristic style, my favorite was actually "Nothing to Worry About," a vicious quickie tale about a husband's plot to murder his wife that features a wicked twist ending.

Fans of Keene will be especially interested in this volume for several reasons. Two of the stories were later expanded into novels. "Marry the Sixth for Murder!" was later turned into the novel Love Me—and Die! (1951, Phantom Books), and "Dance with the Death-House Doll" became half of an Ace double called Death House Doll (1954, Ace). This collection also features two of Keene's series characters: Private Eye Tom Doyle appears in three stories, while another P.I., Matt Mercer, appears in one.

The adaptation of "Marry the Sixth for Murder!" to Love Me—and Die! is a mystery of its own. James Reasoner writes on his blog that, "According to Gil Brewer’s stepdaughter, Brewer ghosted this novel for Keene, expanding one of Keene’s pulp stories to book length. . . . This seems pretty feasible to me. Keene and Brewer were friends, and since Keene was already an established writer as the Fifties began, with more than ten years as a popular pulp author under his belt, I can easily see him farming out this expansion to Brewer." I've yet to read the novel, but I'm looking forward to doing so now that I've read the original story. 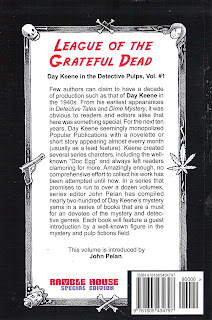 Here's a run-down of the stories.

"League of the Grateful Dead" (Dime Mystery Magazine, February 1941) — Mummified corpses are popping up all over Chicago—and some of them had already been dead for weeks! After seeing a B-girl turn into a mummy right before his eyes, journalist Tim Murphy follows her tip and heads to a cemetery to watch a performance by a local con artist calling himself Satan and who claims he can raise the dead.

(And, yes, according to Pelan this is the story that inspired the name of Jerry Garcia's band.)

"As Deep as the Grave" (Detective Tales, January 1946) - Chicago Private Eye Tom Doyle gets a call from a woman offering him $10,000 to kill a man that deserves it. She hangs up before he can find out who. Then he gets held up and taken to notorious gangster Red Faber who offers him $2000 to track down his wife and daughter, whom he abandoned years ago before they could find out about his true identity, in order to leave his daughter a piece of land before he is caught and executed by the state.

"Fry Away Kentucky Babe!" (Detective Tales, December 1947) - Private investigator Tom Doyle has a soft spot for veterans in a jam, seeing as he's a vet himself. So when Larry Reagan's wife pleads with him to look into her husband's case, he agrees. Larry is a journalist accused of murdering his editor, Ernie Jackson, over a dispute about a young woman named Ruby Thiels. As soon as Doyle arrives in Larry's hometown, however, someone takes a shot at him at the train depot, and then a "Mr. Big" calls his hotel and warns him to get out of town. Before he knows it, Doyle is knee-deep in a local organized crime racket.

"Crawl Out of That Coffin!" (Detective Tales, September 1947) - Private Eye Matt Mercer and his wife, Sherry, are grabbing drinks after a performance of Hamlet when a drunken young woman falls into Matt's lap—and with her comes a $10,000 contract to keep her alive for seventeen days until she turns 21 and can collect her multi-million dollar inheritance.

"Marry the Sixth for Murder!" (Detective Tales, May 1948) -- Johnny Slagle is a troubleshooter for Consolidated, a Hollywood studio. He gets a call in the middle of the night from Steve Millet, one of their contract stars, who thinks he killed someone in a hit and run on the night before he is supposed to marry a young actress named Cherry Gamble. When Slagle goes to investigate, there's only a dead dog. Millet thinks he dodged a bullet—but soon enough a body is found, Laura Jean Jones, another aspiring actress who moved to Hollywood hoping to be discovered. It looks like a cut-and-dried case, but when gambler Paul Glade offers $10,000 for Slagle and his wife, Sally, to skip town for a few weeks, Slagle knows there's more to the story.

"Nothing to Worry About" (Detective Tales, August 1945) - Assistant State's Attorney Brad Sorrel has a fool-proof plan to murder his wife: witnesses to prove he's somewhere else, and a planted car so he can sneak away to commit the murder and be back before his alibi is broken. He'll be a free man in half an hour—if only everything goes according to plan.

"Dance with the Death-House Doll" (Detective Tales, May 1945) - Sgt. Mike Duval on vacation leave from military goes to Chicago to visit the widow and child of his brother, who died in WWII. He finds that Mona is in prison and due to be executed in five days, accused of murdering a jeweler, but no jewels were ever recovered, and no mention was ever made of any child. First the cops pick him up and work him over, and then Mona's alleged gangster boyfriend, LaFanti, picks him up and works him over again, and both the cops and LaFanti want to know the same thing: where are the diamonds?

"Dead—as in Mackerel!" (Detective Tales, February 1945) - Private eye Tom Doyle's wife is expected to go into labor at any minute, when into his office walks burlesque dancer Dolly Adoree wearing a mink coat and not much underneath. She offers him $500 to listen to her story, and $20,000 if he takes the case. Mr. X, a wealthy 83-year-old man has offered to leave her $200,000 because she reminds him of his deceased daughter, only Dolly expects that his heirs will challenge this in court, if they don't try to kill her before. But before she can reveal who Mr. X is, Dolly drops dead in Tom's office.

Thank you to Patti Abbott for organizing Short Story Wednesday!