"Death March of the Dancing Dolls and Other Stories, Day Keene in the Detective Pulps, Vol. #3" (2010) - Short Story Wednesday 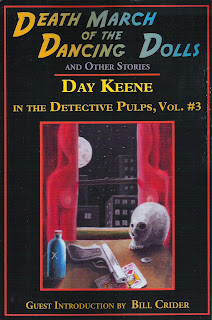 Ramble House's Death March of the Dancing Dolls and Other Stories, Day Keene in the Detective Pulps, Vol. #3 (2010) starts off with an introduction by the late Bill Crider, a superb writer and generous soul whose enthusiasm for old pulps and paperback novels was as infectious as it was enlightening. For me, this introduction had extra special meaning because Crider's blog posts were some of the earliest writings that I encountered about Keene. Reading his words brought a smile to my face, and recalled memories of reading about Keene on his fabulous blog.

Among the selections here are two stories with Keene's series character Doc Egg, a former pugilist who has hung up his gloves in order to open a Times Square pharmacy. From his counter at the Crossroads of the World, Doc crosses paths with plenty of characters, and invariably plenty of mysteries cross his path that he is compelled to solve, either to save his own hide or to help the NYPD. Keene describes Doc Egg as "a bright-eyed, bald little man in his late thirties with the suspicion of a paunch . . . reputedly worth a million dollars." An amiable fellow to his friends, always willing to loan a buck when he can, "he never forgot a favor or forgave a slight. If he couldn't whip a bully with his fists, e used whatever was handy. He and Lieutenant Dan Carter of the Times Square Homicide Detail had been friends since they had been boys." Not everyone on the police force likes Doc, however, and he usually has to outwit an officer who is trying to pin the crime on him.

Another series character that appears within these pages is Chicago P.I. Matt Mercer, a former Marine sergeant who now runs his own private detective agency. Matt lost his left arm during the Yangtze Patrol in 1936, and now has a cork-and-steel replacement, which can be used to deliver a wallop or to take a bullet, from time to time. Matt is married to Sherry and, like Keene's other Chicago private eye Tom Doyle (who also appears in one story in this collection), they have twins. Matt describes himself as "no little tin God. I've looked on the wine when it was red and done my share of wolfing and singing. But honesty is good business." Like Doc Egg, he's on good terms with some on the police force, and not-so-good terms with others.

The highlight of the volume for me was "The Charlie McCarthy Murders," which was later expanded into the novel Strange Witness (1953). The story is about a ventriloquist who gets out of jail and wants to get revenge on the gangster who framed him years before. One of Keene's finest short stories, it's notable for the myriad uses of the protagonist's ventriloquism to get him out of jams and solve the mystery. This story is also important because it represents the narrative structure that Keene would later use for many of his novels.  While much of his short story work was devoted to private eyes and cops who were solving other people's mysteries, this story is about an average guy who, through coincidence and misfortune, has found himself an ex-con with a target on his back. When Keene turned to writing novels, he mostly avoided the private-eye-solving-other-people's-mysteries motif (there are a few exceptions), and instead focused on stories in which the protagonist dealt with their own troubles.

"The Charlie McCarthy Murders" isn't the only story to be adapted to the screen from this collection. "Mighty Like a Rogue" was turned into a 1951 episode of Studio One in Hollywood directed by Franklin J Schaffner (future director of Planet of the Apes, Patton, and Papillon) and starring Tom Ewell (Adam's Rib, The Seven Year Itch) and Nita Talbot (Hogan's Heroes). "Mighty Like a Rogue" is my second favorite story in this collection, and it stands out because it's told from the criminal's perspective, a nice change of pace for Keene, and features a dark, sardonic twist at the end.

All in all, this is another strong collection of Day Keene's pulp fiction. Thank you, editor John Pelan and Ramble House, for reviving these previously unavailable stories. 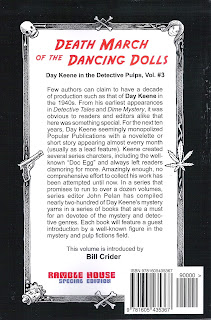 Here's are synopses of the stories included:

"Stay As Dead As You Are!" - Detective Tales, October 1946 - Zola Charters and her boyfriend, Tennant, return home to find a burglar in the apartment who steals all her jewels. She's afraid to go to the police because she's supposed to be on her way to Reno to marry Shad Ambler. Chicago P.I. Matt Mercer is called in to locate the jewels before the insurance company tells the police, and before Zola's fiancé discovers she was two-timing him. As soon as Matt starts to investigate his first witness, however, he is knocked unconscious and wakes up next to a corpse—and the police think he's guilty!

"The Charlie McCarthy Murders" - Detective Tales, March 1942 - Hart Jackson, ex-ventriloquist and night club emcee, was framed for murder. When he gets out of jail, a woman offers him $10,000 to marry her. As soon as they say their vows, she is gunned down, and her last words are about a little sister in hiding. The cops are after Jackson for the murder, the gangsters want Hart to say where the sister is, and Hart wants revenge on the man who sent him to prison.

"Doc Egg's Graveyard Reunion" - Dime Mystery, February 1946 - A naked man jumps off a freighter into the New York harbor then dies on the floor of a Water St. bar. A seaman walks into Doc Egg's Times Square pharmacy and starts shooting. Meanwhile, one of Doc's customers is a lawyer whose client is a woman about to be electrocuted for a murder she didn't commit. And somehow, Keene manages to connect them all through Shakespeare!

"Death March of the Dancing Dolls" - Dime Mystery, September 1945 - The Chinese Al Capone walks into Doc Egg's Times Square pharmacy and insults the food, so Doc knocks him cold—dead cold. Meanwhile, on the other side of the city, Doc's date for the evening, a dancer who recently toured China, is murdered. Who killed her, and why did they want to prevent Doc from meeting his date that night?

"So Sorry You Die Now!" - Dime Mystery, January 1945 - A pawn broker receives a letter from marine who died in combat months before containing a containing a torn fragment of a poem and a note to show it to private detective Matt Mercer. Before he can, however, two thugs come looking for the letter and beat him up. Meanwhile, a Hollywood actress comes to Matt claiming to be the deceased marine's wife and holding a second piece of the poem. Matt received a box containing the marine's uniform and gun, but no note. The thugs, however, don't believe Matt, kidnapping his twins and demanding that he produce the missing portion of the poem.

"A Minor Matter of Murder" - Short Stories, Dec 25, 1945 - Chicago Private Eye Tom Doyle will always give a break to a fellow vet, but even he's skeptical when Benny Schermerhorn, young GI, asks him to deliver $8,000 to the family of a decease soldier who refuses to accept that their son is dead. But when someone interrupts their meeting with a Tommy Gun and Schermerhorn and an old Iowan farmer waiting in the lobby are both murdered, and the $8,000 go missing, Doyle suspects that there's more to this than just money.

"Mighty Like a Rogue" - Dime Detective, January 1950 - Little Willy's wife, Connie, just got out of prison after doing nine months for a crime her husband committed. On her first night out, he introduces her to the gang, and she is hired for a badger scheme to seduce the district attorney that, if all goes according to plan, will end with his murder.